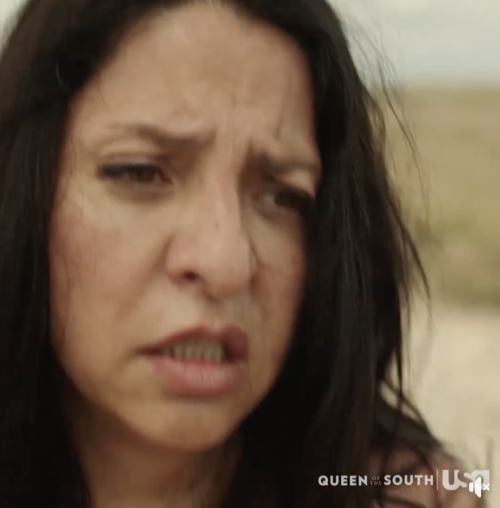 Tonight on the USA Network Queen Of The South airs with an all-new Thursday, September 6, 2018, season 3 episode 12 and we have your Queen of The South recap below.  On tonight’s Queen Of The South season 3 episode 12 as per the USA Network synopsis, “As she prepares for her Bridal Bath in Palm Springs, MJ continues to deal with the loss of her beloved father and becomes increasingly frustrated with Tommy’s lack of participation in planning their wedding.

Reza takes the plunge and invests a large sum of money into his new business—without telling Adam. GG is also starting a new business with help from Nema, who she begins to warm up to. Against his mother’s wishes, Mike also decides to take on a new business venture.”

Teresa arrives at the Phoenix Airport. She meets with Oleg to see if he will share his supplier connections with her. Her supplier went off the grid. After Malta, he refuses.

James brings Camila some clothing at the hotel where she is staying. James tells her Teresa is willing to hear her out. Meanwhile, Pote tells Teresa she needs to really hear Camila out. This is the only way. He tells her not to give up.

They finally meet face to face. Camila wants Teresa to kill Cortez. He has her daughter. In exchange, she will introduce Teresa to her connection. Teresa tells her that she will kill her if this is a trap.

Cortez is at his home having a drink with a woman. After she leaves, he starts to have trouble breathing. Meanwhile, Pote brings Camila to a cell. They exchange words when Camila says Teresa turned into her. Pote tells her they are nothing alike.

James tells Teresa that after they take out Cortez he is done with her. He cannot work for someone that questions his loyalty.

After being seen by the doctor, Cortez questions his staff and soldiers. He wants to know who would try to poison him? He shoots one of his soldiers in the head. One of the maids admits it was for Camila. He is a weak man and she always treated them like family. He attacks her with a wine bottle.

Camila introduces Reynaldo to Teresa. Camila vouches for Teresa. Reynaldo agrees to work with her if she doesn’t touch Camila and kills Cortez. After Teresa leaves the room, Camila tells Reynaldo that she is sure Teresa will harm her but she won’t go down without a fight.

Teresa tells Camila she promised not to harm her but she didn’t promise to give her freedom.

James, Pote, and Teresa get to work plotting how they plan to kill Cortez. Pote calls in a friend, Javier. They meet him and ask him about friends who can fight and guns. Javier’s boss Boaz wants to be in business with her and then he will help. She agrees.

Teresa tells Pote about James. He asks her if she asked James to stay. She didn’t. She meets with James moments later and asks him to run Phoenix. She wants him to stay. He tells her he needs time to think. He leaves for Mexico.

Teresa and Pote meet with Boaz. Cortez killed someone very close to him. If she gets Cortez, he will do anything she needs. She tells him she wants him to run Sinola with James. He agrees.

Isabella tells Cortez she hates her mother. He is her only family. Meanwhile, while trying to get George, James and Javier get into a shootout inside the prison. They don’t find George and narrowly escape. James calls Teresa. They were ambushed, Camila set them up.

Cortez touches base with Reynaldo’s niece who confirms Camila is working with her uncle. Meanwhile, Boaz calls Cortez and warns him they are coming for him.

Camila tells Teresa it wasn’t an ambush or a set-up. If it was, it was met for her.

Teresa calls Cortez to make a deal. She heads to his compound and speaks to him via video chat at his gate. They agree to share suppliers but split territory. She gets George and he gets Camila, but he cannot hurt her.