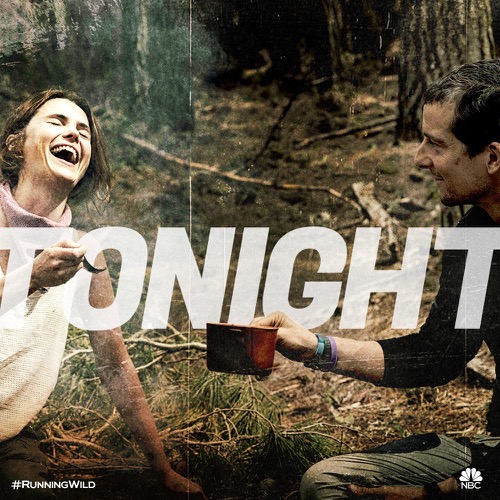 Tonight on NBC their new show Running With Bear Grylls airs with an all-new Monday, May 14, season 4 episode 2 called, “Keri Russell” and we’ve got your Running Wild with Bear Grylls recap down below. On tonight’s episode as per the NBC synopsis,“ Keri Russell joins Bear on a journey to the Canary Islands. After battling the dangerous, rolling rocks of a massive volcano, the duo descends into a mysterious canyon where they source a meager dinner of undigested seeds from a pigeon carcass and test their luck with a grappling hook to escape the canyon walls.”

For this trip, the pair headed to the Canary Islands that was originally settled by the Spanish. The Spanish had nicknamed the place where they were going as “The Island of Hell” because of the rough terrain, volcanoes, and the many dangers that await any and everyone. Bear told the audience at home this significant piece of history as he picked up Kerri at the bottom of the mountains. She had been told to accustom herself to the grappling hook she was asked to bring along and unfortunately she hadn’t gotten very far by the time the two met. Kerri had tried to understand it and it wasn’t something that needed to be understood. It was either learn it or risked dying when it’s actually needed. And so Kerri tried to learn other things on her ride up the hill with Bear.

Bear had told her that they were going to be grappling down a volcanic mountain to get a better look at the terrain and on their way they happened to hear some barking. The barking was from the wild dogs that were indigenous to the region and fun fact the Canary Islands weren’t given their name because of the canaries – they were given that name because of the dogs. The dogs were wild and could attack humans. Bear had done his best to scare away the dogs and it had taken them some time to realize he wasn’t backing down. They were going to keep on heading towards the pair until eventually, they relented. The dogs backed down and so that left Bear having to get Kerri through the hard part.

Bear talked her through what she had to do and had gone down first so that he could watch over her, but she surprised him in several ways. She had needed to clear her head and so he couldn’t tell her how this part was important or she was going to die. Meaning he had to change his teaching methods. Bear was used to telling people how to do it the same way the army told him how to do it and that wasn’t working with Kerri. She had needed to go through the instructions without any of the potentially scarring. Kerri got it, in the end, thanks to him changing his methods and she had been super proud of herself. She had decided to do the show because of her eldest child. River was ten years old and had wanted his mom to be a badass.

Kerri admittedly needed additional time to become one, only she still managed to do it and she had been ready for the next part. The two were moving over the mountainous terrain when they came across rabbit poop. Bear had honestly stopped to collect some of it because he said it made a nice tea and was safe for humans to ingest as long as it was boiled. He said that rabbits were different because they could ingest their own poop without a problem and that there were still nutrients in them. Maybe not as many as when it was real food, however, there was enough there to be food and so Bear put some in Kerri’s pockets. She had hoped afterward that they would food and instead they found even more stuff that grossed her out.

The two had to go down more mountain using their trusty grappling hook and that time Bear had allowed Kerri to go first, only she hadn’t tripped and had gotten down in good time. So the part that Kerri struggled with had been what they found at the bottom of the mountain. They had come across a bird massacre. Something had chewed it up and had left feathers all over the place which bothered Kerri and not Bear. Bear had actually seen an opportunity because he checked inside of the bird and had found seeds in the guts. He said that would go great with the rabbit poop in a stew and so the two drew straws to see who would have to carry their meal to the campsite yet Kerri had liked the plan until she realized that she drew the shorter straw.

Kerri had had to carry their “food” and she dreaded dinner that night. Thankfully, before the dinner came, they still had to climb up a mountain and so Bear let her throw the grappling hook that time. She had failed on the first few go and eventually got it even if it hadn’t been that perfect. Bear had gone up first and he saw that the grappling hook caught on a flimsy branch that could easily have snapped on him. It hadn’t, it just could have and so Bear decided to keep that part to himself. He helped Kerri come up the mountain and together they hiked until they began losing daylight. They knew that once they lost daylight that they would have to make shelter, start a fire, and cook dinner for that night.

Everything else had been easy for Kerri and she had the hardest part with their only meal. She had tried a little bit of the seed, guts, and rabbit crap stew and had hated it. Kerri said it tasted like textured barf and so she hadn’t had a lot of the meal which wasn’t good. Bear knew that she would need her energy for the next day and decided to get her something else to eat. He collected bugs that night and the next mornings they had charred crickets. Kerri hadn’t enjoyed that meal either, but she had to eat it because she needed the energy and so she had been ready when it came time to grapple up to the mountain. This particular mountain was the biggest one they ever had to climb and there were moments in which Kerri got tired.

What got her to keep going had been her arms. Bear told her to use the rope more than the mountain and she came to see this for herself. Kerri had been so proud when she got up the mountain that the part where they paraglide off it to the extraction point had seemed easy in comparison.