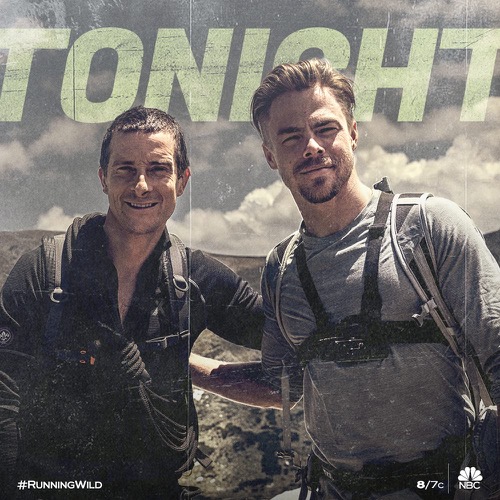 Tonight on NBC their new show Running With Bear Grylls airs with an all-new Monday, June 25, season 4 episode 5 called, “Derek Hough” and we’ve got your Running Wild with Bear Grylls recap down below. On tonight’s episode as per the NBC synopsis,“World of Dance” judge Derek Hough joins Bear on a whirlwind adventure across the mountains of Bulgaria. Dropped amidst snow-capped peaks, Derek and Bear must ascend a jagged mountain ridge, make a steep rappel with Derek’s cell phone as their only safety, and swim a freezing lake to reach their destination. Along the way, Derek reveals his struggles with being bullied as a child, his devotion to his craft, and teaches Bear some much-needed dance moves.”

Derek Hough met up with Bear Grylls in Bulgaria on tonight’s all new episode of “Running Wild”. The dancer and choreographer grew up wanting to be Indiana Jones and so he believed this trip could be that adventure he always craved. Derek got to the meeting point first which was an open field and he was coming across as nervous. His sister had once hung out with Bear and she warned him to do whatever the action man said or else. It was that ‘or else’ that was getting him and Derek wasn’t looking reassured until he saw Bear. Bear came in on a helicopter and the ride stopped just long enough to pick up Derek. Derek hadn’t known what would happen next and therefore Bear threw him when he later told him how they were leaving the chopper.

It turns out they weren’t going to slowly be let down but were gong to use some rope to scale down. Derek didn’t even realize he had a problem with heights until that moment. He eventually overcome some of that fear to scale down the rope and he landed just fine only he landed on a very tall mountain. He and Bear landed on a mountain that had them nine thousand feet in the air and moving under those conditions meant they would have go slower than normal. And before they went to the side, Bear instead wanted to go higher. He introduced Derek to rock climbing and, with barely time to process any of it, Derek found himself going up a mountain. He had almost gotten hit by a few boulders that came loose and so besides that he was fine.

It helped that Derek was extremely fit in everyday life. He joked to Bear that he was used to pick up women and swinging them over his head however that helped him with his upper body strength. Derek was able to finish climbing up the mountain without a problem and so Bear gave him a break. The two men just sat down and talked for a while. They talked about how Derek got interested in dancing and how J.Lo was one of the first crushes for the both of them. Then when they were ready to get a move on, Bear introduced Derek to what came next. The guys went to a very thin part of the mountain and there Bear told him they had to go down to get across. And they also had to do so within ten minutes or they risked injury.

Derek hadn’t been sure about that and he initially thought Bear was joking until Bear had Derek sent a timer on his cell phone. The cell phone would serve as a way to tighten their rope and it would come apart at ten minutes, so Derek manage to put a move on. He wasted a lot of time in the beginning and so the fact he made it down with a mere eighteen seconds to spare had been a miracle. The phone vibrated when it went off and so it just wiggled its way out of the rope where he it fell with the rope the men had just been climbing on. The phone was unfortunately damaged on its way down and thankfully Derek hadn’t been upset. He said it could be a keepsake to remember the trip.

The guys were able to finish climbing down without any backup and they were by the water when they saw dinner. Dinner for tonight’s episode proved to be frogs. Bear and Derek captured quite a few frogs and so they continued on their travels until it came time for dinner. Derek couldn’t handle seeing the frogs being cut up and so he sort of watched while hiding away as Bear cooked the frogs. He cut off the head and then cut them down the middle before placing them right into a boiling water in the fire. It was while he was cooking that Bear talked to Derek about moving to London at a young age and Derek revealed something not a lot of people knew. He was sadly bullied when he was a kid and it had been some intense form bullying.

It was so bad that it shouldn’t even be called bullying. Derek was tied up and hung in a tree for hours before his tormentors returned just to put a gun to his head. This happened when he was quite young and frankly those bullied liked serial killers in the making. Bear had even been shocked when he heard the tale because he never heard bullying that bad and so he was amazed that Derek could talk about the experienced so calmly. Derek on his part revealed that he had night terrors after the incident and that it took some time to put it behind him. The fact that he was able to do so was coming Bear found courageous. Bear wasn’t sure what he would have done if he had been in such a position and he told Derek how much he respected such composure.

The two later eat their meal of boiled frogs and Derek who hadn’t been that enthused about dinner had eventually warmed up to the taste. But after dinner when they both went to sleep, Derek kept waking up in the middle of the night because he thought he heard wolves. He tried to tell Bear and Bear said that they couldn’t be wolves despite sounding just like wolves. Derek had a hard time waking up the next morning because he had such a bad night and so Bear showed him just the thing to wake up. The guys needed to get to the helicopter and the only way to do that was to swim across a freezing lake. The swim had been painful for the both of them thought it did give a kick to Derek’s system to make him wake up.

Then after the freezing swim, the men trekked to the chopper and Derek thought that would be it yet there was one more surprise from Bear. Bear took Derek up into the air and then told him they were going to be skydiving down. That could have freaked out Derek and it didn’t. He thought it was super cool to go skydiving and so he smiled the whole way down he was so excited. There had been plenty of things that Bear introduced Derek to and during their time together Derek even managed to teach Bear some moves because Bear’s wife kindly asked him to.