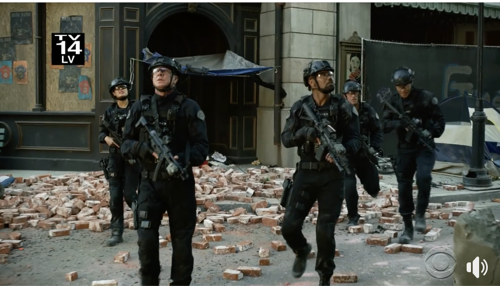 Tonight on CBS their new show S.W.A.T. inspired by the television series and feature film airs with an all-new Thursday, September 27, 2018, episode and we have your S.W.A.T. recap below.  On tonight’s S.W.A.T. season 2 episode 1 premiere called “Shaky Town,” as per the CBS synopsis, “The Season 2 premiere: The SWAT team engages in a standoff with human traffickers holding child hostages when a major earthquake hits Los Angeles during their operation and compromises the takedown. Also, while Hondo forms an unexpected personal connection with Deputy District Attorney Nia Wells, Jim Street has trouble adjusting to his new life as a patrol officer.”

S.W.A.T. begins tonight with illegal street racing, as Jimmy Street (Alex Russell) offers to join in the next race. Jim loses but doesn’t have the money and after he gets beaten, they strip his bike. Daniel ‘Hondo’ Harrelson (Shemar Moore) is at a bar, paying a tab when Nia Wells (Nikiva Dionne) joins him. She shares about the case she is working on, after talking about her stress briefly, he offers to buy her a drink and join him watching the game; she agrees.

Christina ‘Chris’ Alonso (Lina Esco) meets Jimmy after he calls her for help and she tells him to make things right with Hondo before he finds someone else for SWAT. Hondo wakes up at Nia’s place, who is thoroughly enjoying waking up with her but she is juggling a divorce and a stressful career, she doesn’t think he is the right choice for her right now. She reveals her almost ex is a Marshall and all cops come with baggage, like freezing people out. He takes his turn reading her, judging her being obsessed with her job. She thinks people who are great at reading people should never hook up, he denies that she is able to read him. She brushes him off and leaves.

Jim and his partner, Tony Larmen (Joseph Lee Anderson) visit an old lady who he comes to see every 6 months to help her chase a ghost away after she saw the police kill her assailant in her trailer. Jimmy doesn’t understand it but Tony tells him real policing gets down with their gun in their holster. Tony wonders why Jimmy is so sore.

Robert Hicks (Patrick St. Esprit) and Jessica Cortez (Stephanie Sigman) who feel they are being targeted by the new Commissioner, Michael Plank (Peter Facinelli). They are told they need to cut their budget by 15%.

Dominique Luca (Kenny Johnson) says they haul number 5 today and they are halfway through Metro’s Most Wanted. Hondo thanks Benny for riding with them while they are a man down. Chris walks in and tells everyone that Street says hello and suggests Hondo should ask Jimmy himself how he is doing if he is curious.

On the road, SWAT prepares for their next op, once at the scene, Victor Tan (David Lim) opens the door quietly and they sneak into the building. David “Deacon” Kay (Jay Harrington) chases and holds one suspect as another holds a gun to several children. Hondo pleads with him to let them get the kids out of the building as an earthquake suddenly hits the area.

Hondo tries to contact his team to assess the damage, as they got separated by debris. Everyone is okay, except for Deacon who is completely alone, his radio is busted and his leg is pinned. His suspect is pinned too and not a threat, he orders them to get the kids out; then come back for him. As they work to find and free the children, Deacon’s suspect wakes up and says he isn’t sure he is willing to help free Deacon’s leg. He points his gun at him, saying it’s going to be a long time them.

Hicks, Jessica, and Rocker (Lou Ferrigno Jr.) work together to coordinate how they are going to help the city and their people and keep the bad guys where they belong. Outside the structure, Hondo’s team works on how they can breach the building another way, sending Tan and Luca in other directions. Tan finds a bloody handprint suggesting the suspect has taken off, they split up to find the kids.

Deacon continues to work on his suspect to help him, saying if he helps him things will work a lot easier for him. He wants to go back to Haiti, saying his wife died in the earthquake in Haiti and explains how 1 out of every 50 children work for families. Deacon says that is slavery, but the man says it isn’t; they will do whatever to do to survive and he promised that he would find this man other children if he would help him feed his own. Deacon understands that he didn’t have a choice then, but he does now and maybe this is God’s way of giving him a chance to repent. Suddenly he realizes that one of the gas lines has busted and any spark will kill them both and the kids. The man pushes the rubble out of the way as Deacon begins to yell for Tan.

Tan finds the children, who are worried that the bad man has taken a child named James. Hondo and the team are alerted about the hostage situation. The suspect manages to steal a car, but James is able to stab him in the side before he is shoved in the car too. The woman who owns the car is able to tell Chris what happens and Hondo to put out a BOLO.

Jimmy and Tony are helping victims of a car accident when someone is screaming for help, a young child is stuck in a box while there is a live electrical wire in the water around her.; Jimmy jumps into action.

Hicks tells one of his officers to clear the squad cars from the motor pool to make room for the incoming victims. Jessica says all of their resources are overloaded to Hondo, revealing how much damage they know of. He realizes Nia could be one of the victims, but he is too busy in pursuit as they have a news chopper to help them follow the suspect’s car.

Jimmy jumps from the stairs and swings like Tarzan into the store below, rescuing Jan from the live wire, joking this is the best first date ever as an aftershock hits; Tony praises him for his work.

Tan informs the team there is a gas leak in the house. Deacon tells the man that telling his sons he saved a life would be setting a better example, sharing that he also has 3 children and a 4th on the way. It would feel so much better knowing he did the right thing. He yells at Deacon that everything he has done was for his boys. Deacon wants to know what the boys would want him to do?

Hondo and Luca are relying on the news chopper, but they lose their eyes when the car turns away from the freeway. The team works desperately to get the children out as the other suspect makes his way out the window with Deacon by his side. Deacon forces him to climb down the pipe first, but when he tries to run, he throws a flashbang and Chris helps him apprehend him. They work very hard to get all the kids out but one boy is terrified to come down until Deacon convinces him, the building explodes dropping Tan and the boy, but they are okay. Deacon learns about James being taken by the other suspect.

Hondo and Luca talk about the case as Hondo can’t think about his “friend” in the hotel. It suddenly dawns on Hondo that the witness said the kid stabbed the suspect, Drummond (Gene Farber) so maybe he needs to get patched up before he leaves town. They head to the hospital in the area, where they just miss him but learn the nurse told him about the helicopter pad on the bank next door. Drummond starts shooting at them in the stairwell and Hondo orders them to fly it right now but Drummond manages to get on.

Hondo jumps on the helicopter and attacks him, but the helicopter takes off, forcing Luca to grab on outside, hanging onto the bars. They viciously fight inside the chopper as Luca is able to finally climb in and hold him down. Hondo grabs the gun and demands to know where James is.

They race to the car and find him in the trunk, reassuring him that he is okay, but he doesn’t speak English. Hondo holds him tight as Deacon talks to his suspect who says if he plays ball with the DA and testifies to everything he knows he guarantees he will see his boys. Back at HQ, even though SWAT helped the Commissioner’s assistant find her daughter, they are still informed they have to cut their resources by 15%, minimum, disappointing Jessica and Hicks.

Street and Tony come by with Luca’s dog, saying his place is pretty trashed and he couldn’t leave him there. Chris hugs him, saying that was good of him; she pushes him to talk to Hondo and ask for another shot. Tony raves about how Jimmy saved the woman earlier today. Hondo walks in and Chris reveals what he did. Hondo asks if Jimmy is “all good” and he says he is. Luca leaves and Hondo says he is glad to see he is doing so well. Jimmy leaves as Chris exchanges looks with Hondo.

Deacon takes a call from his Pastor about the Priest who went to Haiti after the Earthquake, saying he needs to send some kids back to Haiti. Hondo goes to the hospital to check on Nia Wells, but when he gets to her room her husband is there, telling the nurse they were going to get divorced, but something like this happens and changes how you look at things. Hondo quietly leaves.

Jimmy looks at his stripped bike, while Chris returns to Hondo’s house which is trashed. She needs to talk to him about Street. He feels Jimmy hasn’t shown anything to prove that he wants nor earned his job back. Chris feels he was trying to reconnect back in the locker room and she is worried about him, lost without SWAT.

Hondo is worried too, but he needs to be more than just words. The door was never closed to him, but he can’t shut Hondo out and needs to own his mistakes. He understands that this is one hell of a job that makes it really hard to trust people and they hold each other’s lives and that is a hell of a duty, but he needs to see that Street gets that. He can’t force him to see that, he simply needs to be ready to get it!