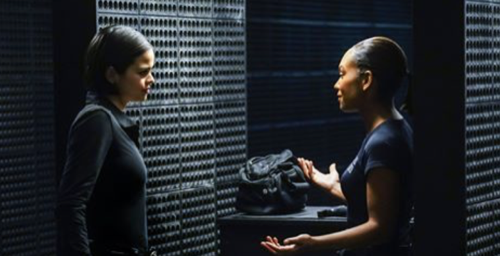 Tonight on CBS their new show S.W.A.T. inspired by the television series and feature film airs with an all-new Thursday, March 29, 2018, episode and we have your S.W.A.T. recap below.  On tonight’s S.W.A.T. season 1 episode 14 called, “Crews” as per the CBS synopsis, “The job becomes personal for Hondo when his criminal informant friend is killed while seeking information about a robbery crew that a joint SWAT and FBI task force is trying to capture. Also, when the FBI task force leader acts erratically, Jessica worries the woman’s behavior will endanger the team in the field.”

An armored truck is in the middle of a pick-up when they are robbed. Before the thieves make off they shoot two of the guards.

Hondo is at the gym lifting. An old friend (a CI) comes by. He tells Hondo about the recent armored truck robberies.

Hondo and the team meet. The guys are excited. They know that this is about the robberies. The SWAT team gets their gear and heads to a local check cashing place. The team gets in quick and finds a man in the back. He sees Hondo and tries to burn the money. Hondo identifies some of it as the money stolen the day before. Outside, Hondo gets a call. He heads to identify a body. It is the CI he talked to at the gym.

Hondo goes to see the CIs daughter Lana to tell her the news. Lana is angry that her father stuck his neck out for them and now he is dead. She is left to take care of her grandmother who has dementia. The last she knew her dad was at the casino earlier this morning.

Some of the team integrates Dale the suspect that arrested this morning trying to burn money. He doesn’t give them much to go on once he starts talking. The team updates Hondo who is at the casino watching video footage. They are looking for a guy in a snakeskin jacket.

Hondo and Tan find their man outside of a store with a young girl.

Alonso comes to see Cortez who is practicing her shot. Alonso tells her she is doing well. It’s tough. SWAT is a boys club.

Hondo runs into Kay. He tells him how guilty he feels about his CI. He was a funny guy who always made jokes about how lucky he was.

Hondo heads to interrogation to see the man in the snakeskin coat named Machine who was just brought in. They have a video of him near the CI. Hondo wants to know what he knows. He admits that he was approached by a man who asked him about washing money. He doesn’t know their names but he knows they run a tight ship.

The criminals behind the robberies talk about how they cannot find their runner Machine. One of them is worried. The other reminds him that Machine doesn’t know anything about them.

The team meets to look at the footage. It looks like the robbers know when the trucks are going to arrive. Cortez thinks that all of the trucks have something on them. Hondo gets to thinking. Maybe it’s the maintenance guys. Could they be planting GPS devices under the hood?

Lana comes into the station with her grandmother. Hondo tells her that if her tip about the casino pays off she will get 15% of the money they recover.

Dubois confronts Cortez. She is mad that she double checked the videos and had additional questions. She is a decorated agent. Cortex tells her she doesn’t care. She can tell she is abusing pain meds. She doesn’t want to have her team put in danger. Dubois tells her she is flushing her career down the toilet by making accusations like that.

SWAT sets up for their next bust after catching a lead thanks to the workers at the maintenance company.  They head out. They make a few stops. Nothing so far. They move on but hit a detour. Dubois thinks it is staged after she reads the wrong schedule. Cortez kicks her off the mission. Hondo and the others proceed. At their next stop, they see the robbers prepping to take them down.

The robbers make their move when the guards get out. They don’t know Hondo and Tan are in the back. They take the guards back in the truck and take the wheel. One of the robbers cannot start the truck. He finally gets it started. Honda has made his way to the roof of the truck. They take off. The rest of the team chases them down and forces them to stop. Guns are drawn. The robbers’ surrender.

Hondo meets with Lana. He tells her about the bust and the money she will be getting. She cries.