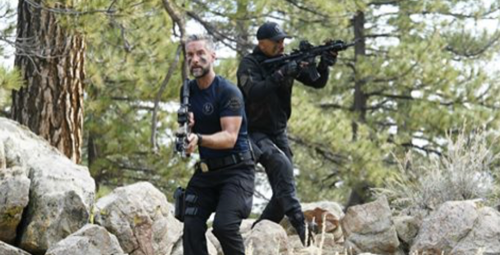 Tonight on CBS their new show S.W.A.T. inspired by the television series and feature film airs with an all-new Thursday, May 10, 2018, episode and we have your S.W.A.T. recap below.  On tonight’s S.W.A.T. season 1 episode 21 called “Hunted,” as per the CBS synopsis, “Hondo and Deacon must apply all their SWAT training and skills to evade a gang of armed mercenaries hunting them in the Angeles Mountains following an ambush. Also, Chris oversteps in an attempt to help a female SWAT trainee she suspects isn’t being evaluated fairly.”

The team was brought in to help when the Montrose Merc Crew targeted another gang on tonight’s all-new episode of “S.W.A.T.”.

The Mercs were low-level meth dealers. They weren’t considered a serious threat and everyone had pretty much dismissed them until they started making moves. The Mercs targeted the Jackals and the Jackals were actually a big deal. They were big-time guns, drugs, and motorcycle crew. The Jackals were so big that it had surprised everyone when they found out the Mercs have been encroaching on Jackal territory and that somehow were pulling it off. The Mercs were without leadership since LAPD sent in an under detective and the detective put away all of their top leaders, but the team figured something had shifted since then and so Deac said he could contact the former detective because he had been a friend.

The friend was Sam Hawkins. Hawkins had been Deac’s Commanding Officer until he left to take the undercover job, however, Deac knew that Hawkins wouldn’t mind speaking to him because Hawkins had always liked him. Deac took Hondo with him out to Hawkins’s cabin and they got to talking on the drive up there. It turns out Deac wanted to live out in the woods when he retired as well and Hondo said he never could do it. Hondo was a city kid and he couldn’t take all the woods or live off the land. Then again Hondo hadn’t gone camping with his father like Deac had. Deac said his father had taken camping every summer and that how came to love the outdoors. And so Deac eventually came to make fun of Hondo for being to the city.

Though Hondo also had a few things to say. He said he couldn’t give up his life in civilization when they saw Hawkins’s cabin and that he couldn’t have left his door open because only white people in the woods would do that yet Deac said a former cop would never have done and so that was their first sign that there was trouble. They went into the cabin and found evidence that Hawkins left in a hurry. The man had taken his gun and hadn’t taken his car which meant Hawkins left on foot. He also hadn’t taken any supplies and so it made no sense why he left on foot. Deac went back outside to call in the situation when they saw the gunmen in the woods and were forced to take cover. There had been nine men outside shooting at them and the cabin hadn’t been made to withstand that much gun power.

Hondo said that it was best they escaped before the men surrounded the house and Deac had disagreed, but he went along with it anyway because Hondo pulled rank. They caused a diversion and they got out of there in time. They were making their escape into the woods when Deac asked if those men had taken out Hawkins and Hondo told them that wasn’t possible. Hondo said if they had Hawkins they wouldn’t have been hanging around afterwards and so Hondo knew that Hawkins was out in the woods possibly hiding as well, so the two men used Deac’s hunting knowledge to track down Hawkins’s lookout and as they were doing so they were missing out what was going on back at base.

The other members of Hondo’s team had been asked to assist Mumford’s team with locating the Mercs involved in the shooting that morning. The men had taken off on feet as well and so they were able to follow them back to a church because of a dog. A dog started barking at the men that went through its owner’s yard and so that dog helped them quite a lot. They were able to arrest the Merc and more importantly they found a hit list on them. The Mercs were going after prominent members of the Jackal and the team wanted to know why. They hadn’t heard back from either Deac or Hondo and so they relied on what the Mercs were willing to tell them. The men hadn’t wanted to talk until Cortez convinced them that it was safe.

Cortez found out that the Merc went after someone at a secret Jackal hideout. The only ones that know about that place were the Jackals and the cops, so Cortez had an idea why the Mercs in custody didn’t want to talk and she decided to it. She had the cameras in the interrogation room turned off and the room cleared. Cortez did this in front of the suspect so that he knew it was safe to talk and so that’s when he revealed that a cop was running the Mercs. He said the cop had been part of a crew until he disappeared when everyone was getting arrested and so they hadn’t known he had been a cop until he reentered the fold. Hawkins had told them all that he knew how to work the system and that’s how he was able to come to power.

Cortez knew when she heard Hawkins’s name who he was talking about and so she immediately sent out a team to look for the men that had been missing by then for hours. Except Hondo and Deac had found Hawkins and not long afterward they saw right through him. Hawkins claimed he had been out in the wood when two Mercs almost got to him and that he had taken off to his lookout to wait things out until it was dark enough to move though Hawkins later asked them why they thought the Mercs went after the Jackals and neither of the guys had ever mentioned it was the Jacks. That’s when they knew Hawkins played them and so they ran off when Hawkins told his men to move in.

The men jumped off cliffs, matched themselves up, and were figuring out what to do next when they got into an argument. Hondo wanted to climb to a high point so that the rescue helicopters (when they came) would find them and Deac refused to climb to the mountain. He said it would leave the vulnerable and so he refused a direct order. Something he happened to have done before. Deac and Hondo had constantly butted heads since leaving the cabin and so Hondo demanded to know what got into him. Deac it seems hadn’t really put the past behind him. He was in a position to become a team leader and they passed over him because of someone’s else mistake.

Deac hadn’t like feeling like that, but it still hurts every now and then. So Hondo told him how he had to be twice as good as everyone just to get half the credit and that he never went camping with his dad because he dad had actually left his mother when he was a teenager. Hondo hadn’t made choices after that and the choice he did make was to do things properly. He took care of his family the right way and he was never going be sorry about the taking job because it wasn’t an offer he could turn down nor should even think that. And so the men made peace as they head up to the mountain, they even got into a shoot-out like Deac expected and they were holding ground when rescue came.

The rescue team was able to find them because they released a flare and, with reinforcements, they were able to arrest the remaining Mercs except for one. Hawkins hadn’t wanted to come in alive and so he forced them into killing him. That part had been hard on Deac. Deac used to admire the man and afterward all he wanted to do was go home however he made sure to invite Hondo over for dinner. There was a lot they still needed to learn about each other and they were willing to do that now that both admit they made mistakes in how they treated the other. And while Hondo and Deac had had an ordeal to fight with, the rest of the team were celebrating that Erica Rogers made into SWAT. She had always wanted to join and an old incident came close to ending that dream for her yet Chris and Luca saw to it that she got a fair shot and so her making it was a win for them!