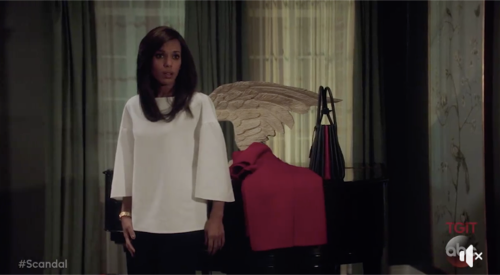 Tonight on ABC Scandal starring Kerry Washington continues with another exciting episode in an all new Thursday, February 8, 2018, season 7 episode 11 called, “Army of One,” and we have the Scandal recap for you below. On tonight’s Scandal season 7 episode 11 as per the ABC synopsis, “Mellie’s plans to name Jake as her new chief of staff only propels Olivia to do whatever it takes to make sure that does not happen. Back at Papa Pope’s house, Quinn becomes restless, wondering just how long Rowan intends to keep her and Robin hidden from the outside world. Meanwhile at QPA, Abby, Huck and Charlie decide that it’s time to move forward with new clients when their first case leads to surprising intel.”

Liv admits to Mellie that she killed Rashad. Mellie is sick of her lies. Liv swears it is all Jake coming between them. Mellie tells Liv she has to go. Mellie gives her one week to announce her resignation or she will announce her termination. Liv leaves speechless.

Jake and his wife are sitting with David. Jake will be the new Chief of Staff. David wants to know if he has any secrets that could come out. Jake admits that he and his wife have an open marriage.

Charlie shows up at the office. They have a new client, the Director of the NSA who received a bonus from what looks to be a Russian source.

Jake summons Mellie to his office. He tells her his tools are now her tools. The room goes black. It is Liv. She has taken command. Jake calls her and tells her she is going to lose if she wants to play this way.  Jake has IT come in. She is having trouble getting the system back up.

Cyrus meets with Mellie. He wants to know what Jake has on her. She tells Cyrus she wants Jake there. Mellie tells him that Jake is here to stay. He needs to get on board.

Rowan is rocking the baby. Quinn comes in and tells him that they need to make their move and take Liv down. He doesn’t want to yet. Quinn calls him soft. He gets upset.

Liv lets loose the details of Jake’s wife’s extramarital affair. She is sleeping with the director of NSA and selling state secrets. Abby, Charlie, and Huck watch the news reports as their client sits in front of them. Liv calls Jake. She has written his letter of resignation for him. He tells her this needs to stop. She laughs.

Mellie, Jake, and Charlie meet the next day. Mellie is beside her. They all know it is Liv. Mellie wants them to make it go away.

Liv comes to see Cyrus. He calls her his enemy. She needs his help. He is her secret weapon.

At the office, Charlie and the team work to prove Liv is the one who sent the money to director of the NSA, who is also there with Jake and his wife at the same table.

Jake meets with Mellie. Cyrus shows up. He has a way out of this situation involving Jake and his wife Vanessa. They sit to listen. Later that night, Vanessa is on the local news. She gives an interview where she tells the public she was playing spy for her husband because she knows the director of the NSA socially and that is all. Liv throws the remote at the TV.

The director of the NSA is livid he has been painted as a Russian spy. Cyrus shows up at Liv’s house. He has a way to take down Mellie, making himself president with Liv back in the White House. She cannot believe he would be willing to take down Mellie. He tells her this is the only way.

Quinn offers Rowan a deal. If he lets her, Charlie and the baby go, she will leave Liv alone.

Liv visits Mellie before her mammogram. She shows her the file she received from Cyrus and tells her she won’t be resigning but calling for Mellie’s resignation instead. Mellie is shocked, scared and speechless.

Abby and Huck tell Charlie that aren’t so sure they want to keep the office going without Quinn. He tells them to wait and rushes to Rowan’s. He calls her name at the window from outside. Rowan comes out and puts a gun to his head. He asks him what he is doing. Quinn left an hour ago to meet up with him.

Liv comes home and finds a baby in her living room. Quinn comes in from behind with a gun. She tells Liv she is going to sign a piece of paper admitting to all of her wrongdoing. She is going to jail. Quinn points the gun at her. Liv warns her that there are snipers outside watching. They shoot, Quinn and Liv flail. Liv gets hit. She is bleeding. She yells for Quinn to leave with the baby.

Mellie meets with Jake. She tells him Liv knows everything.

Liv shows up at Rowan’s. He bandages up her wound. Liv cries – Quinn hates her. He comforts her.

At Liv’s press conference, she takes the podium and announces her resignation. Meanwhile, Jake’s system comes back up. Quinn shows up at the office with the baby and Charlie. Abby and Huck cry.