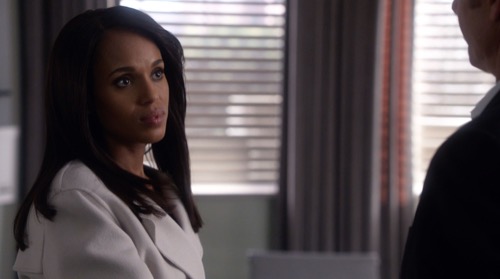 Tonight on ABC Scandal starring Kerry Washington continues with another exciting episode in an all new Thursday, March 29, 2018, season 7 episode 15 called, “The Noise,” and we have the Scandal recap for you below. On tonight’s Scandal season 7 episode 15 as per the ABC synopsis, “When Charlie is taken into custody for the hijacking of Air Force Two, Quinn is faced with an important choice. Meanwhile, Cyrus is pulling the strings behind closed doors and sets out to recruit Jake to join him on his quest for the White House.”

Charlie is still in custody. They offer him a plea deal. He just needs to confess to trying to kill Cyrus. He tells them to go to hell.

Quinn opens the door to see Liv. Quinn wants to partner up since they have a common enemy. They meet with Fitz. Quinn tells him how Charlie is being set-up.

Liv heads to a room where Quinn and the others plan to meet to try and help Charlie. She sees Huck. Things are awkward between them. Abby and the others arrive and start working asap on freeing Charlie. Cyrus reaches out to Quinn. She meets him in a car so they can talk.

Cyrus wants Charlie to sign a confession. Quinn is beside herself. She demands he let Charlie go. Cyrus tells her to watch out for Liv. She is in it for herself.

Fitz tells Mellie what he knows about Cyrus and how he tried to bring down the plane. Mellie doesn’t buy it. She thinks Liv was behind it.

Quinn returns to see Abby and the team working. She tells them that Cyrus offered Charlie a deal. They will give him immunity for his cooperation. Liv cannot believe they are thinking of taking it. Quinn reminds her that this is about her family. Liv leaves angry.

Cyrus gives a press conference. Mellie watches with curiosity. She meets with Jake. She tells him all about Liv and how she now suspects Cyrus might have been behind it all. Jake isn’t quick to agree. Mellie tells him to look into it.

Jake meets with Cyrus. Shockingly, Cyrus comes clean and tells Jake he plans to take over the oval and he has a job for him. He tells him to think about it.

David meets with the Attorney General. He wants to know why he is doing this. Does Cyrus have something on him? His son is why he does it.

Mellie vents to Marcus. She doesn’t know what to do or what to think. She does miss Liv. Marcus reminds her that he is here for her.

Liv heads to see the old office. She looks around at the place she created. Quinn shows up. Liv tells Quinn she is sorry for all that happened. Whatever Quinn decides she will back her. Quinn calls Cyrus. She cannot advise Charlie to take the deal. Cyrus lets her go. Jake is in his pocket.

Jake visits Charlie. He tells him he needs to sign the confession or it is Quinn’s life. Later, Mellie comes to Jake. She is hysterical over what Cyrus us pulling. Jake tells her she has no control. She realizes that Cyrus has gotten to Jake.

Mellie meets with Liv secretly. She asks her to be her command again.