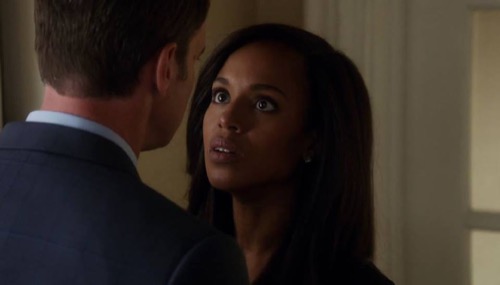 Tonight on ABC Scandal starring Kerry Washington continues with another exciting episode in an all new Thursday, March 8, 2018, season 7 episode 13 called, “Air Force Two,” and we have the Scandal recap for you below. On tonight’s Scandal season 7 episode 13 as per the ABC synopsis, “When Cyrus and David embark on a trip to Lisbon for the digital piracy summit, their plane is hacked, leaving their friends and colleagues on the ground little time to save them.”

Cyrus is in Mellie’s office. He is mad that she is sending him to Lisbon when where he really wants to be is at the Al Smith dinner where he can strut his comedic talents. Jake is going in his place which makes him angrier. He is threatened that Jake is slowing taking his place.

David is getting ready to leave the house. Before he goes, he and Abby talk. He is headed to the same summit as Cyrus. He tells Abby he made them expensive reservations at a chic restaurant. She asks why. He tells here that they have both been working so hard. Abby heads into the office and tells Charlie and Huck that she thinks David is going to propose.

On the plane, Cyrus and David are informed that the plane has been hacked. Meanwhile, Charlie and Huck hack David’s bank account and discover that he has been jewelry shopping.

Liv arrives at her mother’s with dinner to celebrate her birthday. She tells her mom that she is going to stay and eat with her. Liv’s phone rings. She ignores it, surprising her mother.

The gang watches the press conference covering the plane hack. Beside the scenes, Mellie and Jake try to figure out what is going on. On the plane, Cyrus informs everyone that their communication has been cut off from the ground. They have determined that the virus was brought on to the plane through a device currently on board. Cyrus’ aid tells him she thinks her device may have a bug. As he tries to get more details, the plane makes a sharp turn throwing them to the floor.

Cyrus calls David into a room to talk to him privately. Cyrus tells him about his aid’s possible virus. Cyrus thinks Jake is behind all of this. They talk to a lieutenant on the plane and get her to send the malware code to Quinn and the others.

Mellie thinks Jake is up to no good. She tells him to get out of her sit room. Meanwhile, Quinn sends Abby away from their work area.

Mellie tries to get in touch with Liv but no answer. Liv’s mom wants to know why she is really here? It isn’t her birthday and Liv should know this.

Cyrus tells David that they need to prepare for the worst. Meanwhile, a reporter on the plane asks if Wi-fi was turned on. She saw the signal quickly. Everyone is asked to take their seats. Cyrus talks to everyone about their freedom, the nation and the possibility that they may be shot down to avoid killing thousands in a heavy populated area. While he speaks, the reporter is live streaming. Abby, Liv and the others all watch.

Liv’s mother is mad at her because she is upset over the plane. Meanwhile, Mellie asks Jake if he had anything to do with this? He does not. Cyrus takes his seat with David. The jets following the plane are pulled back. Charlie gets into the program.

David comes home to Abby safe and sound. She tells him to just get it over with and propose. She had time to think and she wants to do it. He laughs. Unless he wanted to lose her, he wouldn’t propose. He knows her to well.

Liv gives her mom the gift of freedom, a one way ticket to Paris and a Swiss bank account. She goes to visit Cyrus who inadvertently admits the plane antics where all his doing. He laughs at Liv’s idea that this was all for his presidential bid years down the road.