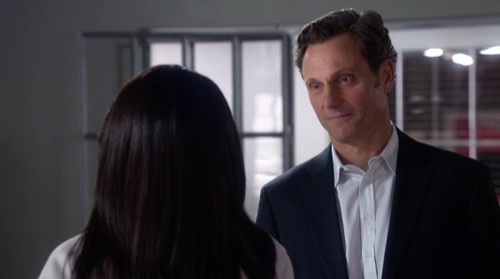 Tonight on ABC Scandal starring Kerry Washington continues with another exciting episode in an all new Thursday, April 12, 2018, season 7 episode 17 called, “Standing in the Sun,” and we have the Scandal recap for you below. On tonight’s Scandal season 7 episode 16 as per the ABC synopsis, “Cyrus and Jake’s mission to take the White House reaches a new level of deceit when Liv is called to testify against Mellie.”

Liv gets dressed, she tells Fitz that whatever happens to Mellie is going to affect him too. Fitz asks her how does she think it is going to end. Mellie’s lawyer doesn’t want her to answer questions but to exercise her fifth amendment rights. Liv, on the other hand, is telling Mellie to answer the questions and doing anything else is going to make her look guilty. Liv tells Millie that the truth is her armor. Time for questions, Millie is asked why she fired Liv, Millie said she didn’t. Millie said they were just tensions, then she is asked if these tensions were because Liv had a plot to kill President Rashad.

Liv says she doesn’t know what they are talking about. All of a sudden she is shown a video of Millie and Liv talking. Millie asserts her fifth amendment privilege. The lawyer hands Liv a subpoena, she will have to answer questions the next day and testify against Millie. In the oval room, Millie is upset, Liv tells her that Congress knew about that tape before they did.

Kate visits Quinn and tells her that Liv has been subpoenaed and wants to know if she has a comment because she is the one who leaked that Millie had fired Liv. Quinn tells her to take the door, even though Kate offers her money.

Liv gets home and Jake is there, she asks him if she is supposed to be afraid of him because he was sitting there in the dark. Jake tells her he has a gift for her, it is a vial of sand, she doesn’t want it. He says he wouldn’t call himself a happy person, but he was happy once in the sun standing in the sand with her. Liv tells him they never really had a chance. He tells her that he is going to take what is his and tomorrow she is going to tell Lonnie that she killed President Rashad at Mellie’s request and he will make sure that she is pardoned the moment that Cyrus becomes President.

Abby, Quinn and Liv are trying to strategize to expose Cyrus but all roads lead back to them. Liv goes for a walk alone and looks back at her life, she then heads to her questioning. She asked right away if Millie gave her a direct order kill President Rashad. Mellie says no, she is is the one who gave the order on behalf of the Republic B613. She is asking them to believe that there is deep state intelligent agency that controls the White House.

Lonnie asks Jake questions and tells him he is going to be served, Lonnie can’t find any of the equipment, Jake tells him to forget about B613 and he buries Liv’s statement. Jake tells Lonnie to walk away. Meanwhile, Mellie asks Liv if she has lost her mind. Liv tells her that the truth has to come out and they have to tell everyone about the underground world and it is bigger than any of them.

Mellie is upset, she does not want B613 to get out. Liv, on the other hand, is insistent that this is the only way to take down Cyrus and Jake. Fitz interjects and tells Liv that her ludicrous confession would have them lose all their power and undermine everything he has done. Liv tells them that they are the villains and the only way to be a hero is, to tell the truth.

Liv goes to see Quinn for help. Quinn goes to see Kate and enlists her help but she refuses unless Quinn shows her evidence. Jake goes to see Rowan, he tells him that Liv is an unfortunate casualty. Rowan tells Jake that he thinks victory is his but something is missing, he needs his applause to fill the holes. Rowan tells Jake off and Jake pulls his gun.

Rowan laughs and says that nobody took command because it is trapped in his bones. Rowan tells him to run along and leave him with the other dinosaurs. Jake pulls the gun out and points it at Rowan’s head, tells he can kill him right now, Rowan says he won’t and he will be there for him when he falls. Jake tells Rowan to stay out of his way. Fitz goes to see Liv and tells her that he wants to help. He says at least they figured out how the story ends, it ends with them. Kate reports on the news about B613, Liv and Mellie know it was the right thing to do.