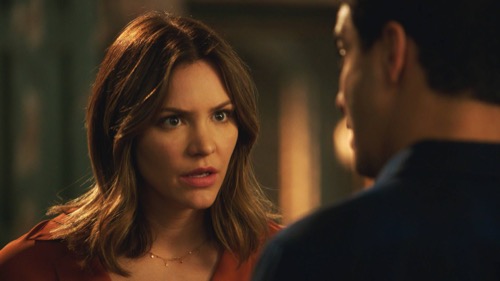 Tonight on CBS their hit drama/comedy Scorpion airs with an all-new Monday, April 16, 2018, season 4 episode 22 and we have your Scorpion recap below! On tonight’s Scorpion season 4 episode 22 finale called, “A Lie in the Sand,” as per the CBS synopsis, “In the Season 4 finale, Team Scorpion heads to Northeast Africa where they must carefully navigate a minefield in order to save the lives of local villagers. Also, Paige and Walter’s relationship takes a shocking turn, and Toby and Happy make an important decision.”

Cabe arrives at the warehouse to find Toby with his pants down. Happy is giving him a shot. It is for solidarity. If Happy has to get fertility shots he does too. Paige comes in. She asks Toby and Happy about Walt’s lecture. She is trying to get tickets.

Happy and Toby run to Walt and tell him that if she keeps digging around the lecture situation she will find out he went with Flo. Walt tells them that there is no way she is going to find out.

Sly comes in. He has an emergency. His pen pal Alex is in trouble. Sly videos him. Alex tells them that his close friend and leader who is in the midst of peace talks is in heart failure. The generator helping him stay alive is running out of fuel. They cannot get more fuel because the trip there is filled with landmines. Toby thinks they could spray it with bacteria that will eat the landmines.

They arrive at Alex’s village. They have less than 2 hours until the fuel runs out. They load up and head out. Alex tells them before they leave the elder leader must look at them and deem them pure. He does, but Toby wants to stay behind. He thinks the elder has been misdiagnosed.

Out in the field, the team sprays the bacteria everywhere while Sly detects the landmines. They begin to drive, avoiding the landmines as they spray ahead of them. Meanwhile, Toby tries to tell the doctors treating the elder that he does not have heart failure.

The others reach the fuel stop. Many locals are hysterical, yelling about a sandstorm on the way. Now they have to race a sandstorm and try to get back on time.

The team calls Toby. He warns everyone on his end. The team gets moving back through the landlines. Cabe is driving so fast some of the landmines are setting off as the sandstorm closes in on them before behind. Minutes later they cannot see. They come to a stop.

Toby tries to test the leader’s blood without sending it to the lab. He thinks he has polycythemia.

The team thinks they can use PVC to make some mine sweeps. Meanwhile, Toby wants to take some blood from the elder to alleviate the pressure on his heart. The elder’s physician refuses.

Happy and the team creates far-reaching pipes with spikes in the front of the trucks to set off the mines before they run them over. They get further but suddenly a powerful landmine sends them off their path. The truck rolls. It ends up on its side. Walter looks out his window to see dirt and a landmine near his head. Cabe and the others get out of their truck to try and help. Paige tells Walt she loves him and that no matter what he is hiding from her they can fix.

Happy gets out, but Walt is left behind. Minutes later he comes out of the collapsing sand. He jumps in the other truck. He tries to tell Paige the truth about the lecture, but she cuts him off. She is so proud that he picked up on the social cue that she didn’t want to go.

The generator runs out of fuel. Toby runs over to the elder. He snaps off the line to the elder. He begins to lose blood. Armed men come in to take Toby down. The elder comes to. Happy honks from outside the infirmary. They are there just in time for the fuel.

The team gets ready to go home. They say goodbye to Alex and the locals.

Back at home, Happy and Toby talk. After seeing Toby talk to a local girl who was adopted, she wants to adopt. Toby thinks it is the best idea he has ever heard. Meanwhile, Sly tries to get the nerve up to ask out Flo. Paige comes downstairs. She asks Walt why he has 2 tickets to the lecture in his book he bought there. He admits he went with Flo, who has just walked in. Paige is angry. He lied to her because he knew deep down he was wrong. She is done with him. Sly is angry too. Walt knew that he liked her. Flo admits to liking Walt. Paige and Sly quit. Happy and Toby follow.

Walt, Flo, and Cabe go to meet a client, presenting themselves as team Scorpion. Outside the room, Paige, Sly, Happy and Toby sit as a new team.