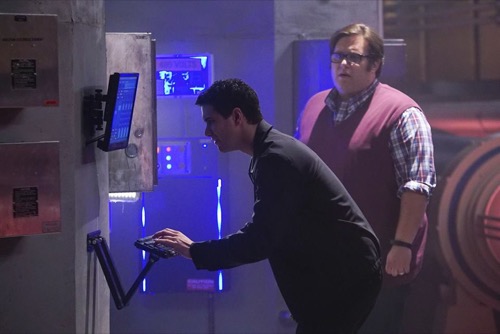 Tonight on CBS their hit drama/comedy Scorpion airs with an all-new Monday, February 26, 2018, season 4 episode 17 and we have your Scorpion recap below! On tonight’s Scorpion season 4 episode 15 “The geniuses of Team Scorpion turn into knuckleheads and Paige must simplify the science for them when their mental faculties are impaired during a job to prevent the creation of a black hole. Also, Florence and Sylvester grow closer when she helps him with a special project.”

Walter ran into some problems at game night with Paige’s friends on tonight’s all-new episode of “Scorpion” because the genius refused to dumb down his answers. He later told Paige that it would have cost him his integrity when really all it did was upset, Paige. She wondered why he couldn’t choose the easy way of looking at things and her anger followed them into work where she wasn’t the only one that was upset. Cabe had also gotten frustrated with geniuses because they had a case for weeks now and no one would explain it to him. He said that he could handle whatever they threw at him and demanded to know what their next job was before they boarded the plane to Colorado, but it seems the team really didn’t know how to break things down.

The guys had all explained how they were dealing with an underground lab and that this lab dealt with the astronomical though of course, they didn’t explain like that. They instead used a bunch of scientific words that meant the same thing and that had left the two members of the team weren’t geniuses confused. Neither Paige nor Cabe knew what Team Scorpion was going to be doing down in that mysterious lab and so they chose to sit out. The two of them decided to stay above ground while the others traveled to the lab and they had luckily been out of harm’s way when the trip to the lab backfired. The geniuses went down there to verify a theory and they had just done so when they risked staying in the lab longer than necessary.

They had apparently been warned that they couldn’t stay at the lab for too long or it could mess with their mental capacity however they had been so happy about proving the theory that they thought they could look around and as they did so they ran into some trouble. They noticed the top of a hydrogen gas tank had come off and that a prairie dog was responsible. The critter had somehow gotten in and had started wreaking havoc at the lab like chewing through the wiring as well as knocking off an important ant nozzle. So Walter tried to fix the wiring before they left and unfortunately his impaired mental capacity had worked against them. He thought he was fixing the wiring when really he set in motion the makings of a black hole.

The black hole could lead to a rift in the space and time continuum and so they had to fix it before they could leave, but they weren’t geniuses anymore. They were steps away from dying and had started to crack fart jokes about how the hydrogen tank could lead to a gas explosion. Never mind the fact that if something like that were to happen they would all die! The guys down below did eventually realize that and so there was still some reasoning with them just they hated being slower. They thought it was like Paige and Cabe and those two were actually still listening to everything so they were offended. Paige and Cabe had wanted their typical nerds back because the guys they got stuck with weren’t all that great under pressure.

The geniuses kept trying to do things like they normally would have and none of their plans were working because they were no longer smart enough to carry out any of their plans. Therefore, they messed things up, even more, the longer they were down there and so the team above ground did their best to help. They broke things down for the guys below and Paige ended up developing her own plan. She and the others had seen Toby pass out because the toxins in the lab were applying pressure to his brain and so she told the guys downstairs to use a vacuum. The vacuum would help suck out the toxins and she talked the team through the procedure on Toby until he finally returned to normal. He became a genius again and that made him a tad boastful once he realizes he was the smartest one on the team.

Toby couldn’t help milking that moment until he was reminded they could all die. They had tried to stop the hydrogen tank from exploding by letting in air and that had instead caused a massive explosion that ruined the elevator they had to use to escape the lab. That coupled with the fire meant there was only one way for them to exit. They had to use to be carried out by a rope when the team above ground cleared another tunnel for them and so in the meantime, the fate of the world rested on Toby. Toby had figured out the only way to stop the collider from exploding was cooling it down and so assigned everyone a task. Sly had to reroute the air, Toby had to manipulate the piping, and Walter was in charge of the pipe directly above the collider itself. That’s the pipe that had to do the most work and it’s the one that Walter mistakenly stayed on even as he cut through it.

That, unfortunately, meant Walter lost his balance when he was finally able to cut through the pipe and so his team was trying to figure out how to stop his fall before he burnt himself alive by falling on the collider itself. The three that were the closest to him had run to his side when they heard he was in trouble and with some careful maneuvering they managed to catch Walter before he could hurt himself so he was alright in the end though they all became the geniuses the moment they escaped that lab and well things had been easier when they weren’t as smart as normal. They realized they could turn to simpler methods and so that helped Sylvester with his idea of cutting down on plastics because he figured out how to turn tap water into great tasting fresh springs water. And Sly even brought Florence in on the project.

He sort of has a crush on her and sadly it seems she was more interested in Walter. Walter was sweet and understanding when he was trapped underground because he didn’t hide behind his IQ down there, but he was backing to being a smart jerk when he got back to the office and so he blew off Paige to continue working. He thought that his work was the most important thing and hadn’t cared that hurt his feelings or that he could easily give up on said work when he had the opportunity to talk to Florence about his side projects because he didn’t have to dumb himself down for her…