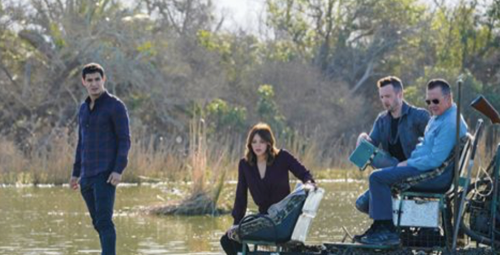 Tonight on CBS their hit drama/comedy Scorpion airs with an all-new Monday, March 19, 2018, season 4 episode 19 and we have your Scorpion recap below! On tonight’s Scorpion season 4 episode 19 “Team Scorpion heads to the bayou to track down a cagey alligator in order to stop a deadly mosquito-borne virus, and Paige teaches Walter the concept of the “white lie.” Also, Walter hits Cabe with a tranquilizer gun and Toby must save his life, and Sylvester and Ralph help Patty when the mean girls at her school force her to get a dreaded tardy slip.”

Sylvester had perfected his water filter on tonight’s all new episode of “Scorpion” and people were actually preferring it over bottled water.

They loved the water! They thought it was more refreshing and so Sylvester was sitting on a goldmine however he didn’t create the filter to make money. He created it to help stop the bottle water crisis and the amount of trash it build up. Sylvester was so concerned about the trash that he sort of hurt his own brand. He told anyone that got a filter that they should write to local officials and had even told them how they could it when in all honesty people weren’t going to do it. They were just going to believe that Sylvester was a nut and, on this, he was. The only thing that Sylvester thought about more was Florence. Florence was the girl that Sylvester had this huge crush on and for some reason he kept missing the window with her.

Sylvester had gotten Florence to help him with his water filter stand and so he stood right by her for hours. He could have taken that opportunity to ask her out or even tell her how he felt and yet he did nothing. Sylvester simply remained tongue-tied around her until eventually Florence left and he was beating himself up for that when he noticed something was up with Patty. Patty had come to help him with his stand in a bad mood and she hadn’t wanted to talk about it when Sylvester initially. She said everything was fine and hadn’t told him anything else until he had been forced to push. He kept asking and so she told him about the mean girls at school. The other girls had found out she asked a jock to the Sadie Hawkins dance and had gotten offended.

They said someone like Patty shouldn’t even think she had a chance with a jock and Patty had already found that out for herself. She had asked the guy to the dance and he had told her “no”. Patty that was humiliating and so she didn’t understand why the mean girls thought they should make things worse. They had apparently slashed the tires on her bike and that had made her late for school for the first time in her life. Patty was destroyed when those girls affected her permanent record and she hadn’t wanted to report the incident or tell her parents about. She planned on merely waiting the mean girls out until they moved on and Sylvester didn’t think that was going to work because he’s been in Patty’s position before.

Sylvester was bullied at school and no one had done anything about it, but Sylvester had wanted to change that for Patty and so he went down to the school. The school had tried to fob him off by saying he couldn’t prove those mean girls did anything and that had been the last straw for Sylvester. He remembered another principle that had ignored what he said and so he demanded to speak to Patty’s Guidance Counselor. He even told the principle that he wouldn’t leave her office until he spoke to the guidance counselor, so Sylvester was off fighting the goof fight for every child that had been bullied while his friends had gotten themselves in trouble out in the bayou.

Team Scorpion it seems had gotten involved in a mosquito crisis out in New Orleans. The city was dealing with mosquito that carry a virus and at the time the virus had already killed at least six out of the thirteen hundred that was affected. So Scorpion had come up with a solution for this crisis. They created helped a lab in the city create sterile male mosquitos and was going those to breed out the mosquitos in the bayou before anyone found out about the impending epidemic on their doorstep. The CDC had downplayed the crisis in the media because they hadn’t wanted people to create a mass exodus because their empty homes would become breeding grounds for the mosquitos and they would swarm whoever stayed behind in larger numbers than before.

The CDC had great reasons for wanting to keep the whole thing quiet and so Scorpion had said that there willing to help when they got there. They left Happy behind because she might be pregnant and the rest of them had gone to New Orleans where they picked up the sterile mosquitos. The mosquitos were being transported in a cannister and the team had picked them up before they took their airboat out on the bayou. It had been their job to take the mosquitos to a prime position and they had been doing just fine when suddenly Toby’s Mardi Gras beads had gotten suck in by the airboat. He had been the one driving thing and so he took the boat on a wild ride before he could stop choking. And by then, the cannister had fallen into the water.

The guys had turned the boat around to get the cannister and unfortunately an alligator had swallowed it whole just when they were within reaching distance, so then the team had to track the alligator. The alligator was luckily being tracked by the Nature Preserve and so they found out where Yvonne had had her own breeding ground. Yet, they raced there and again they ran into problems. They had tried to use a tranquilizer on the creature and Walt ended up shooting Gabe, so Toby took Gabe to get help while Walt worked with Paige to get the mosquitos back. It hadn’t been easy and Paige had landed in the water with an alligator moving behind her only Walt through some rope to her and had basically dragged her out of there on the airboat until finally they could release the mosquitos.

Therefore, their whole trip had been one mistake after another and the only reason they succeeded was because they worked through every mistake in a timely fashion as well as worked together. The team managed to survive their ordeal in New Orleans and they returned home with a new mindset. Toby had thought he was going to party in New Orleans and he realized afterwards that he was going to be a father soon. It was time to put certain things behind him and focus on the family he was about to have. And Walt learned he shouldn’t push a lecture on his girlfriend after she had been dragged through a swamp. He told Paige that the lecture had been cancelled and so she went home with Ralph who was in trouble.

Ralph had piled up the mean girls’ bikes and so he had gotten revenge for Patty. Patty though had just been happy that Sylvester got her principle to remove her lateness from her permanent record and so she hadn’t cared who had gotten back at the mean girls. They were mean and probably had a bunch of people out there that hated. At least that’s what Sylvester told her and another thing he told Patty was that she did have friends. She had everyone at Scorpion and they were going to have her back no matter what. And so Sylvester managed to handle things with diplomacy while Ralph had gone another way.

The boy was still in trouble with his mother however and that meant he wasn’t getting away with anything. So Paige went home with her son believing Walt was also going home when instead he had gone to that lecture (that hadn’t been cancelled) with Florence. Florence and Walt were secret friends…