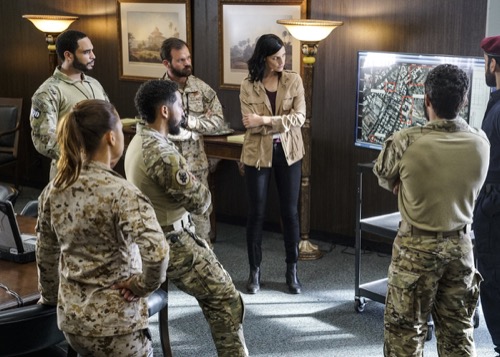 Tonight on CBS their new military drama Seal Team airs with an all-new Wednesday, October 10, 2018, episode and we have your Seal Team recap below.  On tonight’s Seal Team season 2 episode 2, “Never Say Die” as per the CBS synopsis, “The team travels to Saudi Arabia, where extremists take hold of an underground water source and threaten to release anthrax into the water supply. Also, Ray contemplates joining another team.”

Three men in hazard suits make their way into a foreign facility and shoot the place up until they get to a freezer where they take some canisters of a biohazard substance.

Alana has a meeting so Jason agrees to take their irritated daughter on a college tour. Meanwhile, the seal team gets in a morning workout. Sonny tells Ray he was working on Jason to try and get him back on the team.

Davis runs into Mandy. They talk about the guys and how Jason is doing better. Stella talks to her mom who says she and her husband are coming to meet Clay. Stella isn’t ready but Clay tells her he is going to meet them at some point.

On the tour, Jason promises his daughter he will crack some skulls if he catches her at frat parties.

Mandy meets a man in Mexico at a bar. His name is Fausto and she wants to know what he knows about a missing DEA agent. He threatens her. Within seconds she has her backup take him out the front door with guns drawn.

The team meets up. They are headed to Saudi Arabia. Some hostiles plan to release anthrax into the waters unless their demands are met.

Out in a field, Mandy discovers her agent buried. Fausto watches in the custody of two men. Ray watches the seals leave on a mission. Adam sees him. He tells him he isn’t upset, life is good. Adam tells him he used to lie to himself too. He admits he is lying to himself.

The seals discuss their game plan. After, Clay tells Jason he plans to meet Stella’s parents. Jason tells him it will be fine. He just needs to be himself. Sonny asks Davis why she was running so early in the morning. She asks him why he is creeping on her workouts.

Ray talks to a higher up about moving to another seal team. Jason and the team land and meet with the Saudi military who plan to take out the terrorists, they won’t make any deals.

The teams get together and head to the area where they plan to take out the terrorists. They have 55 minutes before the terrorists dump the anthrax. They drop down into the tunnel system. They pass another point. The dog detects a trip wire. They move forward a bit and are met with shots fired. Rocks and debris fall into the tunnel. They are down one Saudi team member. The Saudi general is angry. He wants to end the mission and vaporize the tunnel if they miss the next comms window. The seal team only has minutes to get out.

In the tunnel, one of the terrorists tries to run with the anthrax. The dog takes him out. They head back to help their counterparts. The Saudi team members who went down are still alive. Clay can see their glow lights. They want to keep digging. The Saudi general doesn’t care. Mandy argues for their lives. Desperate, she has Davis fake a communication from Bravo. She tells the general and others that the team has made it through another comm window.

Blackburn radios to the team that they have a minute left. They keep working and hit the jackpot. On the way home, Jason gets a call. He doesn’t look happy. On the ground and back at home, Jason sees Ray. He is upset. He heard Ray was window shopping. They face off for a few seconds. Ray walks away.

Jason is at home. He is irritable; there is nothing in the fridge. Alana knows something is up. She tries to talk to him but he doesn’t want to deal right now. She offers to go get him chicken, beer and wine.

Stella’s parents aren’t too keen when they meet Clay. They don’t approve of his work or the fact that he could come home in a box. Those words make Stella think.

Jason gets a knock at the door. It is the police. Alana was in an accident and is being transported to the hospital.