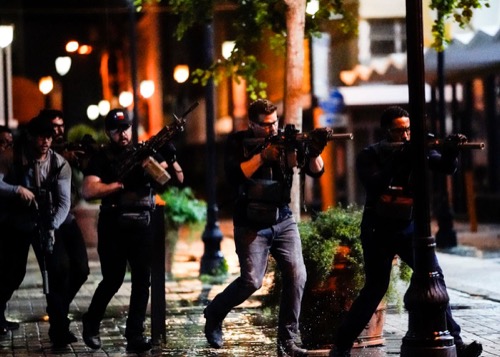 Tonight on CBS their new military drama Seal Team airs with an all-new Wednesday, December 5, 2018, episode and we have your Seal Team recap below. On tonight’s Seal Team season 2 episode 9, “Santa Muerte” as per the CBS synopsis, “Following an ambush, the SEAL team suspects someone on the inside is leaking information to the cartel.”

Bravo is in the middle of the dark street under fire after Jason tracked one of Doza’s men to a club, Lazo. They head off the street and into a building. They have Lazo. Sonny looks to have been grazed by a bullet. Ray sees a church on the distance where they can take cover.

Seconds later they are inside. They make sure it is clear and then radio to Blackburn. Ray thinks Lazo and his men knew they were coming.

They strategize what to do next in the church. Blackburn is sending more men to help them. They deploy. Meanwhile, Mandy and her intel partner find Carla dead. They too think there is a leak.

They work on Lazo who is bleeding. They try to get intel but he isn’t talking. He lay in bad shape on the table. He needs blood and Jason wants to give him their blood. Martinez thinks its a good idea. He cannot talk dead. Sonny thinks it is a bad idea but Jason gives the green light. Jason tells them to get the priest in the back, fire is coming. Sonny tells Clay on the side that he doesn’t trust Martinez. Across the city, Mandy is thinking the same thing.

All the guys tell Jason they don’t trust Martinez. Jason thinks they need to confront him. They do and Martinez says he might have been one of his men or maybe himself. Jason takes his weapon and realizes he is bleeding. The others radio that the enemy is at the door.

Two men come in the door. The team takes them out with eyes on the outside. Another man comes in. Martinez fires at him and then drops. Ray wonders if he is truly the leak. They drag him out of the way and put him on a table. He asks for his last rites. The priest comes out. Lazo watches as they all gather around. He warns them more are coming. Martinez dies. Clay steps up and asks Jason about his decisions – are they personal? Jason tells him no, his mission is about getting Doza and he better not doubt that. They retake their positions.

Lazo asks for his last rites. Jason tells him no unless he wants to tell them where Doza is. He tells Jason to go to hell. Davis radios 20 combatants are on the way. Jason tells them to bring Lazo upstairs. He cries as they carry him. The priest is brought up too. They zip tie him to the chair. They take aim out of the windows. Ray tries to get Doza to talk one more time.

Mandy realizes Rita her Mexico intel partner is the leak after all. She pulls a gun on Mandy.

Shots come through the church. Glass shatters, bullets fly. Ray fires while trying to get Lazo to change his mind. He agrees to confess. He tells them about a safe house and then dies before he can get his last rites. Ray radios the intel to Davis and heads down the stairs.

Rita tells Mandy why she did, all the threats to her sister, her nieces. She gets up to leave. Mandy tells her she is coming for her.

At the church, the gunfire stops. Some are heard outside and then it is silent. It is Blackburn and the others. Lopez sees Martinez on the floor. Jason tells them they are steps away from getting Doza. They carry their men out.