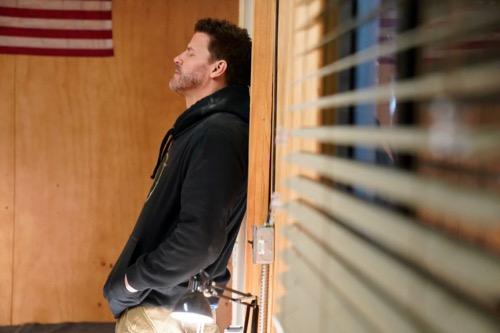 Tonight on CBS their new military drama Seal Team airs with an all-new Wednesday, March 28, 2018, episode and we have your Seal Team recap below.  On tonight’s Seal Team season 1 episode 17, “In Name Only” as per the CBS synopsis, “As Jason and the SEAL Team come closer to avenging the loss of Echo Team, Mandy takes matters into her own hands after her boss won’t green-light her mission to take out their biggest target. Also, Jason is unsure of where he and Amy stand.”

Amanda watches as Navy officials recognize a corrupt leader after the capture of an international drug trafficker. Meanwhile, Jason hangs out with Amy while Sonny and the guys play horseshoes.

The team meets up. Amanda informs them that she has a new lead on who may have been behind the bombing of the Echo Team, a man by the name of Salim. They need to talk to his wife to see what she will tell them.

They get ready and head out into the field. The team closes in on a tiny home. They find the father in law of Salim who tells them that the evil man took his daughter away. The team reconvenes with Amanda and goes over a game plan of how they plan to break into a compound where they think they can find Salim’s wife.

Jason is playing hockey outside. Ray comes to see him. He noticed he didn’t come home last night. Did he stay with Amy? Jason asks him if he has a problem with that. Ray thinks it is good for him. Ray thinks the Echo bombing has him a bit hot-headed. He hopes he doesn’t do anything crazy. Jason gets a call. Mandy tells them that they are being forced to work with some Afghan soldiers. They will take down the main targets while the Seals can take down the secondary target.

They meet with the Afghan soldiers. The lead soldier Nabi tells Jason that they have a new guy. One of their regular guys is out. The Seals meet privately on the side. Sonny thinks the new guy could be one of Salim’s guys. Nabi interrupts. He understands that they don’t know him but he has wanted to get into this compound for a long time and free those that are being enslaved.

Jason and the guys move in on their target in the darkness. Clay gets chummy with one of the other soldiers he knows from a previous tour. Jason redirects him, telling him he wants him to keep a close eye out. The snipers take out 3 guards. The guys move in on foot.

They surround the men’s quarters. They break in and get everyone down. The other soldiers enter the servant’s quarters. They don’t see Salim’s wife. They head to the other building. It is full of young women and children. Meanwhile, Clay and the others take down some of the men in charge in the other building. They shoot one man who Clay identifies as the one in charge of the compound, a human trafficker.

Amanda sits with Salim’s wife. She asks about her husband. Amanda tells her they will protect her. They plan to put Salim in an American jail. She will be safe.

Jason meets with a journalist as a favor to Amanda. Jason is only willing to talk about his job not politics, poppy fields and more.

Jason meets with Amanda. The wife of Salim gave her some dirt and names but they need to dig deeper. Jason has an idea.

Amanda meets with a general who is dirty. She gets him talking, telling him his wife has told her plenty. He threatens Amanda. Jason and the others come out of nowhere to show him they know who he really is and heard his threats.