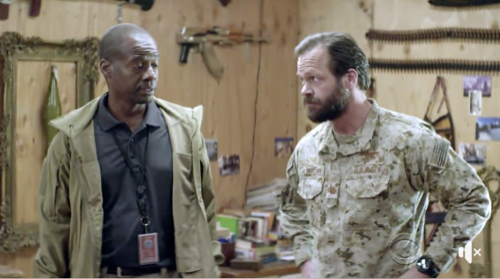 Tonight on CBS their new military drama Seal Team airs with an all-new Wednesday, April 25, 2018, episode and we have your Seal Team recap below.  On tonight’s Seal Team season 1 episode 19, “Takedown” as per the CBS synopsis, “The SEAL Team sends Ray undercover in a busy spice market to make a high-stakes money swap, and Jason attempts to take down a terrorist known to wear a suicide belt. Also, Ray realizes the devastating consequences of his decisions.”

The conspiracy surrounding what happened to the ECHO Team wasn’t finished with one man’s death on tonight’s all-new episode of “SEAL Team”.

The Americans were still looking for who was responsible. They had believed it was Salim Hakan that gave the orders that killed several Americans and had found out they were wrong when someone else ordered Hakan’s death. The sniper that killed Hakan had been a skilled assassin from Syria and he had a long resume of high-profile kills, so he had been the perfect man to send after Hakan though the man’s employer had been a little much faith in Abu Ali. He was found not far from his target and was killed on site. The team had taken out Abu Ali and later learned that they had needed the man alive to find out who employed. Whoever did so had thought Ali was still alive following the assassination and so they reached out to Ali.

Only with Ali dead, it had been Ellis that found the text message and she was the one that chose to respond. She’s been in contact with this mysterious employer and she had done everything possible to maintain her cover. She had everyone believe Abu Ali was still alive when she sent out several teams of SEALs to fake a raid. They would pretend they got fresh intel on Abu Ali and make a big fuss. They would knock on doors, ask people loitering around, and they even pretended to arrest several locals that were in fact allies. The team did all of this to ensure everyone believed Ali was alive and the plan worked. Ellis continued to hear from this mysterious another person behind the text messages and she pushed this person for the payment Ali was expecting.

Ellis pretended Ali never got his money. She would say something went wrong with the transfer and kept pushing until she was told that her money would be delivered through a much safe channel. Now, she knew that the employer wasn’t going to risk their own necks to pay off an assassin in person and so Ellis planned on following whoever it was that the boss did send. Ellis had talked to journalists to craft a story about how Abu Ali was still in the area and then she had talked to the team afterward because she wanted to brief them on what they were going to be doing next, but the team had gotten news that had disheartened everyone. They had found out a noncombatant had died because of them.

The victim had been a little boy and he had been standing next to his window when an explosion occurred that managed to kill him instantly. Unfortunately, the explosion had been caused by Ray when he tried to smoke the Abu Ali out while they were looking for him (as in actually looking for him, not one of their fake raids). Ray had known that he hadn’t thrown the explosive far enough and he knew the reason why he wasn’t able to do so was that he wasn’t truly fit for combat. Ray had gotten injured months before the incident and he hadn’t gone to see a doctor see if he was okay except he had pretended like he was back to his old self with his team. And so that’s what happened right before the accident.

Ray suspected it was entirely his fault when he accidentally killed someone and he had owned up to it with Sgt. Jacobs. Jacobs was investigating what happened. It was his job to figure out whether or not one of their own had made a mistake that could have easily been corrected before it caused unforetold casualties, so Ray knew the answer to that and what happened was eating him up. He blamed himself for the child’s death and his guilt was making him forget important things. Ray had forgotten his comms before he headed out to the money drop and he had been jumpy throughout the entire mission. He was supposed to sit up front where he could keep a close watch on the money drop and had needed to be pushed the whole way through grabbing someone off the street.

The team got their hands on the man delivering the money and it turns out it had been the lowest hanging fruit. The guy they picked up hadn’t been a true believer because he smokes and he also had no idea who hired him however someone else had been watching the drop and so that told the team back at base all they needed to know. They had seen the footage from the drop and they recognized the man watching it all had been Hamid Gul Baladur. Baladur worked exclusively for the Halani network/ family and if he was watching the money drop then it had to be because his people had hired the assassin. The team hadn’t lost their cover and so everyone still believed Abu Ali was alive by then, only reaching out to this Baladur was opening themselves up to risks.

They could reach out again as Ali and demand a face to face meeting, but to get that meeting they would have to taunt Baladur by telling him that they knew he hired them. So when Baladur did get back to them after they stated that they knew who he was, he agreed to meet with Abu Ali and no one else. He would have backed out of the meeting if the team tried to send in an intermediary and so they chose to send in Ray. Ray was still pretty messed up and, despite that, he had been asked to go back out in the field pretending to be Abu Ali. He had to pretend to be the assassin in order to get the money and having Baladur tied directly to the money drop would allow the Americans to arrest him. Baladur was privy to a lot of information and he would be a great asset if they could flip them.

Therefore, the plan for that particular mission had been simply. Ray had to go into a meeting place and look like badass assassin. Ray on his part had tried to do that and unfortunately, Baladur made him out to be a fake within seconds. He had snuck into the meeting place using tunnels and had taken one look at Ray just to know he was fake, so he had ordered his men to kill Ray onsite and a simple meeting quickly turned into a free for all. Ray had taken cover in time to protect himself until the rest of his team had moved in and they were ones that took control of the situation. They killed off Baladur’s men and had also managed to capture Baladur alive despite his suicide belt. And so they did great a job.

People back at the base hadn’t liked the risks the team took and they had trampled some of their relationships with the journalists at the best yet they had gotten the job done and Jason had even stumbled across something else. He found out that the soil below the poppy fields that had been burnt to the ground had shown large amounts on lanthanum in the soil. And that was quite a rare find because lanthanum was practically in everything nowadays, so someone could become rich just by drilling into the same field that had been recently cleared.

Jason suspected this lanthanum could have led to the death of his brothers in ECHO Team and he also had several theories he wished to share with Ellis though she also had something to share.

Abad Halani had reached out to Ellis to tell her that it was his brother Nouri Halani that ordered the death of Salim Hakan and the American SEAL Team.

It seems Abad was willing to turn on his brother as long as he was left alone!