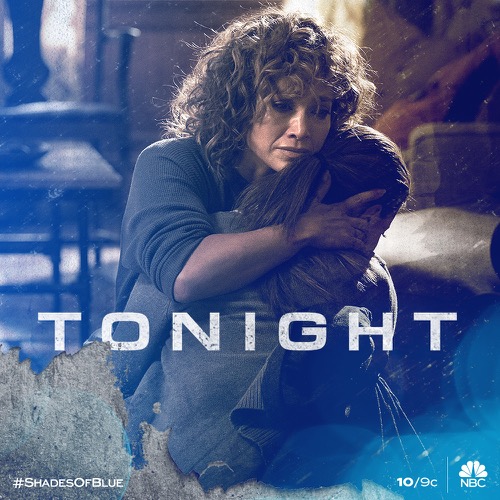 Shades of Blue airs on NBC tonight with an all new Sunday, June 24, season 3 episode 2 called, “The Hollow Crown,” and we have your weekly Shades Of Blue recap below. On tonight’s Shades of Blue season 2 episode 13 as per the ABC synopsis, “Dealing with a loss, Harlee pursues evidence of a higher level of corruption within the NYPD. Wozniak tries to protect Harlee and his crew from escalating threats.”

Woz arrives at the scene to see Harlee crying and angry. He tells her that he will find whoever did this. She blames herself. Woz and the gang tell her they won’t let he stand alone. She walks home alone crying. She tells Cristina that Nava id dead.

Woz tracks down the guy who left prints all over Nava’s car. They track him down but discover him hanging in his bathtub. They don’t think he killed himself but Woz tells them they aren’t going to tell Harlee that.

Harlee arrives at the FBI to see Gail Baker. She tells her she saw Stahl. He is back. They don’t believe her. They think he is in Mexico.

Nazario and Tufo pick up a purp. Meanwhile, Harlee arrives at the precinct. She is mad they didn’t call her when they found Nava’s killer. She looks at the file and tells them she isn’t buying it.

Woz meets the Captain and warns him he needs to control his crew. He also wants Quince.

Harlee tries to go see the body of Nava’s killer but she is too late. He is being prepped for an autopsy. She asks to see Nava. Inside, she cries before going through his belongings. She turns on his phone and it sends her a text, a code. She thinks it is a case number file. She heads to his apartment and tries the safe. It doesn’t work.

Harlee meets up with Woz. She shows him Nava’s phone. She is angry he has given up looking. She knows Ramsay is behind it. Harlee leaves and sees the officer from the other night, Cole. He wants to help her. She puts a gun to him and demands to know who was behind Nava’s death. He confirms that Ramsay was behind it. He was smuggling something and Nava got in the way.

Woz goes to the Captain and demands Tufo and Nazario be put back on his beat. He denies Woz.

Tufo goes to visit his brother and asks him to reach out to his old connections in order to help him find some fencers.

In the library, Christina punches a girl who makes fun of her mother.

Woz is in the middle of trying to find the fencer with Nazario and Tufo when he gets a call that Harlee is with Loman headed to the docks.

Harlee gets a call to go to Cristina’s school. She picks her up and tells her she needs to ignore what other people are saying.

Harlee and Loman arrive at the docks. They arrive at the shipping container with the same numbers Nava sent her. They open it and find nothing. Harlee flips out. Loman restrains her while she cries.

Harlee meets with Cole. He tells her it must have been empty because Woz made a deal. Harlee cannot believe it. He opens the back seat to show her Quince. His boss tells him what to do and he has to follow just like she has to. He shoots Quince and tells her she needs to finish the delivery.

Harlee comes home to see Cristina. They talk. Cristina tells her she is getting older so she can tell her things.

Down at the park, Naz and Woz take care of the fencing problem.