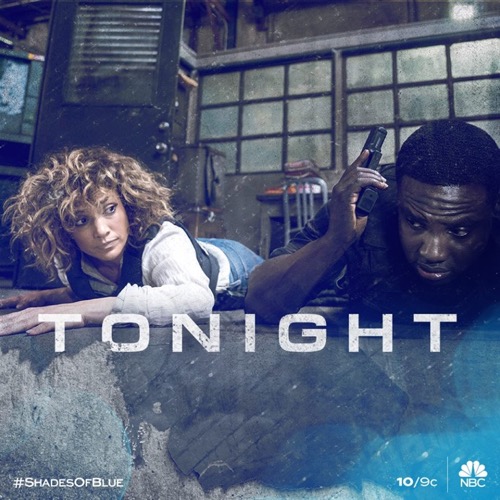 Shades of Blue airs on NBC tonight with an all-new Sunday, July 22, season 3 episode 6 called, “The Reckoning,” and we have your weekly Shades Of Blue recap below. On tonight’s Shades of Blue season 3 episode 6 as per the ABC synopsis, “Harlee and Wozniak try to link the intelligence unit to the cartel while facing the consequences of breaking the blue wall.”

Verco gets Woz and Harlee 24 hours to find the evidence they need to convict Bennett for Nava’s murder.

Tufo and Nazario report for roll call and an update for the day. There is a string of robberies in Bedford. They are both mad they are back in blue because of Harlee.

Woz and Harlee attempt to integrate Bennett but he isn’t talking.

Loman’s brother gets a transfer. In the middle of his transport, a car pulls in. Tufo reacts quick drawing his gun on the man who is trying to get out of his car. Loman pushes his gun when he realizes the man is reaching for a cell phone and not a gun. He is deaf.

Ramsay calls Woz. He thought they had an agreement. Now that he knows they don’t he is going to make Woz famous. Ramsay holds a press conference calling the NYPD corrupt for holding Bennett as they paint Bennett as a hero against terrorism.

Harlee tracks down Cole. She wants to know where Nava’s notebook is. She needs his help. She needs evidence against Bennett.

Woz gets information on who Ortiz’s lawyer is. Meanwhile, Verco tells Harlee she should be keeping her head down. While they talk she finds a newspaper clipping on her desk of the murder of a man on her block. In the back in red pen is written, it was you or him.

Harlee goes to see the lead investigators in the Stahl case. They tell her Gina has retracted her statement.

Woz and Carlos go to see the lawyer who knows all about Ramsay and Ortiz. They try to get him to talk but he refuses. He sits on the window ledge and falls back to his death.

Harlee goes to Gina’s. She isn’t answering. She is inside, bound and gagged. Stahl stares through the peephole.

Tufo and Tess ate outside the precinct when another officer makes a crack about Tufo using his brother for a paycheck. Tufo roughs him up.

Ramsay comes to see Woz who is having a drink at the bar. Woz wants to make a deal. He wants Bennett and they can drop their beef. Ramsay doesn’t want to do that.

Harlee meets with Cole. They have a couple of minutes to get into the lawyer’s office. They head out of the parking garage. Stahl arrives and plants a bloody knife in the car.

Inside, Harlee and Cole find papers that are linked to Ramsay. It is a purchase agreement. Someone is coming. They hide in the closet. Ramsay’s guys come in and find the paperwork. They leave with it while talking about an operation they have tonight.

Woz goes home and has a drink. He recalls a fight he had with his daughter. He sees her in the kitchen. She grabs a bottle of Jack and sits and has a drink. Harlee comes in. She has a lead on Ramsay. They need to go.

At the docks it is quiet. Something isn’t right. Out of nowhere, shots are fired. Harlee calls for back-up. Tess is called to the scene with several other officers who then turn around. Tess puts a gun to Stone’s head so she can go back.