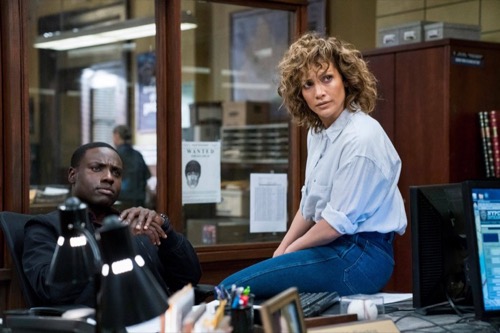 Shades of Blue airs on NBC tonight with an all new Sunday, July 8, season 3 episode 4 called, “A Walking Shadow,” and we have your weekly Shades Of Blue recap below. On tonight’s Shades of Blue season 2 episode 13 as per the ABC synopsis, “Harlee focuses her sights on taking down the intelligence unit. Stahl’s continued obsession brings him closer to New York. Wozniak uses Wallace as Espada struggles with keeping secrets from Tufo.”

Harlee comes out on the stoop of her house. She sees Stahl across the street in the shadows. She goes to take a closer look and ends up almost being hit by a car.

Stahl comes to inside a house bloody. He walks to the door and finds Harlee out on the lawn bleeding from the wrists. He calls 911. He heads back to his house and grabs some passports hidden outside under a paver. He goes to see Harlee a little later in the hospital.

Time has passed, Stahl is on the run. He hides out, stalking Harlee, watching her via video and prank calling her.

Harlee runs into an alley. She is tailing Stahl but doesn’t really know it. He hides. She stops and turns around wondering if she is imagining things.

Stahl heads to a bar and has a drink. Cole sits down a few seats away. They make eye contact.

Woz comes to in an alley, bloody and beat up. He sees his daughter. She is asking him what he did to himself. Harlee continues to stare at him, saying his name. He comes to. She helps him out of there.

Cole is out for a run. He stops in at a newspaper stand. He heads in. Stahl is in there. Stahl threatens him, telling him to now is not the time to make new friends.

Cole shows up at Harlee’s. He tells her about the man at the newspaper stand. She tells him she hasn’t been talking to the IAB. He’s crazy. He tells her to forget about him and think before she talks to anyone.

Loman is looking at the dead body of a convenient store owner. Tess and Tufo are there. Woz comes in. He is angry that Loman didn’t do his homework and he was too busy courting carrot top. Woz leaves angry, he heads out to stop WW3, he tells them.

Harlee talks to someone she knows in IA. She suggest he may have a leak in his department.

Harlee meets up with Loman. She shows him the picture of a gun that is in evidence from the Sunrise café. Loman insists that wasn’t the gun he planted. He tells Harlee that Woz has him staking out intelligence.

Woz meets with the Captain. He shows him a draft of Nate’s reporting story. Woz asks him if he got that with a warrant. The Captain threatens Nate. Woz gets angry and promises to redecorate the wall with him if he touches his son. The Captain just wants to make sure they are all on the right page.

Stahl is hiding in the apartment of Gina. She sees him. He tells her he was hoping they could celebrate. Have a reunion. He offers her some brandy. He tells her he knows she has been spending time with Harlee. He wants to know what she has told her. He tells her that Harlee uses people and then throws them away. She is a psychopath. He wants to get into her head with the help of Gina. Then they can use it against her and both be free.

Woz tells Tufo and Tess to go meet with the captain. He is getting them out of their blues. Woz calls Loman and tells him to stop his stake out.

Woz visits Nate and tells him the store owner is dead and to stay away from the case or he will get hurt.

Loman and Harlee arrive at a domestic dispute. The female victim tells them it is a misunderstanding. Harlee tries to tell her she can help but the woman refuses to give them any info. Cole and his  partners are there. Harlee wants to know why they are working this kind of case. They tell her to move along, releasing the man who assaulted the woman.

Harlee wants to go back. Meanwhile, Tufo gets word Woz is with his brother. He heads to find him. He tracks them down and yells at Woz who is trying to give Tufo’s brother a gun for protection.

Loman and Harlee scope out the man and his girlfriend getting in the car. He is rough with her. They follow them and pull them over. The man offers them money. Loman demands they both step out of the car.

Tufo and his brother talk alone. Wallace thinks helping the cops feels right. Tufo thinks this is a bad idea. Wallace feels like he has a purpose.

Stahl has Gina call in to IA and make Harlee sound crazy. She tells them that Harlee is dangerous and she tried to kill Stahl.

Harlee meets with Cole. He warns her that she is going to get Ramsay after her if she keeps pushing.

Woz meets with a priest he knows. He talks about Nate and how he needs to do something unforgivable. Woz tells him to close his eyes and describe heaven. When he does, Woz puts a gun to his head and tells him to stop assisting Molina.

Woz and Tufo send Wallace in wired to meet with a gang. Back at the precinct, Harlee finds put what they are up to. She was told by Cole that this would be an ambush. She heads there as fast as she can.