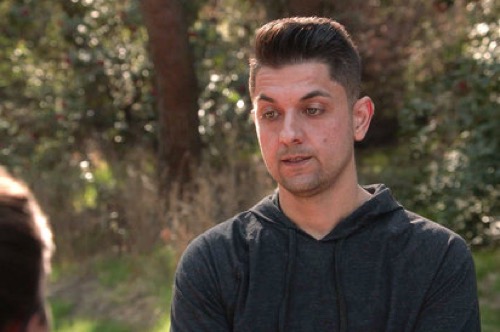 Tonight on Bravo, Shahs of Sunset continues with an all-new Thursday, August 16, season 7 episode 3 called “A Date With Destiney,” and we have your weekly Shahs of Sunset recap below. On tonight’s Shahs of Sunset Season 7 episode 3 as per the Bravo synopsis, “MJ rides an emotional roller coaster as she deals with the fallout from the Valentine’s Day party, as well as her dad’s declining health. Nema comes clean to his live-in girlfriend about his flirtation with GG and faces the consequences.”

The show opens with MJ joining Reza at his new house. He is so ready to move in and become a suburban family. They talk about how drunk they were at MJ’s party and about some of their bad behavior. Specifically calling out that Shalom’ s ex-wife was at the party thus humiliating GG. The next scene is of GG getting her “Shalom” tattoo removed. She will need to have 7-9 treatments. Destiney joins her and tries to help her manage the pain but she screams A LOT.
Nema and Mona have dinner together and are again asked if they are a couple. They can’t believe that the waiter thinks this of them. They talk about GG and Nema says he has tried to talk to Erica about her but he failed. Mona is uncomfortable with the whole situation and what Nema is doing.

Mike and Reza walk their dogs and talk about how Reza met a wealthy woman who sells hair products. Reza says the best way to make money is to befriend rich people. Reza is feeling lots of pressure cuz Adam wants a baby now which is going to cost a lot of money. He hasn’t told Adam about the meeting and Mike thinks it is a bad idea to keep secrets from Adam.

MJ meets with her wedding planner Leora and they have a lot left to do with just a month left. They finalize the flowers, music, and cake. Since they don’t have a lot of time MJ is very decisive. Nema and Erica walk their dog and Nema confesses that he almost kissed GG. Erica asks how do you almost kissed someone? Who stopped it? Nema lies that they both did. A clip is shown of GG stopping the kiss. Erica asks if he wants to be in a relationship with her. She says her next step is engagement and marriage. Nema doesn’t want to waste any more of her time. She thinks they need to take a break.

MJ is with her father at the hospital and he doesn’t look good. She wants to emulate him and wants a friend who lifts her up. She doesn’t have time for petty BS. Destiney calls her mom, Titi and tells her she is going on a date. Destiney met Alex at MJ’s party and they are going to meet for dinner. Titi talks about remembering her first date with Destiney’s father. He left when she was young and it negatively affected Destiney and her two sisters.

Destiney arrives at the restaurant and meets Alex. She tells the camera she needs a man who is much more Alpha then she is. They share stories about the father and have similar experiences. There is a connection. Shervin and GG go out for drinks. GG shares that MJ has been texting her and she is so over it. She wants an apology from MJ. Shervin thinks she needs to rise above it. Mike, Nema, and Mona join them. Soon several other Iranians join them. Nema tells the group he and Erica broke up. Mike thinks it is a good thing.

Reza works on his house and Adams joins him. Reza is thinking about investing $500,000 with the hair product lady but still doesn’t tell Adam. Nema packs his clothes as he moves out of the home he shared with Erica. Mike calls and offers support which Nema appreciates. Mike then meets up with Morgan Nema, Destiney, Shervin, and Reza. They gather socks and blankets and give to the homeless.

GG and MJ meet at a meditation garden to talk. MJ says she ads Reza where happy when they announced he was going to be her man-of-honor and GG ruined it. GG hurt MJ with her works. GG says she can be ugly but MJ is downright nasty. When MJ announced that Shalom’s ex-wife was at the party GG was very hurt. MJ starts to talk about Shalom and GG goes off. She yells at MJ to stop bringing up her husband and starts to leave. MJ then tells her to take off his ring and GG turns around and gets in MJ’s face. She tells her she is going to sh** on her and starts throwing pieces of a plant at MJ. GG acts like she wants to fight but MJ won’t take the bait. They agree that they have hurt each other. They makeup and joke about GG’s sideburns.