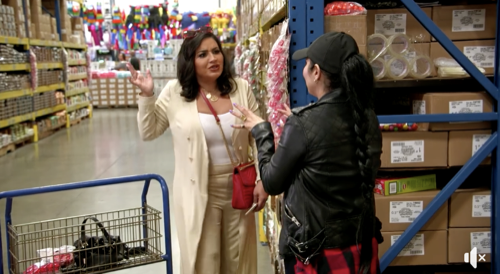 Tonight on Bravo, Shahs of Sunset continues with an all-new Thursday, August 9, season 7 episode 2 called “It’s My Party and I’ll Make You Cry If I Want To,” and we have your weekly Shahs of Sunset recap below. On tonight’s Shahs of Sunset Season 7 episode 2 as per the Bravo synopsis, “At the end of a fun-filled vacation, Reza and MJ make an exciting announcement that incites an argument amongst the group. Back in L.A., new homeowner Mike has a reluctant but hardworking project manager in Reza, who is slowly becoming irritated with Mike’s reliance on him.”

The show opens with the group waking up at the Big Bear cabin. Nema tells Mona that he is crushing hard on GG but he has a girlfriend and is really F***ed. MJ tells the camera that the whole trip has been a lovefest of friends and she wants to keep the good feelings going. Everyone starts to pack to be ready to leave. Right before they walk out the door Reza shares with the group she will be MJ’s man-of-honor at the wedding. GG asks how Tommy feels about having a man-of-honor who had his dick inside the bride. Everyone is shocked and MJ confronts GG. She thinks GG is “bottom dwelling” in this happy moment. Instead of being happy for MJ she is nasty. Reza comments that GG knows exactly what she is doing and is trying to get to MJ. MJ has no time for the negative bulls***.

Back in LA MJ runs with her trainer and wants to look good on her wedding day. MJ is thrilled with her new house and thinks of it as her dream come true. Tommy talks to Vida about the wedding and MJ is so happy that they are getting along so well. She thinks they would make the perfect couple if they were closer in age.

Destiney meets MJ at the store to buy things for MJ’s Valentine’s Day party. MJ pushes Destiney to show her what she has done on her Tinder profile. MJ adds several things and takes out some of the pictures Destiney chose.

Mike wakes up and takes his dogs out and shows off his new home. Reza is project managing the remodel of the new home and has put in 100’s of hours on the project. He finds several flaws in the construction and is not happy. He wants things to be done right because it is a reflection of him.

Destiney and GG go out and talk sh** about MJ. GG thinks MJ was nasty to her so her comment about Reza at the cabin was well deserved. Destiney says it was bad timing. Her Tinder experience has not been good. Everyone just wants sex.

Reza meets Mike and Nema for dinner. Nema is happy they are doing a guy’s night because then he can’t get into any trouble. He hasn’t told his girlfriend about GG but knows he has too. He is too big of a wimp to lie. He knows she will find out because they live together and she is Mona’s best friend. Nema also thinks everyone in the group are sociopaths and he can’t trust any of them. Mona joins GG and Destiney at dinner. Mona has camel-toe so GG gives a lesson on how to get rid of camel-toe.

Shervin joins the guys at dinner and tells Nema he needs to be honest with his girlfriend. Shervin calls the girls and they all laugh when GG answers and they can see her cleavage. Reva tells GG that Nema is going to tell his girlfriend about her. She doesn’t know what to think. Reva, Mike, and Shervin leave Nema at the table and tell him they will be right back. They walk out of the restaurant leaving him with the dinner bill.

MJ and her mother meet with MJ’s doctor to talk about her fertility. The doctor is very happy with the quality of the embryos MJ has had frozen. Vida asks the doctor if there is any rush to get pregnant but he says there is no time push. Vida wants MJ to wait.

Mike and Reza meet at the plant store to get succulents for Mike’s yard. Mike tells Reza he is very interested in trying to fix his relationship with Morgan. Reza is worried she is too young and he knows he is trying to please his mom. Mike is just attracted to ho’s. Reza tells the camera that they are in classic textbook Persian mode. They go to a high-end expensive store to look around and then go to a wholesaler to make their actual purchases.

Everyone starts arriving to MJ’s party as Destiney runs around getting everything ready. Vida complements MJ’s dress and she doesn’t know what to think since that is so not like her. Adam comments that Mona and Nema seem more like husband and wife than brother and sister. Reza is not surprised that Mike brought Morgan to party after just being with Mona in Big Bear. He knows Mike needs a lot of coddling and Mona is just not that kind of girl.

GG is worried that Nema’s girlfriend is going to call her up and accuse her of trying to steal her boyfriend. MJ announces that she will be getting married on April 21st and that Reza will be her man-of-honor. She then introduces her trainer and his boyfriend as her bridesmen. The rest of the group is not happy. GG tells the camera that MJ has picked a bridal party that are on her payroll so they get paid to kiss her a** and are all gay so there is no competition. Adam and GG are both very offended.

MJ and Vida talk privately and MJ tells her how much she has meant to her lately. Vida then tells her she likes Tommy but isn’t sure he is the right man to be her husband. MJ wants her support or wants her gone. Adam vents to Reza that he is not happy with this arrangement. GG adds fuel to the fire by asking Adam if he is OK with Reza being in the wedding considering Reza and MJ f***ed. No one can believe she said it and Adam tells Reza he is NOT OK with it. Reza tells him to get over it.

Reza takes to the stage and MJ joins him. They ask GG to raise her hand then ask everyone to look at the back of the room to welcome an old friend who was also married to Shalom. GG freaks out and breaks a glass. Shervin takes her out of the club and GG has a meltdown. They talk her into the return and Reva tells her that MJ invited Shalom’s ex to the party. Reza tells MJ that they need to make up before the whole issue gets too big.

MJ lays it on the line to GG. She tells her she loves her and asks if GG is for her or against her. Her father is dying and she does have time for BS. GG laughs and MJ leaves the conversation upset.