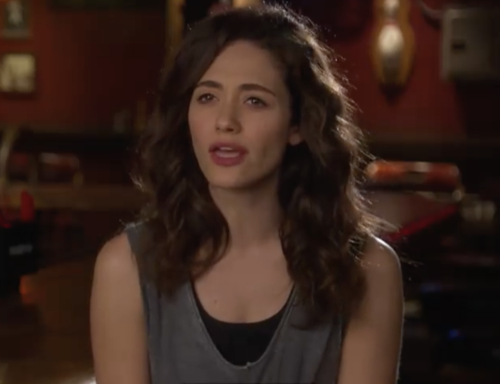 Tonight on Showtime the uniquely twisted and highly entertaining show Shameless returns with an all-new Sunday, September 9, season 1 episode 10 called, “Are you there Shim? It’s Me, Ian” and we have your weekly Shameless recap below. On tonight’s Shameless episode, as per the Showtime synopsis, “In the Season 9 premiere, Frank’s latest sexual escapades get him into trouble with the Hopkins Academy PTA; Fiona struggles with her decision to bail Ian out of jail, while he continues his Gay Jesus antics inside; Lip juggles taking care of Xan with a potential romance; Debbie fights for equal pay at work; Carl has to prove himself at military school; and Kev and V have trouble with the twins without Svetlana.”

Frank is on the floor, he just woke up, he looks at his phone, Greta messaged him that Hal just left. Frank gets washed up.

Fiona is doing paint touch-ups for the appraisal, so she can get money for Ian’s bail. Fiona hears a phone ringing and it’s not hers, she finds the phone and the call was from Patty.

Lip messages Eddie wondering if he is ever coming back and says he still has Xan.

Debbie gets her pay and then heads out to breakfast.

Frank is having sex with Jasmine when Beverly messages him that the coast is almost clear. Frank says he has to go, looks at Hal’s photo and tells him that he is a lucky guy,

Carl is finding it difficult to prove himself at military school.

Fiona is showing the house to the appraiser, she tries to flirt with him and he mentions something about having a husband.

Frank heads downstairs and takes a fork from Jasmine’s silverware box then makes himself a coffee. Frank’s next stop, Beverly. While they are having sex, Beverly gets a text message, there is an emergency PTA meeting.

In prison, Leo gets called to a cell and says no. Ian gets involved and says they are on strike until they agree to equal sexual respect. Ian has a visitor, it is Fiona and she tells him that she is trying to come up with the money for bail. Ian says that he needs a few more days, he has organized a strike. Fiona asks if he is getting his meds, he says he is protecting inmates from getting their emotions slaughtered, walks up and leaves.

Kevin and V are having trouble with the twins, they put them in a train and give them treats. Debbie arrives at the bar with the guys from work, they start talking and she finds out that she is being paid $15 an hour while they are paid $18 for the same work.

Lip is at the church when Camy’s sister Tammy arrives, she is the maid of honor.

Carl goes to see General Gene Howell and tells him that one of the cadets are not of the high standards that they expect but he will get him there. Howell tells him to clean up his platoon and his personal issues and there is a good chance he becomes cadet/lieutenant next year.

At the wedding, Tammy drags Lip into a small room and tells him that the best man and maid of honor always hook up at weddings.

At the PTA meeting, there is an announcement that there is an epidemic at the school. The meeting is turned over to Dr. Rosenbaum from the County Health Board to explain. In the past four weeks, many of the PTA members have tested positive for various STDs and soon as everyone in the room is tested, nobody can leave.

Debbie goes to see Jacob and tells him that it is not fair that she gets paid lower. Jacob says it is because she is a girl and if she doesn’t like it she can get another job.

Everyone is tested and they all start revealing who they had sex with, Frank is listening to it and just grinning.

Fiona and Ford are taking and his cell phone rings, but he doesn’t answer it. Fiona tells him that she got approved and can get the money to bail out Ian, Ford tells her to do anything but bail him out.

Back to the meeting, the women all reveal that they slept with Frank, he grins.

Kev and V are still having trouble with the twins. Kev wants sex and decides to take a ball outside with the girls, get them to play catch and tire them out so he can get back inside with V.

At dinner, Fiona reveals that she has the money to bail out Ian, nobody looks thrilled.

Kev exhausted the twins, he is in the house with them and they are passed out.

At the meeting, the men are upset with Frank for screwing all their wives. Franks tells them all to re-examine their relationships because the men have been neglecting them and they needed him. Darren says that Frank has a point. Beverly tells Len they have had not had sex in ages, Len tells her that he is having an affair with Richard.

Fiona is alone with Ford and he is sleeping, she goes to get his phone, he asks her what she is doing and she asks why he has two phones. Ford says the phone is for his mother, her name is Patricia.

Debbie is getting dressed, she wears layers of depends so she can limit her trips to the bathroom and be just like the men.

Brad tells Lip that he knows that he hooked up with Tammy at the wedding and maybe he should ask her on a date, she could be the one.

Fiona is playing around with Ford’s phone when she drops it in the toilet, she dries it out in a panic and dries it.

Kev and V are at the park with Molly and her dogs, and the twins when they see other young children who are in preschool and gives them an idea.

Lip goes to see Tammy and asks her to go out to dinner, she tells him that he is no fun and he screws for shit.

Ford walks in and Fiona is filling out the papers to process Ian’s bail.

Carl’s cadet that he was having problems with getting rid of his problem with Kassidi. and he jokingly says that he hid the body.

Everyone is released from the meeting, Frank gets kicked in the privates by one of the husbands.

Debbie goes to see Jacob and tells him that she didn’t take a pee break all day and wants the same as the men, he says ok and calls her Jugs… she finally realizes that he doesn’t call her after her name.