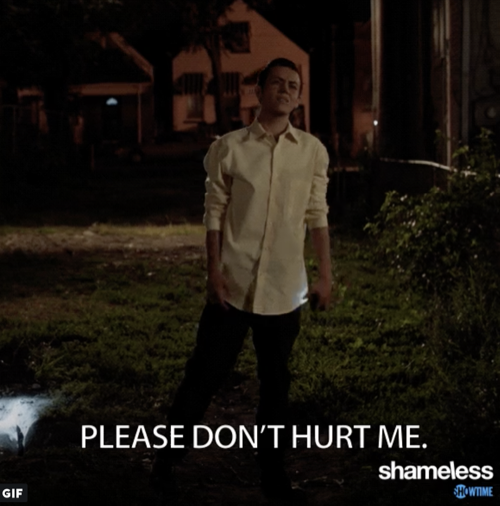 Tonight on Showtime the uniquely twisted and highly entertaining show Shameless returns with an all-new Sunday, October 07, season 9 episode 5 called, “Black-Haired Ginger,” and we have your weekly Shameless recap below. On tonight’s Shameless episode, as per the Showtime synopsis, “Frank’s new liver medication comes with tragic side effects.”

Tonight’s Shameless season 9 episode 5 is going to be great, and you won’t want to miss it. So be sure to bookmark this page and tune in for our coverage of Shameless tonight between 9 PM – 10 PM ET! While you wait for our recap, make sure to check out all our Shameless spoilers, recap, news & more, right here!

Ford and Fiona begin their morning together before Fiona heads to a meeting with Ian and his lawyer, his plea hearing is tomorrow; they make plans to meet later in the day at an art exhibit.

Debbie, Ian, Liam, and Lip are in the kitchen when Carl comes in and tells them he needs cocktail attire for a West Point mixer later in the afternoon. Ian says that Fiona wants him to take an insanity plea, say he was off his meds. Fiona comes in, pours herself a coffee. Debbie says she is on her way to meet Alex, her girlfriend, at Patsies. Fiona asks if she is gay now, Debbie says yes, Ian says no.

V and Kevin open the Alibi and Frank in there, he just woke up having slept there all night, he passes V $2 for drinks. A woman comes in looking for Kevin, her name is Allison and she is from the Women’s Equality & Empowerment march. Allison tells him they are very impressed with him for Vagina Safe.

Brad and Lip are at work when a man comes in with his motorcycle. All of a sudden, the power goes out in the garage. Brad heads outside and a power generator blew and is on fire.

Frank is in the toilet, his pee is brown, then he passes out. He is brought to the hospital, and after tests, he finds out that his body is rejecting his liver. The doctor prescribes some new medication but there are a lot of side effects, including erectile dysfunction.

Carl is all dressed up, Lip adjusts his tie and tells him he looks good.

Debbie is at Patsies with Alex, she ordered lots of food and tells her that she is not giving up on a relationship with her just yet.

Lip goes for a run, stops in a store and stares at the alcohol on the shelf but he orders packs of cigarettes instead.

Frank is on the way with V and Kev when he gets them to pull over the truck and he jumps out. He stands in front of a sex store and is upset when he doesn’t feel any reaction.

Fiona arrives at Patsies and tells it is time for an intervention because Geneva got to his head and he is considering not taking a plea deal. Fiona explains that she was at the lower office with Ian, Debbie tells her that he is a grown up now and it is time for her to let go.

Carl is at his mixer for West Point when he meets a girl named Kelly who offers to spice up his drink. Kelly takes him to one of the rooms and she offers him some of her father’s scotch, then asks if he wants sex. In the next minute, she passes out and top of him. He wakes up later only to be attacked by her and when he runs around the house, he bumps into her father who then throws him out.

Ian goes to see Mr. Malcovitch, he asks him how hard it was in the pen. Malcovitch is the boredom that kills you inside and if he were him, he would pack his shit and run.

Fiona heads home and searches for Ian, she finds a used boxed of hair dye and his drawers are empty. Fiona tells Lip that she thinks Ian is jumping bail. Lip says it seems like Ian doesn’t want to be found and it’s not up to him. Lip tells Fiona that he won’t help her look for Ian. Fiona heads to the bus station to look for Ian, forgetting all about having to meet Ford. Fiona receives a text message from Ford and heads out, meanwhile, Ian was at the bus station.

Liam comes home heads to the bathroom, Lip is in the tub and he says he needs to get out. Liam thinks he had sex with a trashy girl and needs to wash up.

Frank asks Liam to help him do self-electrotherapy, he pulls down his pants and shocks his privates.
Debbie is still at Patsies with Alex and is bored with the conversation. Alex is not impressed and tells Debbie she is not good at being a lesbian and sex. Debbie takes Franie and leaves Alex with the bill.

Fiona shoes up to meet Ford, she tells him she went after Ian. He is upset, he tells her she had one responsibility and that was to meet him, her brother is an adult. Later at home, Ford is listening to music when Fiona comes in, she had been looking for Ian again and didn’t find him.  Fiona tells Ford he was right, Ian is not a kid anymore, in fact, she doesn’t think any of her siblings need her anymore.

Frank is at the hospital again, he has third-degree burns on his privates. V tells Frank that an erection does not make a man and he is going to have to decide between his penis and his liver. Frank is about to be released and asks for drrugs, the nurse tells him that she is not permitted to give him drugs. On his way out, he sees a women come in screaming who is secured to a bed, he pretens to know her and asks the doctor to bring vicoden for her. When the doctor leaves the women tells Frank she has Vicoden in her pocket, she tricks him into setting her free from he constraints. The women jumps frank and he is thrilled to see that he has a reaction to her attacking him.

Debbie walks into the house and shouts that lesbianism sucks, Carl walks in and says women suck. Sissy knocks on the door and announces to Liam that she is pregnant – both Carl and Debbie look shocked. Debbie asks Liam when they had sex, he says today, Debbie knows that if Sissy is pregnant, it is not Liam’s baby.

Carl is outside burying another dog when Kelly tosses his phone at him. She asks him if he is single, he says yes and she kisses him.

Lip meets up with Toby for a drag race. Lip joins in, he gets on one of the bikes and races against another driver. Later, Lip returns home and finds Ian in the kitchen and tells him that the black hair is a good look for him. Ian says that he ran, but he ran back. Lip tells Ian that he really freaked out Fiona. Ian asks if Xan is gone for good, Lip says probably.

Ian is ready for court, the family is with him. Fiona tells him that whatever he says in court, she is on his side. In court, he tells the judge that he torched the van because he was saving a child. He goes on to say that he is bipolar, was off his meds and pleads not guilty by reason of insanity.