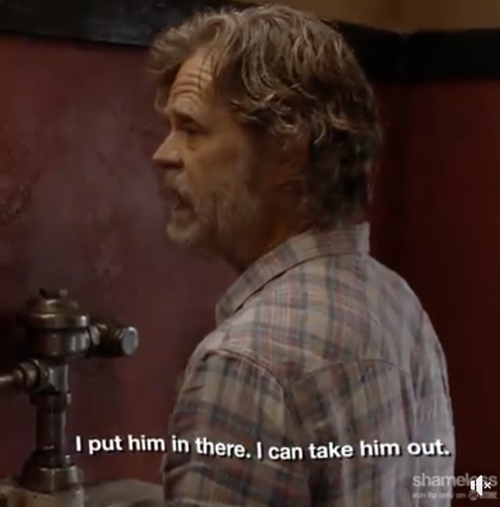 Tonight on Showtime the uniquely twisted and highly entertaining show Shameless returns with an all-new Sunday, October 15, season 9 episode 6 called, “Face It, You’re Gorgeous,” and we have your weekly Shameless recap below. On tonight’s Shameless episode, as per the Showtime synopsis, “Frank gets Liam to help chase down a romantic connection.”

Tonight’s Shameless season 9 episode 6 is going to be great, and you won’t want to miss it. So be sure to bookmark this page and tune in for our coverage of Shameless tonight between 9 PM – 10 PM ET! While you wait for our recap, make sure to check out all our Shameless spoilers, recap, news & more, right here!

Ian puts his stuff in the attack, Lip and Deb want to do something with him but he would rather stay home. Frank is up, he tells Liam to get up, he needs help. He goes on to say that he has a love interest, Ingrid, that he is going to see. Liam leaves with Frank. Ian is adamant that he wants to stay home, Deb goes to work.

Sophia and Ford check out an apartment that is $3000 a month, she says they can’t afford it, he says they can. Sophia has a meeting with Max and wants to think about it. Ford takes her to the side and says he thought they were ready to take their relationship to the next level, she gives in quickly and says ok, let’s do this.

At home Carl, is wrestling with his girlfriend, he calls it survival training. They both go on to show Ian some moves.

Phil is spending a few hours with a woman, she is a keynote speaker and he has to make sure she doesn’t drink, her name is Jen Wagner and she is a movie star.

Fiona meets with Max and a few others to find out what the hearing board said about the Sunset Brook project. Max says they denied their request for rezoning, although Fiona didn’t expect that, Max says he did. Max goes on to say that the city is going to make do lots of improvements and it will take another twenty grand a piece. They also need a lawyer and that is going to cost five thousand each.

Frank and Liam are at a hospital to pick up his new women, she is just finishing her 72 hours.

Lip is at the hotel watching Jen Wagner when she tries to sneak out of her room. Lip runs after her, she gets in the elevator and it closes without him. Lip runs down the stairs and catches up to her, she says she is just going for a walk. Lip tells her that he is concerned she is going to drink, she says she can because she has twenty hours before she has to speak. Lip doesn’t give up. Jen starts to run again and tries to lose him. They run but Lip catches her and tackles her to the ground, she is upset and he tells her if she runs again, he will continue to catch her and tackle her.

Fiona gets home and is surprised to see Ford packing up for their move. Fiona tells him that she is having second thoughts. Fiona then tells him that she smelled mold in the apartment and is so bad for their lungs; she thinks they can find something better and cheaper. Fiona goes on to say it is not time for her to be spending that much money, Ford says he is going to leave to cancel the cheque, he is upset.

At home, Ian is still getting his lesson on self-defence for prison when someone is at the door, it is a man named Antonio wanted to give him some information before he is sent up.

At the hospital, Frank is still waiting for his woman with Liam. Frank shows him a scar on his foot when Monica tried to set him on fire.

Lip and Jen are sitting in the park and they talk about when each other began drinking; then they decide to go get some lunch. At lunch, Jen orders a virgin bloody mary and goes to drink it when Lip hits it out of her hand; when he was in the washroom, he noticed her telling the waiter to put alcohol in it.

Fiona goes to see Max, she tells him that she wants out of their deal, she has another opportunity and she needs her cash. Max tells her that she can’t get out, the money is invested already in the project. Max reminds her that he needs his 35k.

Fiona is at the bank, she wants to get money and is told it would take six weeks to get the $25k, but there is an expedited method that costs 10%, Fiona says ok.

Antonio is showing Ian the safe places in prison when Fiona walks in and says she needs money. Antonio offers to loan her the money, he knows some guy but they would take a cut. Fiona says she is good and reminds Ian that she is driving him to prison in the morning.

Jen offers for Lip to touch her breasts if he lets her have a drink, he says no. Jen heads to the bar and orders a drink when people start to recognize her and cameras start going off.

Back at the bank, Fiona is told that she probably won’t get approved for a third loan because she doesn’t have enough revenue. Fiona heads to the restaurant and opens the safe, inside there is cash, but she has second thoughts about taking it.

Finally, Frank’s woman is released, her names is Dr. Ingrid Jones. Frank goes to see her, but she denies knowing her and leaves with her ex-husband Randy; Frank follows them on a bike and tells Liam to take a bus home.

Lip takes Jen home with him, he is not leaving her for a minute. Everyone shares White Castle and Jen is really enjoying the conversation. Deb arrives home and asks why the chick who does the makeup commercials sitting at their table. Jen gives her two cents about prison, she tells Ian to find a hobby.

Fiona is drinking while the staff in the restaurant are celebrating Linus’ birthday. She heads outside and continues to drink under a bridge. All of a sudden, Kev and V are on the top and they are throwing their sex toys in the river.

Jen is picked up to go back to the hotel, Lip and Ian are on the stairs in front of the house and Lip gives him a wad of cash for his commissary account.

Frank follows Ingrid home, he knocks on her door and she asks if he is stalking her. She tells him she was off her meds and is sorry, he says he loved the way she was.

Fiona arrives at her apartment and there is music playing loud and Ford is not there. Fiona tracks Ford’s iPhone and goes in search of him. She is still drunk and looks a mess, she drives up to a house and a woman comes to the door, then Ford is there. The woman’s name is Patty, Fiona reminds Ford that he told her his mother’s name is Patty. The woman says she is his wife, there is also a child walks up to the door and he calls Ford daddy. Fiona says she is an idiot, turns around to leave when Ford says he is separated and they are getting a divorce. Fiona calls him an asshole and leaves. Fiona smashes her car into another one not far done the road, she gets out, blood on her face, she walks down the street.

The next morning Fiona doesn’t show up to drive Ian to jail to Kev offers to drive him. The rest of the family is with Ian and they hug him and send him off.

When Ian is dressed in his prison overalls and escorted to his cell, he has a suprise; Mickey is his new roommate.