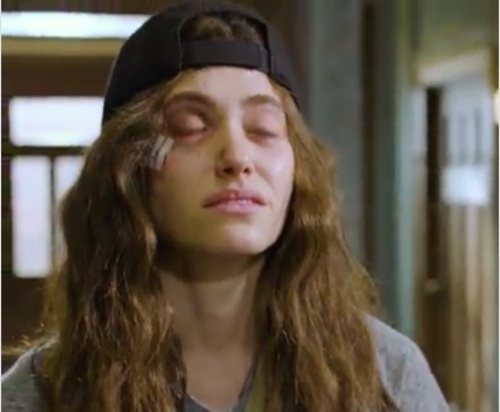 Tonight on Showtime the uniquely twisted and highly entertaining show Shameless returns with an all-new Sunday, October 21, season 9 episode 7 called, “Down Like the Titanic,” and we have your weekly Shameless recap below. On tonight’s Shameless episode, as per the Showtime synopsis, “Debbie helps Fiona pick up the pieces at a low point.”

Tonight’s Shameless season 9 episode 7 is going to be great, and you won’t want to miss it. So be sure to bookmark this page and tune in for our coverage of Shameless tonight between 9 PM – 10 PM ET! While you wait for our recap, make sure to check out all our Shameless spoilers, recap, news & more, right here!

An alarm is going off and the whole family wakes up. Lip and Carl raise a ladder to the attic, there is an alarm clock with a photo of Ian that reads, “Miss Me Yet.” Debbie says it is sweet, everyone heads back to bed. Lip smiles. Frank races down the stairs in a sled and helmet, his new girl Ingrid laughs and enjoys it, she says she never realized how fun indoor tobogganing is and you shouldn’t be off your meds to have this much fun. Frank says that her weed is strong, Ingrid says that it makes her feel alive.

Time for breakfast, Lip is making it. Debbie offers Liam money to be a nanny to her daughter this summer, Lip says no way, he is a minor and needs an adult watching him. Debbie says better Liam than a daycare that crams too many kids inside. Carl says that Kelly is coming over to help him move, he is going to take Frank’s room and leave Lip solo in the boy’s room. Debbie says she is worried about Fiona, she didn’t drive Liam to prison like she said she would.

V and Kev are up, V collected all the toys and clothes that the girls have grown out of. Kev is not happy, he doesn’t think that V should give everything away. V said they are done having babies so she doesn’t think they should keep everything. Kev is shocked, he didn’t know they were not going to have any more babies, they just agreed to talk about it later down the line. V tells Kev to pick out five items for sentimental reasons, but the rest is going.

Debbie goes over to see Fiona, who wakes up to find blood on herself. Debbie asks what happened to her, Fiona says she was in a car accident. Debbie is shocked, she tells her that the family thought she was pissed and that is why she didn’t show up to bring Liam to prison.

Kelly arrives at the house, Carl wants to move into Frank’s room and Kelly wants to do homework.

Frank is in the bathtub, Ingrid has a razor and she is going to shave him from the neck down and make him her adorable little hairless mouse boy. Frank laughs. Ingrid lathers shaving cream on Frank and he says there is nothing she could do to scare him, he has seen it all and smoked it all. Randy shows up in the bathroom and scolds Ingrid and reminds her about taking her meds and that she has to see patients.

Debbie goes with Fiona to retrieve her vehicle, it is all smashed in the front. Fiona tells Debbie she crashed her car because she was driving drunk and she didn’t call the police. Fiona goes on to say that the zoning fell through on her old age home, which means Max is stalking her for 25k or else she loses her entire 100k investment and without an immediate profit on that, she can’t afford her mortgages and she will have to sell her building. Furthermore, it turns out that Ford is married and she found that out just before she totaled the car. In fact, she is so far up shit’s creek, that she doesn’t even have lunch money and she forgot that her own brother was going to prison. Debbie says that was a shitty couple of days. Debbie assures Fiona that it is going to be ok. Debbie says she has a friend who might be able to help them out with the car.

Kev is going through the twins’ things and can’t believe the things that V was going to give away. V’s friend Chantal arrives to pick up the stuff that V left for her, Kev doesn’t want to answer the door and scream that V and Kev are dead and she is next if she doesn’t go away.

Frank is in Ingrid’s office, he says she looks sexy. Ingrid tells Frank to go to the Starbucks across the street while she meets with his patients, he tells her he wants to stay there and he will be as a quiet as her hairless mouse.

Debbie and Fiona bring their car to his friend, they are going to strip it, give them $600 and tell them to call the insurance company, they will pay off the lease. Fiona tells Debbie to leave, she can take care of things now.

Ingrid sees her first patient, while Frank hides under her desk; he takes off her underwear and goes down on her while she is seeing her patient.

Debbie burst into the house and tells Lip that Fiona had a car accident and Ford has a whole other life. Lip goes to find Fiona, Debbie says that she is going to find Ford. Lip finds Fiona, she tells him that she is selling her building.

Ingrid tells Frank they are going to role play, she is going under the desk and he can tell her patient that she is out sick, he just has to listen and nod. Debbie goes to see her welding friend and asks her if she wants to join her when she tortures Ford. Ingrid’s client is with Frank and she doesn’t understand how Ingrid could not be there. She says her ex keeps calling her, Frank smashes her iPhone and then tells her to get a haircut and stop walking around looking like a sorry sack of shit.

Lip is at the christening for Brad’s child when Tami shows up 20 minutes late, she is the godmother. After the ceremony, Tami was make out with Lip and he refuses. Lip is with Jason and introduces him, then tells Tami he is his sponsor from AA.

Fiona puts out her open house sign and gets prepared for people to visit the apartment. Max shows up at the apartment and is surprised how terrible Fiona looks. Fiona tells him that she doesn’t have the 25k, he says she told everyone she could swim and now she is drowning. Max asks if there is anyone she can call, she says no, that is why she is selling her apartment building. Max offers to sell her building for her, he will waive his commission and tells her that he is not as big an asshole as she thought he was. Max offers to give her 292K plus he will take care of the 25k she owes, it will leave her credit intact as she will pay off her mortgage, but it will leave her with nothing else.

Kelly is still studying with Carl, Liam is helping when Kev walks in with bags of the girl’s things and says that he is going to stash it in the basement and he doesn’t want V to know.

Kav made V dinner and gives her a baby sock, he tells her that they should have another baby. V says hell no, she is not having another baby. V says they are too broke to have two more kids, Kev says he will do everything, she just has to be inconvenienced for nine months.

Ingrid’s ex warns Frank about her, she stabbed him fourteen times over the years and he shows Frank the scars.

Tami tells Lip to share a smoke with her. Tami says the last time the saw each other he asked her to dinner, she wants to know if the offer is still good. Lip says yes.

Fiona packs up her things, and her dog, then goes to leave the apartment, but the dog doesn’t want to leave.

Frank falls asleep for a bit and wakes up to hearing smashing glass. Frank suggests that Ingrid lay down, she doesn’t want to. Then, Ingrid takes a knife to Frank’s throat and tells him to eat the brie on the tray that she prepared.

Fiona is in a supermarket and helping herself to many bottles of alcohol and drinking as she walks down the isles picking up food and party supplies.

Kelly is still studying with Carl, she is determined to get him into West Point because she wants a boyfriend from West Point.

Frank heads to the bar, he and Kev say they are having troubles with the ladies. Kev says he wants another baby and V won’t let him have one, Frank offers to sell him a Gallagher.

Frank arrives back at Ingrid’s house, she is passed out, Randy gave her meds to knock her out. Randy tells Frank to clock out when Ingrid awakes she won’t remember anything.

Fiona is throwing herself a welcome home party. Carl, Kelly, and Liam watch her put a side of meat, still in plastic in the oven. Debbie arrives home and tells her to come with her.

V goes to the bar to see Kev, it is closing time. She tells him that if he wants to talk about adopting a newborn, they can discuss it, but she doesn’t want to have a baby. Kev is happy.

Randy and Frank enjoy a drink together. Frank tells Randy he needs a break, some time for him. Randy says he wants to see Mount Fuji, then Franks says he should book a flight and do it.

Debbie shows Fiona what she did, there is a huge sign that says “This man is an asshole” and Ford is stuck in it, with his pants down bearing his back end. Lip shows up and says great work. Debbie hands Fiona a paint ball gun, she shoots Ford repeatedly in the backside.