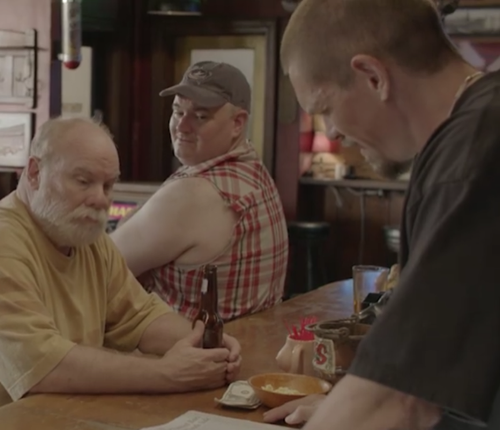 Tonight on Showtime the uniquely twisted and highly entertaining show Shameless returns with an all-new Sunday, September 23, season 1 episode 3 called, “Weirdo Gallagher Vortex,” and we have your weekly Shameless recap below. On tonight’s Shameless episode, as per the Showtime synopsis, “Frank faces obstacles in his new role as a campaign manager; Fiona prepares to close her real estate deal.”

Carl enlists V to help him get a West Point recommendation from a congressman; Xan’s medical emergency puts Lip in a compromising position; Debbie gets closer with her partner in crime; Ian embarks on a spiritual journey.”

Ian and Lip are outside the house, Ian says he is waiting for Shim who is God when Frank walks up with his signs. Frank tells Ian that he has to stick to Buddhism, Christianity, and Judaism; if he breaks the rules, he burns in hell for all eternity. Ian heads to a Buddhist temple and tells a Buddhist that he needs to speak to God. Ian is not doing well on his journey, he leaves the Buddhist temple unsatisfied.

Carl fills an urn with park sand and brings it to one of the owners of the animals that they think passed away at the vet.

Carl is taking care of the animals that were on death row at the vet. Back at the vet, Carl saves another dog. Carl takes a little Yorkie to the Alibi and talks to V about his wanting to go to West Point. He tells her that he went to Congressman Uberman’s office and couldn’t even get an appointment. V and Kevin know Uberman, Carl asks if V can help him out. Ian then heads to a synagogue. He speaks to a woman there, she tells him that God only spoke to Moses.

Lip gets a call, Xan is in the emergency room. At the hospital, Xan broke her arm from a fall in the park and is told that she will only be released to a legal guardian or parent.

Debbie is sharing a meal with her new partner in crime. The two head to work and stare across the room at each other and then head to the bathroom to make out.

Kevin reads in the paper that the Alibi was named the rapiest bar on the south side. Frank walks in and brings both hats, t-shirts, bumper stickers and buttons for the campaign. Frank gives a campaign speech for Mo White and collects campaign contributions. Frank leaves and everyone discusses the fact the bar was called rapey, Kevin looks around at all the suggestive things he has in the bar and hates to agree, maybe it is a bit rapey.

Liam is at first day in the new school and things are not going well, kids are already giving him a hard time. In class, Liam offers to do one of the student’s homework in exchange for protection against a girl that is picking on him.

Frank goes door to door with Mo White to campaign.

Fiona is trying to find something to wear to a meeting with Max at a bar to sign papers. Ford wants to be there to and Fiona says no. The two start to get into a disagreement about their relationship and Ford tells her that he is jealous that she is going to a bar to meet Max, even if it is business.

Lip calls Brad to come to the hospital, he asks him to pretend he is Xan’s dad so he can get her released. Brad wants nothing to do with this, he finally got his crap together – he leaves and the nurse sees him leave. Lip tells her that was Xan’s dad, Mr. Reliable. A social worker shows up, Lip tries to explain that he takes care Xan, the social worker says they will sort it all out when DCFS shows up. When the nurse is not looking, Lip disconnects a tube from another patient that sets alarms going off, it gives him the opportunity to grab Xan and sneak out of the hospital.

Frank is with Mo and his angle keeps buzzing, it turns out that he has an ankle alarm on and every time he is within so many yards of a school the buzzer goes off. Frank is surprised and asks what it is for, Mo says it was years ago and the girl told him she was 18, but she wasn’t. Mo tells Frank not to give on him, he only needs to wear it for another six months when he is off parole.

At the Alibi, Kevin distributes forms to the men and tell them they need women to sign giving her consent before they bother her. Kermit says he is never getting laid again. Kevin says that there will be no more drinks called, “sex on the beach,” it will just be called beach.

Ian is now in a church, he asks a priest if he knows what God is going to do next. The priest tells him to read the bible and start with the ten commandments.

Mo White and Frank head to the Alibi. Frank pays his tab and Mo gives everyone a campaign pitch. Kevin asks Mo to sign a consent form and Mo misunderstands and starts talking about the girl who was 15 and told him she was 18. Frank ushers Mo out, but too late, V remembers Mo and the 15-year-old. Frank tries to put a band-aid on the damage that Mo caused, he gives a speech to everyone about second chances and everyone in the bar starts clapping and chanting Mo White’s name.

V goes to visit Congressman Uberman. In his offer, V is all decked out in a sexy outfit and a whip, she tells the congressman that she wants Carl recommend to West Point.

Fiona is at Alibi and talks to V about Ford being jealous and she doesn’t understand it.

Debbie arrives home and Ian is reading the bible. Debbie asks him when he knew for sure that he was gay. Debbie tells him that she made out with a girl, he says she is not gay. Ian tells her that he is tired of the whole gay Jesus thing, Debbie tells him to stop trying to save the world and try saving himself for a change.

Carl is with Congressman Uberman, he tells him that he knows finer candidate then he to go to West Point.

Fiona heads home and finds a trail of condoms to the inside of the apartment, she finds Ford naked in a bed with a bottle of bubbly, she tells him that this is one hell of an apology.

Kevin posts a sign on the front door of the Alibi, “Certifide Vagina Safe.”