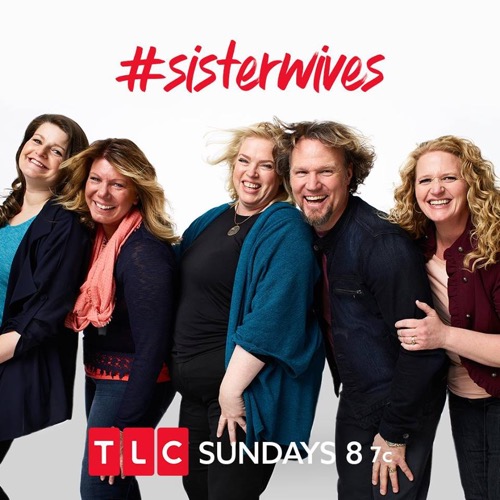 TLC’s reality show about a polygamist family Sister Wives returns tonight with an all-new Sunday, January 14, 2018, season 9 episode 2 called “Groomzilla” and we have your weekly Sister Wives recap below. On tonight’s Sister Wives season 7 episode 9 as per the TLC synopsis, “Mykelti, her moms and her fiancé, Tony, go wedding dress shopping, and he’s very opinionated. Then, the Sister Wives go see the B&B Meri wants to buy in Utah, but worry it will pull her away. Later, Madison shows up with big news, leaving Janelle in tears.”

The show opens with Christine and Mykelti getting ready to go look at wedding dresses. Christine doesn’t agree that Tony will be joining them. The other sister wives and Mykelti’s best friend Anna will join them as well. Everyone is set loose in the store to find a dress. The owner of the store hopes there won’t be too many opinions that confuse the bride. Everyone loves the first dress’s shape but it is too sparkly. Christine asks Tony if he has found the piñatas for the wedding yet. He has not. He plans to have life-sized piñatas of himself and Mykelti. He will break the one of her open and she will break his open. The moms don’t like the idea but Tony says it is part of his heritage. Tony and the mom’s debate about his plan to smash cake into Mykelti’s face during the reception.

Mykelti’s comes out of the dressing room in her favorite dress so far but everyone hates it. The whole group feels bad about their negative comments when they realize she loves it. It turns out she didn’t love it but she was hoping to keep everyone quiet until she has a chance to decide for herself. Tony tells the moms he wants Mykelti to wear her hair down but the moms want it up. There is a lot of fun in the banter. Mykelti finds her perfect dress and Christine breaks down in tears. All of the moms share what they love about Tony. Robyn loves his heart and they all know he will be a wonderful husband for Mykelti.

Christine goes to her voice lesson to get ready to sing at Mykelti’s wedding. Her goal is to increase her confidence so she isn’t too nervous on the big day. While Christine wasn’t 100% behind the idea of Tony and Mykelti getting married at first but now she is thrilled at the idea.

Meri is very excited about the possibility of buying her great-grand parent’s house. It is on the market and has been run as a bed and breakfast for the last 15 years. The wives head to the house and see it for the first time. They love it. Meri’s mom and sisters join the wives. Meri wants the house to be back in the family. She has strong feelings of nostalgia about the house. The other wives love it the idea but Cody just isn’t sure. He doesn’t think it makes good business sense. As the wives realize there are only four rooms to rent out they are less sure of the plan.

The owner shares that one of the rooms is haunted. The group thinks it is Meri’s great-grandmother. The other wives think this ghost is a great marketing tool and will help keep the place filled. Meri shows the group a small house on the back of the property she would like to turn into an apartment for her to use when she visits. The other wives worry that this plan will pull Meri away from the family. They know she has felt disconnected from Cody and the others. This purchase won’t help bring them all together.

Janelle loves that the idea makes Meri sparkle but she is worried that because they are a polygamist family people in the town won’t want them. All of the other wives agree that Meri has been so distance but she argues that this will help her feel happy. She argues that she is an empty-nester. While the other wives still have kids at home Meri doesn’t. She is not going to come into the other wives homes and raise their kids. The wives want to support Meri but they also don’t want to lose her.

The wives, Mykelti and Tony head out to taste food and cakes for the reception. Robyn had a sick baby so she stayed home. The group tried three different tacos and decide on chicken and carne asada. They will have tacos, chip and salsa and two desserts. They will also have a wedding. The wedding cake flavor causes a lot of debate. Tony wants the cake to be Tres Leche but the baker says it isn’t possible because soaking the bottom layer will make the cake structurally unsound. Tony is insistent and the other wives come to Mykelti’s aid in trying to defend her choice. Janelle thinks Mykelti is being pushed around by Tony and she doesn’t like it.

Rather than have one big cake they decide to have several smaller cakes including a king and queen chess piece. They will have a cake buffet with six different flavors. Cody LOVES the mocha cake and the group and is able to agree on all of the flavors. The moms get ready for Mykelti’s bridal shower by doing a lip syncing skit. Janelle isn’t really into it but wants to make it up to Mykelti because she reacted so badly when she first heard she was getting married. They have fun practicing their act but still, have a lot of work to do.

Cody and Janelle’s daughter Maddie and her husband Caleb return home with some news (both good and bad news which makes Cody very nervous.) Cody opens the box they give to him and finds a pacifier. Maddie is pregnant! The bad news is more March birthdays in the family. Everyone is thrilled but decide to keep it a secret until Maddie is in her second trimester. This will be the first grandchild in the family.