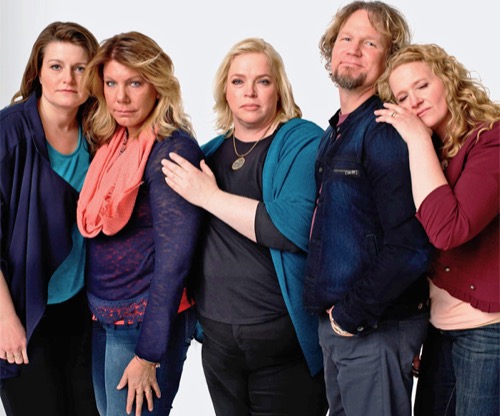 TLC’s reality show about a polygamist family Sister Wives returns tonight with an all-new Sunday, February 25, 2018, season 9 episode 7 called “Risking Arrest” and we have your weekly Sister Wives recap below. On tonight’s Sister Wives season 9 episode 7 as per the TLC synopsis, “The Browns are distraught that the Utah legislature is voting to strengthen the laws against polygamy. Friends are planning a protest march, but if the Browns go back to Utah they could be arrested.”

The Browns didn’t always live in Las Vegas. They were originally from Utah and had loved their lives there until they had been forced to leave the state of Utah after for being polygamists. Their way of life could have seen all the adults get sent to jail and possibly even lose custody of their kids, but Kody made sure to get his family out of there while they still had time and that led them to make their lives elsewhere. Like in Las Vegas where they wouldn’t be persecuted for being who they were and so the move had done wonders for them as a whole!

The family had had to rebuild their lives and at first that had been difficult because they had been cut off from each for a while yet they eventually got the chance to live together again and they’re now in a better place if not stronger place than before. They get to live openly as polygamists and didn’t have to lie about Kody. Kody was the one that was most at risk as a polygamist because he could easily get arrested for having more than one wife and so rather than miss out on seeing his family – Kody had sued.

The Browns sued the state of Utah when they left and they had won. They were told that if they return that they wouldn’t be prosecuted and so they thought Utah was finally going to respect their lifestyle. However, the state was seemingly finding new ways to backtrack on whatever victories that were granted to the Browns. The family had recently learned that Utah had created new legislation that was just going to make things harder for everyone they had left behind back home and who were still living in secret as polygamists. So tonight Kody talked to his wives.

Kody had told them that his friend Joe Darger had wanted to put together a march for polygamists and that he wanted to join because he was ready to fight. They had tried to fight through legal means and they thought they had won only to see that finish line gets pushed even further back. Therefore, Kody was tired of sitting back and trying to change their world from his safe place in Las Vegas. Not everyone was so lucky and so Kody had told his family that he wanted to join the march because he felt now was time to fight.

The others just hadn’t been all that sure. Meri and Janelle had wanted to join the march because they had seen how effective the Women’s March was and had wanted that same feeling of being able to do something about the decisions that affected them. Christine and Robyn, on the other hand, had been scared. They knew they could get arrested and so they had questioned the trip as well as the march. The march was important to all of them and it could change things for the better, but there was this chance that they could lose everything by going back to Utah because they weren’t like the others.

The Browns were a well-known polygamous family and so they could easily get arrested as a way to prove a point to the other polygamists out there yet the adults ultimately decided that they should also talk about the decision to go with their children and their later conversation had been very enlightening. It seems the ones they thought would want to go, hadn’t wanted to go. Paedon had told his parents flat-out that he didn’t want to go back to Utah or do the march. He was one of the kids that had taken their move the hardest and he hated being forced to leave.

Paedon had understood why they had to leave now that he’s older and could process everything though he said that there wasn’t a point in trying to decriminalize it. He said the same people that hate it now would hate it later and so he didn’t think the march would change anything. But his mother had still wanted him to go. Christine had wanted his support and had been shocked when she didn’t get it because she thought Paedon would be all over stopping this latest bill that would ostracize them.

Christine had been so shocked by Paedon’s decision that she had even tried to change his mind and, not that surprisingly, it didn’t work. His mind had been set and so Christine merely had to accept it. There were also a few other things that she had had to take care of and that helped her to move past Paedon’s decision because he couldn’t be the only one she had to worry about. She also had to consider her other children and had named Robyn as a temporary guardian just in case something happens to her in Utah.

Robyn for her part had talked to her son Dayton about whether he wanted to go and he had. Dayton had wanted to support his family because he like the others knew that a lot of people weren’t going to show up and risk getting arrested. So Dayton went to more or less add to their numbers and him leaving had been hard on Robyn. She was in such a state of fear that she couldn’t think about possibilities. She settled on handling whatever problems that come up when they come up and so staying behind had been what was best for her.

Robyn had been a nervous wreck at just saying goodbye to her family that she later admitted that she wouldn’t be able to breathe comfortably until they came back home safe. Yet, the others had tried to be hopeful. They went back to Utah hoping they could help change things and had come across their first test when they all came together to plan the march. The march was going to be about just showing up and not a lot of people could show in the planning section which worried Kody. Kody feared there wouldn’t be enough of them to be heard and had questioned whether they left the safety of Las Vegas for nothing.

Except there had been stories that had reaffirmed their commitment. They heard from their friend who had been walking home as a kid with a girlfriend of hers and they had come across a flasher, but while the girlfriend immediately told her parents about what happened, the kid that had two moms was too afraid the cops would find out about it and take her dad away. So while there were some out there that claimed they wanted to stop polygamy in order to stop child abuse, they were enforcing this code of silence that was helping no one. Neither side wanted children to get hurt and so they marched the next day shouting “Families, Not Felons”!

Meri had also gotten a surprise when Mariah showed up to march with his girlfriend. The two hadn’t been sure if they had wanted to go because they didn’t think this particular march was their fight however Mariah ended up going because she had wanted to support her family and so she ignored a few signs she hadn’t liked including the one that said “If We Were Gay, We Would Be Ok”. She said there was still a long way to go in the community and hadn’t brought anything up at the march because she hadn’t gone to start a fight. She simply went so that her family knew they were supported.

They did! They were in a group of friends and family and they traded stories amongst each other about how proud they were of their lifestyle in spite of the opposition they constantly face.