BY Kristine Francis on June 18, 2018 | Comments: Leave Comments
Related : Reality TV, Recap, So You Think You Can Dance, Television, TV 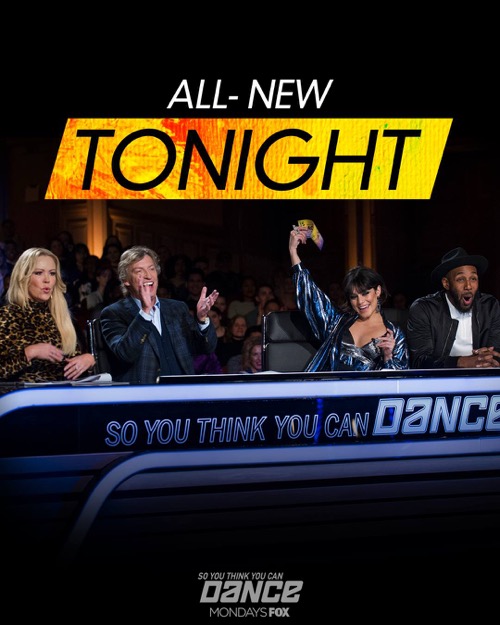 Tonight on FOX their Emmy-Award Winning So You Think You Can Dance premieres with an all-new Monday, June 18, 2018, season 15 episode 3 episode and we have your SYTYCD recap below!  On tonight’s So You Think You Can Dance season 15 episode 3 as per the FOX synopsis, “The judges make their way to New York with hopes of finding even more exceptional talent.”

New York was ready for anything on tonight’s all new episode “So You Think You Can Dance”. It was another night of auditions and the first one up tonight was Emily Carr. She was a 18-year-old from Springfield, New Jersey and had been dancing since she was two and her older sister started to take classes. Emily was also a Contemporary dancer and had been a nervous wreck until she began to dance. She gave a moving performance and the one thing everyone congratulated her on was her control. Emily moved like an expert because she had been dancing before she had walking down, so she was so good that the judges asked her who was her biggest inspiration and she said it was her big sister Ashley.

Ashley was allegedly the better dancer and so everyone asked why she didn’t audition this year. It turns out while Emily was nervous, her sister Ashley could be really shy. The judges later got to meet Ashley and asked her to try-out next year because they wanted to see what she could do. Especially after they gave Emily her ticket to the Academy! The next dancer the judges saw was Gabriel Alvarez. He was frim a bad neigborhood Santo Domingo, Dominican Republic and had turned to dance as a way to escape where he was from. It served to keep him out of trouble and it eventually got him on the path to earning his U.S. Citizenship. So Gabriel loved dancing more than anything.

Unfortunately, Gabriel had been so eager to stand out that he stood out in the wrong way. He brought in props and what he did with it had been great. It merely hadn’t been dancing! The judges were in the middle of telling him that they didn’t see a lot of dancing when Gabriel asked for the music to be turned back on and had tried giving his audition another try. It had been admirable thing did by trying to give it another go and at the same it hadn’t been good enough. It was the basics in Break dancing and so the judges all to him they were sorry but it would have to be a “no” from them this year. That didn’t meant he couldn’t keep working on his dancing and no one knew that better than the next dancer.

Evan DeBenedetto came back this season. He lost out last season to the winner Lex and so he was back for another attempt at winning the title. Evan was from a 19-year-old Tap Dancer from Ansonia, Connecticut and he came back this year having improved his skills. He gave another wonderful tap audition and the judges could see how far he’s come. They applauded him on improving since they last saw him and tonight they gave him a ticket to the Academy. Evan showed that that everyone should at least listen to the critiques and that by following through on them it could mean so much for them. The judges were all about letting in only the best this year because they rearranged the format and so they were being extra tough on everyone.

The next dancer up was Rachel Blanchard. She was a young teenager from Albany, NY and everyone called her “Baby” for the eighties vibe she has, so this time no one put Baby in a corner. They let the Contemporary/ Ballet dancer have her fun on stage and, although there were a few things the judges hadn’t liked because they thought she could work on her transitions, they believed her to be deserving of a ticket to the Academy. The next dancer that the judges saw was Kyle Bennett Jr. She had tried out last year and sadly he had let his nerves get the best of him. He hadn’t gotten picked by Fik-Shun and listened to what his role model said. Kyle listened so well that he actually worked on his confidence as well as his dancing over the past year.

Kyle came back stronger because of that. He was Animation/Tutter in dancing and tutting for those that don’t know what it is was creating geometrical shapes with one’s body. Kyle’s newfound confidence was out tonight when he gave a breathtaking performance and had the judges all proud of him. They’re proud of the work he did and they gave him a ticket to the Academy because he once again earned it. The next dancer may not have been someone returning after a defeat but she remained memorable just the same. Her name was Victoria Neukom. She was a 18 year-old from Dade City, FL and her family used to own a farm. They used to grow and sell oranges until a disease one year cost them everything. They lost the farm and even their house.

Despite that, Victoria’s family always made sure she still attend dance class. They knew that was her escape from their situation and ensured she would always have it if she needed it. So tonight Victoria showed off what she learned. She was a Contemporary dancer and one of her critiques would come from Nygel. Nygel later said that he thought he saw more gymnastics than dancing and so he asked Victoria to work on that going forward. She still received a ticket to the Academy because there was a lot there that judges did appreciate and so she wasn’t part of the group that went home empty-handed. That particular group included the twins from Bulgaria. Gratisiela and Desislava Sandeva were so cute and sweet. They were beginning to learn how to dance and so they needed more practice before they were ready for a show like this one.

The next set of siblings had better luck. Elan and Jordynn Lurie danced Latin ballroom and the first tie they danced together it had been their mother’s idea. She wanted to do something special for her son Bar Mitzvah and so she threw in a choregraphed dance. The siblings hated it back then and eventually they decided that do in fact like dancing with each other, so they gave it another go and tonight they won themselves a ticket to the Academy based on their amazing routine. There were still a few nitpicks like Elan needed to work on his footwork and that they should smile more and besides that they once again did their mother proud.