BY Kristine Francis on August 13, 2018 | Comments: Leave Comments
Related : Recap, So You Think You Can Dance, Television, TV 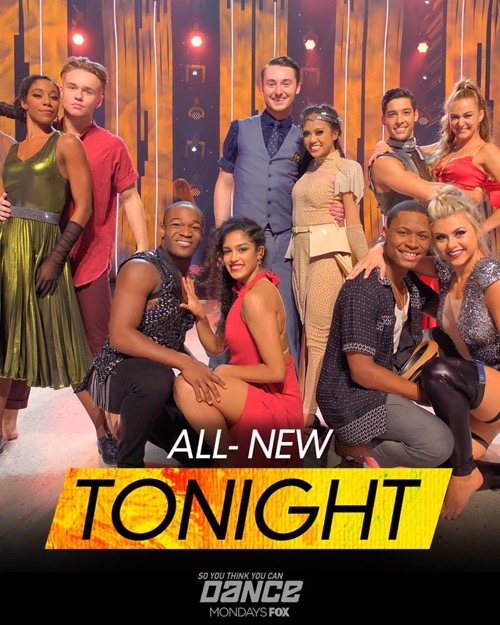 Tonight on FOX their Emmy-Award Winning So You Think You Can Dance premieres with an all-new Monday, August 13, 2018, season 15 episode 10 episode and we have your SYTYCD recap below!  On tonight’s So You Think You Can Dance season 15 episode 10 as per the FOX synopsis, “After the Top 10 compete for the nation’s votes, two dancers must head home. Find out who will make it into the Top Eight and stay in the running to become America’s Favorite Dancer”

The contestants dealt with their first elimination on tonight’s all-new episode of “So You Think You Can Dance”.

The eliminations come at the end of the night, but before they found out who was going home, they once again had to dance to save for their lives. The Top Ten found themselves paired off a second time and the only difference this time around was their dancing styles. Neither person would be dancing in their genre and so everything was going to be new for them tonight. The first set to dance was Magda and Darius. The two had to dance Bollywood and neither of them had been familiar to it. The two tried their best during practice to pick up on choreography and later they tried to use their memory of what they learned as well as their own natural flair for the dramatics to deliver a worthwhile performance. And to that end, they actually did better than they thought they would.

The dance had been lively, on point, and also it was a lot of fun. The audience couldn’t help smiling through the dance and everyone came to love this routine. The judges thought both Magda and Darius had been great during the dance because they did this routine justice like not many others could and so they once again had a very strong showing in front of the judges. After those two had finished their number, the next set had been Chelsea and Evan. They had to tackle a lyrical Hip Hop routine for their first dance and they knew to go in that what they had to first fix was their chemistry. Their chemistry last week had come off as feeling forced. The judges said the partnership had suffered because of that and so did their routines. Neither Chelsea and Evan had been happy with that and so they tried to do better with their Hip Hop number.

They came out tonight and gave a better performance than last time however it still hadn’t been anything to write home about. The judges said the contestants’ chemistry had been in and out, so that took away from the dance because there was never a time when they could just make the routine work for them. The dancers chose to instead fake it when some sort of sincerity would have served them better and so again their routine fell just a little flat. It still looked nice and so all the contestants needed to do was keep working on their partnership. Now, the next set was Hannahlei and Cole. The two were given Stepping and neither of them had worked with that before. They had truly been surprised to find out that was what they got and so they had to work on stepping because it wasn’t like the other dances.

With Stepping, if they made one false move it could easily be heard by everyone! So they had to work on learning how to Step and then learning the routine. This time it had been Hannahlei that picked up the routine first because her cheerleading background had helped and so it had been Cole that struggled. He hadn’t gotten the rhythm or the genre and it was just his good luck that his partner was Hannahlei. Hannahlei had come out as the stronger dancer tonight and she more or less carried this routine. The judges all told Hannahlei this afterward and they advised Cole to keep working at it. They’ve seen how great he was with everything else and so they had no problem with believing he would eventually get Stepping and Hip Hop. The next set tonight was Jay Jay and Jensen. They had to dance Contemporary.

Contemporary wasn’t that far off from Jazz which was what Jay Jay was familiar with and so this routine was harder for Jensen. She had to learn how to fly through the air and thankfully she was halfway there because she already trusted her partner. Jensen and Jay Jay had great chemistry together and it was clear that friendship translated into their dance. The two later gave a stellar performance and the judges had loved everything about it. They loved the chemistry, they loved the choreography, and they loved these two. There weren’t a lot out there like Jay Jay and Jensen who make everything look fun. And so it was great that Slavic and Genessy were next because they kept the energy going.

Slavic and Genessy were given the Jive. It was fast and, at the same time, it was a more choreographed dance than Slavic was used to. He had to remember to point his toes and keep his shoulders back during the dance, but he was a truly great dancer. He picked up the routine easily enough and throughout the dance, he never let Genessy down. She was admittedly stronger during this number and it wasn’t something that was completely obvious. Like sure it was clear to Mary because there were times when Slavic could have straightened out his leg a little bit more and even she was like I barely noticed it because the dance had been so much fun. It was a fun routine. Both Genessy and Slavic had made it look easy and people were still enjoying the great chemistry they had because Slavic was definitely wanting that date. He even said so and so now the ball is in Genessy’s court.

The next duet to dance was once again Magda and Darius. The two were given a Jazz number for their second dance and Mandy Moore gave them a routine worth remembering. It was subtle, sexy, and just outright smooth. The dance was beautiful to watch and everyone couldn’t help loving this routine because of the people that were dancing it. Magda and Darius always had a great time dancing together and that showed. They had fun and so that was something the next duo had yet to master. Chelsea and Evan have struggled both in the past and on tonight’s episode. They hadn’t bothered to dig down deep enough to connect to the routine or to each other and so they constantly tried to work with what they had. And after their first dance, they weren’t doing enough to actually feel the routine.

Their second number was Contemporary. They were choreographed by Travis Wall and he had his own way of doing things. He never just gave the dancers a routine. He worked with them to develop new steps to the dance and it forced these two to finally connect. Chelsea and Evan got to talking and they realized they both wanted to be on Broadway one day. It was this shared dream that opened the door and the routine took them the rest of the way. They had one of their best performances tonight when they danced Contemporary and the judges were finally left happy. They all knew that Chelsea and Evan were capable of great things and so this was the first chance when they felt that belief was validated. The two had connected and it made everyone in the audience feel the dance.

Then came Hannahlei and Cole. They danced Disco for their second number and had fun getting to know each other. They were opposites when it came to cleaning up after themselves and even putting away their clothes though they laughed about it and their great chemistry played into their ability to trust each other. They had to learn Disco and do the spins, so Hannahlei had to trust Cole wouldn’t drop her as he lifts her up in the air and they both spin around. It had been a gamble and it had paid off because the dance had been great. Both dancers had been great onstage and so everyone had been happy to see Cole return to form. He may struggle with other things only he didn’t struggle with the hustle.

Next was Jensen and Jay Jay. The two were given African Jazz for their second number and neither of them had known what to expect. They thought it would be like jazz and it was rather like everything. It was jazz, contemporary, and also some lyrical movement was thrown in. African Jazz was everything as well as its own thing and so Jay Jay had been nervous about it. He hadn’t thought he could pick up the routine during the practice and it turns out, when it mattered, Jay Jay could dance anything. He and Jensen gave another great performance and so the judges ultimately decided that they were the two to beat in this competition. There was nothing they couldn’t do and Jensen had even lifted Jay Jay for this routine – so they had nothing to worry about. The audience and the judges were picking out favorites. And one of their favs were Genessy and Slavic who both started out this competition as underdogs.

They hadn’t been the best dancers and they had still gotten picked because the judges had seen potential in the both of them. Slavic and Genessy knew this and so they strove to prove they do deserve to be in the competition with every dance they manage to execute flawlessly. Their second performance was Broadway and it was a cute story. It was about a boy and girl just falling in love in that innocent way, so the fact that these two made the story so real that everyone had tears was something that only they could have done. Genessy and Slavic worked great together both on and off stage. There was a moment in which Genessy had been overwhelmed last week and Slavic had helped calm her down because he knew that all she needed was a friend. And so these two hadn’t been in danger either.

The audience had voted Cole, Evan, Magda, and Chelsea into the bottom four however the judges decided the only ones they could truly afford to send home was Chelsea and Evan.

Chelsea and Evan were eliminated on tonight’s episode of “SYTYCD”!