BY Sarah Luoma on August 27, 2018 | Comments: Leave Comments
Related : Reality TV, Recap, So You Think You Can Dance, Television, TV 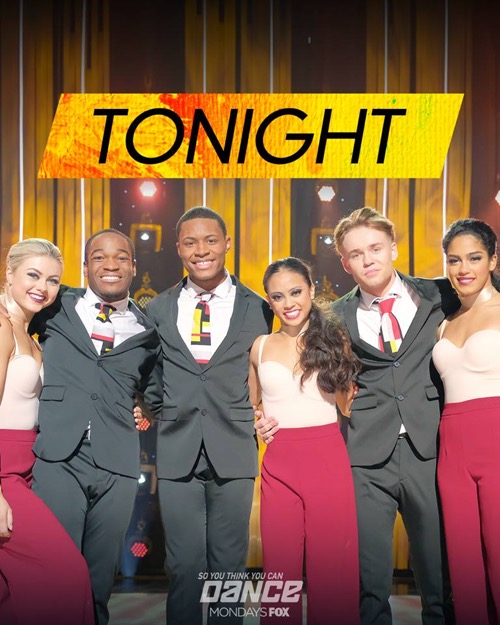 Cat opens the show. The Top 6 take the stage to perform all together one last time with choreography by Mia Michaels. Cat introduces Genessy, Darius, Hannahlei, Jay Jay, Jensen, and Slavik. The Top 6 will hit the floor three more times tonight. Two more dancers will be leaving by the end of the show. Cat introduces the judges: Vanessa Hudgens, Nigel, Twitch, and Mary.

The Top 6 will talk about their inspirations. For Jensen that is her sister Lindsey who was on Dancing With The Stars. This week, Jensen was paired with Kiki. She is a little sick with a cold this week but she is determined to nail the cha cha they have been perfecting.  Mary is so proud of the choreography by Jenna. And she loves seeing Kiki. She also thought Jensen’s footwork was great. She stands and screams! Nigel loved that Jenna softened her in some areas. Jensen is getting better and better. Vanessa loved how she shined and how she leads Kiki a bit. Twitch also thought she was great.

Genessy’s inspiration is her trainer Anthony. He is amazing and has helped her a lot. This week she has been paired with Lex from last season. She talks about feeling like a disappointment this season. She gets emotional. Their piece is all about breaking down the idea of perfect. They take the stage. After their performance, the crowd goes wild. Nigel tells Genessy how remarkable she is. Vanessa’s breath was taken away with the emotion of the dance. Twitch agrees with Vanessa. He is so proud of her. Mary thinks she is beautiful.

Fik-Shun is Slavik’s mentor. He is from a previous season on the show. The two talked online before meeting to dance together. This week, he is working with Ya Ya.

The two take the stage for a hip-hop routine. Twitch thinks Slavik was missing his complete devotion. Mary agrees. He needs to focus on the next dance. Nigel thinks he needs to work on his shoulders.

Hannahlei’s mentor is her trainer Amy. She is so lucky to have her. This week she is working with All-Star Marko. They work on a number of lifts. Hannahlei wants to focus on showing her emotions with this piece. They take the stage. Twitch thinks it was amazing. She is one of the hardest working dancer this season. Mary thought it was wonderful. Nigel thinks she appears so much bigger when she dances. Vanessa thinks she is a powerhouse.

Jay Jay is working with Mandy Moore and All-Star Lauren this week on a jazz piece. Mary thinks Darius was a star. He looked like he was having so much fun. Nigel thought they were brilliant. Darius does the splits over Cat after Nigel dares him. He does it with Cat falling back a bit. Vanessa thought the routine was so much fun. Twitch thinks it was great.

Darius talks about how his mother is his inspiration. This week he is working with Taylor.

Taylor will act as a society in the dance routine while Darius will play the role of someone who resists conforming. They take the stage. Nigel is blown away. He tells Darius he is brave and one of his favorite dancers this season after showcasing his struggles. Vanessa is shaken. Twitch is proud. Mary is tearing up. It was one of the most important pieces she has seen.

Now the dancers will come back to one another. Jay Jay and Jensen will dance Tahitian. Vanessa thinks it was amazing. They just brought the energy. Twitch thought it was crazy. He loves when they dance together. Mary thought it was sharp and well done. Nigel knows it was a workout. They did it well.

Genessy and Slavik will get together again for a sexy salsa. They really want to bring it since they have both had their bad performances. They plan on really showing the sexy side. Twitch thinks Slavik had the steps but he was in his head too much. He needs to let it go. Mary cannot believe all of the choreography Slavik has learned but he needs to fight harder. Mary tells Genessy she is on fire. Nigel agrees Slavik is great and needs to get it out of his head. Vanessa thinks they did great work together.

Hannahlei and Darius pair up together after losing their partners. They need to find chemistry fast. They take the stage. The crowd goes wild. Mary thought it was all about passion. Amazing. Nigel thought as a brand new couple, it was sexy and wonderful. Vanessa is on team Dairlei. It was amazing. Twitch thought it was awesome.

Now for some results, Cat calls Jensen. She has made it into the Top 4. The Top 3 guys take the stage to dance together. Nigel thought that with the little time they had they did a lot with. Vanessa loved all of their own expressions. Twitch thought it was great. Mary agrees, they all did well together.

On to more results, Slavik has made it into the Top 4. He leaves the stage very emotional.

The Top 3 ladies take the stage to perform a hip-hop number. Vanessa thought it was just fine. Twitch loved it. Mary loved all the girl power, the dancing, the costumes and more. Nigel thought they all brought it tonight.

For more results, Cat calls all the contestants back to the stage. Hannahlei has been voted into the Top 4. There is only 1 spot left. The last dancer to make it through is….Genessy. Jay Jay and Darius are going home.