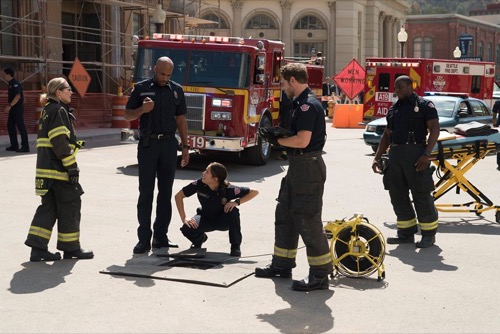 Tonight on ABC Station 19 returns with an all new Thursday, October 11, 2018, season 2 episode 2 premiere called, “Under the Surface” and we have your Station 19 weekly recap below. On tonight’s Station 19 season 2 episode 2 as per the ABC synopsis, “It’s a life-and-death situation when a young boy falls into water pipes beneath the city of Seattle. With the clock ticking, the firefighters of Station 19 jump into action to save his life.”

Tonight’s Station 19 season 2 episode 1 looks like it is going to be great and you won’t want to miss it.   While you’re waiting for our recap make sure to check out all our TV recaps, news, spoilers & more, right here!

A little boy ran away from the Grey Sloane Memorial Hospital on tonight’s all-new episode of “Station 19”.

The kid’s name was Max Forrester. He had gone to his hospital with his mother after she collapsed and he had been anxious to hear about her condition. Max was first taken care by the doctors and they told him what was happening and if his mother needed surgery, but then his father came to the hospital. Evan Forrester didn’t believe anyone should worry his son and as his parent, he kept the doctors from talking to Max about the important things. Like how Natalie Forrester had suffered a mild heart attack several weeks ago and hadn’t noticed. She just went about her day and unfortunately that allowed her condition to worsen. Natalie barely survived surgery and the doctors didn’t believe she would ever wake up from her coma.

Evan heard about everything and thought his son shouldn’t know. The father hadn’t wanted to break the news to Max that his mother was dying and so he forbid the doctors to say anything while also asking said doctors to watch his son. Max was to be kept from his mother until she passed and Evan wanted to be by his wife’s side to end however asking the doctors to take care of Max hadn’t been easy because the kid realized something was happening. He wanted to be told the truth and got angry when no one would say anything. So that’s when he ran off. Max wanted to leave behind his troubles and he thought the only way he could do that was by running away. He left the hospital and security had had to notify the police.

Several officers later caught sight of Max and tried to approach. The kid hadn’t wanted to be found and he tried to run away though he hadn’t seen the drain when he tried to run away. He just started running when BAM! He fell into the drain. Max fell in at an intersection that was rushing with water and the police couldn’t easily reach him. They had to call the fire department and Station 19 was pulled in on this case. They were technically already on it because they had been the ones to take Natalie and Max to the hospital and so they were just following up with Max. No one had heard from him since he fell and they didn’t know which direction he might have gotten pulled along. The new captain had broken the team into pairs and two of the doctors from the hospital had joined them.

Dr. Pierce and Dr. DeLuca blamed themselves for losing the boy. They had asked the fire department if they could help and surprisingly Captain Sullivan was okay with that. The new captain liked to micromanage everything, they constantly had his team running drills, and the only people he liked to see take the initiative were all doctors. Ben wasn’t even allowed to come out on this call because he injured his hands and the captain said that a surgeon’s hands need to be protected. The new captain also had no problem with shooting down any of Andy’s ideas and was fine with DeLuca running around being an EMT for the day. It was like there were a different set of rules for the firefighters and the doctors.

Captain Sullivan bent the rules for one other person. He allowed Evan Forrester to ride in the truck with them and the concerned father wanted to be there when they found his son. He probably thought they would just go in and grab him, but there was a problem. The rushing water made it dangerous for anyone to go down there unless they had been harnessed and so the captain ordered Maya to get ready. She was supposed to go down there and she was fixing her harness when she realized her oxygen mask wasn’t working. It would have taken Maya two seconds to fix it and so Andy not waiting was really on her. Andy jumped in without a harness and she tried to reach Max and couldn’t.

Max got swept away before long and the team had needed to rescue Andy. Andy took a risk and it hadn’t paid off for her. Yet no one had been angrier than Captain Sullivan. He blamed Andy for jeopardizing the child’s life and didn’t have her do anything besides drive the rig as they tried to track down Max again. They later found him a few blocks over and they had been told that was their last chance to grab Max. He was down a drain was the too small for an adult to go down and so they needed to convince him to grab the floaty they sent him. Max had been scared to let go and grab the floaty. He thought that he would miss it and so they called in his dad to talk to him. Evan tried pleading with him and, when that hadn’t worked, Andy told Evan to be honest with Max.

Max knew that his dad had been lying to him and so when Evan finally admitted that Natalie Forrester was dying – Max decided to trust his father. Evan said grab the floaty and Max had been able to get in time though not everything was okay. Max was treated for the water he swallowed and he returned to the hospital to say goodbye to his mother. He and his father had been able to do that together while Station 19 packed it in for the day. They went back to their place believing that everything was okay and it wasn’t because Andy almost cost them everything out in the field. She hadn’t wanted to trust Maya for the job and had taken risks that came back to bite her. Her friend was angry with her and her captain reminded her that she has done nothing to earn any sort of goodwill from him.

It seems she just expected everything to carry on as normal and her captain was the one to inform her that things were different now!