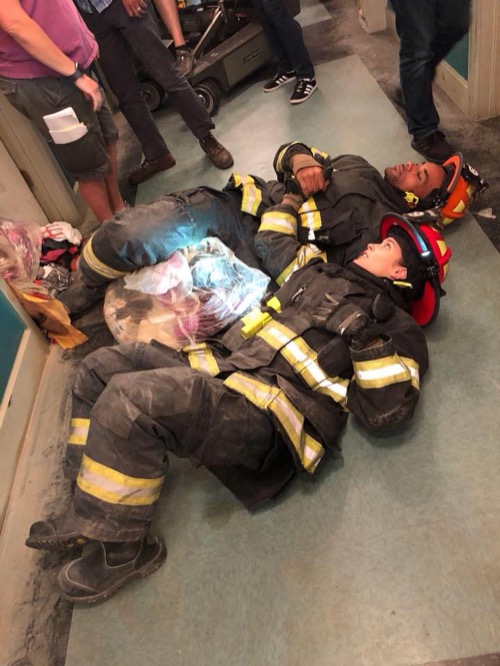 When they arrive to evaluate the scene, they’re shocked by what they find inside. Meanwhile, in an effort to create a solid working relationship between the fire and police departments, Ryan takes an unlikely member of the team on a ride-along.”

Tonight’s Station 19 season 2 episode 3 looks like it is going to be great and you won’t want to miss it.   While you’re waiting for our recap make sure to check out all our TV recaps, news, spoilers & more, right here!

Andy had moved in with Maya on tonight’s all new episode of “Station 19”. She knew that if she stayed with her father that he would keep treating her like a kid and so Andy decided to move out, but there weren’t a lot of places she could afford and so she took Maya’s offer to move in with her. Maya had had plenty of space. Perhaps too much space because Andy found the place bare and sort of threw herself into decorating. She putting things away on the shelves when Vic let herself in and both Andy and Maya found out she had a key. Vic had keys made when she house-sat the one time and so not only was she letting herself in she was also super excited about girl talk. She informed them she had to come over because she slept with David from Station 23.

It hadn’t been planned or anything. They just went out for drinks and then ended up spending the night together. Vic had been super happy about getting some and Andy had tried to tease her about it yet Andy wasn’t really good at being easy or breezy. She was a bundle of nerves and Vic had tried to tell her that. Only Andy thought she could be calm for the rest of the day. The ladies had gone into work and they had been talking about the new captain when the new captain came up behind them. Captain Sullivan informed them that there weren’t enough women to fill in the captaincy and that the woman that had been earmarked to take over Station 19 had proved herself to be incompetent. And so Sullivan thanked Andy for handing him his new job.

Sullivan walked away after that though what he said had stayed with Andy and she began to believe he was out to get her. Andy said he was always lurking up behind them to catch them out and, well, Maya didn’t agree with her. Maya said if she didn’t want Sullivan to keep treating her like the enemy then maybe she should stop handing him ammunition. Sullivan had only ever gone after Andy when she said or did something she shouldn’t have. So Maya had a point! It wasn’t anyone else’s fault and so Andy had quickly lost her newfound outlook to be easy breezy. She had been upset that she kept feeling like a fool in front of the new captain and so she hated that her friend hadn’t backed her up. She thought Maya would always be on her side and Maya was getting tired of being her sidekick.

Maya was her own person. She had gotten shafted in taking Andy’s side in whichever situation Andy found herself in and as time went on it became annoying for Maya. Maya had been offered the chance to become a lieutenant and she had turned down because she hadn’t wanted to compete with her friend yet Captain Sullivan later brought up that promotion again with her. Maya could go very far in the Seattle Fire Department and the captain said she should trying to hide her light. The Station later got a call about a home check. They were informed that an elderly woman hadn’t been seen in days and no one was sure if she was still alive. The whole Station house minus one had gone to the apartment building and they had tried breaking down the door to the apartment.

They hadn’t been able to get very far because the door had been blocked from fully opening. The apartment had been jam-packed with stuff and so they tried calling out to their victim. She did answer them when they called and she told them how she couldn’t move. There had been a couple of boxes that fell on top of her and she recently had heart surgery, so the firemen knew they had to get to this elderly women only they didn’t know. The place was so full that was it was making groaning sounds that indicated everyone that lived below her could was at risk and so the captain had a call to make. He had to either send in someone or wait for engineering support and Andy thought he should wait for support while Maya said that the captain should send in Andy.

Andy was the lightest of anyone else’s on the team and she was familiar with navigating tight spaces. Maya thought Andy was the best person to treat their victim and the captain agreed with her. He sent in Andy and Andy found out the damage had been a lot worse than she thought. She had stumbled and fallen although she was thankfully able to get back up and so she saw to their elderly lady. The poor woman had been close to death by time Andy found her and Ben had had to talk her through performing a small procedure to save the woman’s life. And by time Andy had gotten her out of there, it had been just few seconds from the floor giving way. And so Maya had been right when she hadn’t sided with Andy because Andy’s plan would have caused the woman to die.

As for the one person that had gone out on the call, Jack had forced into doing a ride along with Ryan and the firefighter had learned something by watch Ryan at work. The cop may not be his favorite person and their shared past with Andy made things awkward however watching Ryan save a young girl from being kidnapped by her father had at least given them a reason to respect each other. They were both just trying to do their best and Jack knew that he needed to let up on the jokes he made at Ryan’s expense. And guys ultimately went out for beers.

The guys had found common cause and so they weren’t like Vic and Montgomery. Montgomery was officially back on duty and he wondered why his best friend no longer wanted to talk to him or even tell him about the guy she was seeing. So Vic revealed that she hadn’t forgiven Montgomery for telling Ben to leave behind.

The fact he had come close to dying is something she was now blaming him for.