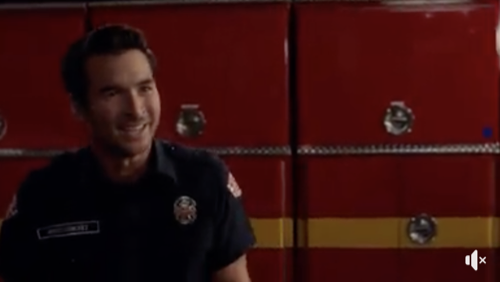 Tonight on ABC Station 19 returns with an all new Thursday, October 25, 2018, season 2 episode 4 called, “Lost and Found” and we have your Station 19 recap below. On tonight’s Station 19 season 2 episode 4 as per the ABC synopsis, “Sullivan assigns each member of the crew a specialty skill to learn. During a house call, Ryan is caught off guard when he comes face-to-face with someone from his past; and Sullivan, Andy and Maya handle a structure fire in a derelict building.”

Tonight’s Station 19 season 2 episode 3 looks like it is going to be great and you won’t want to miss it.   While you’re waiting for our recap make sure to check out all our TV recaps, news, spoilers & more, right here!

Unfortunately, Dean’s houseboat has become the go-to hangout spot on tonight’s all new episode of “Station 19”.

Dean was a private person. He hadn’t told anyone where he lived because he knew they would come over and so he had to be tricked into revealing his secrets. Dean was found out by Jack and Jack then told everyone else, but people like Vic would kayak over to his home with bagels for breakfast and that’s how Dean was learning that Jack was inviting people to Dean’s home. His houseboat had become refuge for Jack who hadn’t wanted to spend time alone and whether that was because of his breakup with Andy was anyone’s guess. What seemed clear was that Jack didn’t want to go back to his own apartment and so he was staying for longer periods of time at Dean’s. And inviting people over Dean’s was just beginning to concern Dean.

Dean tried to talk to Vic about it and she wasn’t much help. She had started talking about going out with Maya and Andy though she soon realized that bringing up how Andy had met someone at the bar might be a little too tactless around Jack. Jack had claimed he was fine and so that shut up Vic. Only she later asked Andy about it back at the firehouse and it turns out Andy had given this Brad guy her number. It was a really big step for her and she had been hoping to hear from him. She just didn’t realized that she actually gave him her old house number. Brad ended up calling her dad Pruitt and Pruitt had demanded to find out who this Brad was as well as why he was calling the house for Andy.

It was a simple mistake. Andy didn’t even realize what had happened as she was talking to her friends and it wasn’t before long when they were called in by the captain to line-up. The captain said that he wanted to push the squad. He thought if they were all reassigned to different areas that they could pick up tricks and so he gave them each a different job. The captain assigned Bishop more duties that were in line for her moving up in rank and at the same he downgraded Andy. Andy was put on recruitment and she hated it. She was someone that liked the action and the captain assured her that she would be great at her new job. The station later received a call about an ongoing fire and Captain Sullivan decided to give the leadership to Maya.

Maya got to make each and every decision on this one call because Sullivan wanted to see how well she was in the field. She had heard the same reports that he did about this fire being at abandoned warehouse and she advocated for sending no one in. Maya thought they could just stay outside and drown the fire, but their intel had been wrong. The whole station was at this fire when Jack and Dean took a walk around the building to make sure it was secure when Jack noticed that there was a thrown-together security system in place. It was a bunch of cans on a string and it would make a sound if anyone tried to open the door and so right away Jack realized that there were squatters inside. He called it in to the captain and that’s when a couple of kids started to leave the building.

The kids were the squatters. Two of them came out first and then one of them snuck back inside because she told the firemen that she could show them the way. The firefighters had to wait for word from their captain and Maya had cleared them to go in. She also had to send in a second team when the building proved too vast. It was like a maze inside and the kids were all throughout the building. They were sleeping and that girl Zoe said that’s why she had to show them the way. Andy had tried several times to get Zoe to leave the building and just when she was about to force the matter – Zoe ran off. She said there was a sprinkler system and that she could help them turn it on. Zoe had started turning the pipe on and hadn’t been strong enough. And so Andy took over, and she was turning it on when Ben realized that the pipes were corrupted.

There was some chemical in the pipes and it enflamed the whole area on the ground. Ben and Dean tried to Andy before she turned on the pipes and it had come in too late. She turned them on and the whole place went up in chemical fire. They were able to turn back off again before it got too bad yet the fire damage had left both teams trapped inside. There had been a moment when Montgomery froze and he quickly got over to treat it the kids. The kids had breathing problems and everyone needed to be rescued. So Sullivan wanted to know what Maya’s plan when he still found her at the hose. She was trying to work that out and because she got stuck on getting one little thing right she had no other plan for what else to do. And so Sullivan took back control of the scene.

Sullivan arranged things to get his people trapped inside out and he squashed the fire. He also saw how Andy cared about the people they saved and so he told her that’s why he put her in recruitment. He said she was passionate about this job and that it was contagious. Andy even saw his point because she may have convinced Zoe to become a firefighter one day and so she made her first recruit without trying. She tried to cheer up Maya and Maya wasn’t having it because she wanted to be ready now however it seems like she some more experienced. Vic had seen how Maya snapped and she hadn’t pushed because that wasn’t her way. Except she went to the therapy sessions for firefighters and she ran into her own problem.

Vic ran into Montgomery and, without talking to each other much, they were able to just be there for each other. They ran into other people they knew and it made therapy seem like it wasn’t a big deal. Vic and Montgomery had needed a safe place to be able to face their fears, but it wasn’t until Dean had seen Jack with the kids at the building that he realized that what’s his houseboat was. It was a safe place for Jack and Jack opened up to him about being raised in the system. The guys talked and a punch was thrown which was pretty harmless because that’s how they communicate to each other.

Andy meanwhile had gone over to her dad’s because she figured out she handed over the wrong number and as luck would have Brad called her right after she agreed with Ryan that they should talk sometime soon.

It was an awkward moment and Ryan had already been through a bad day, which he spent with his dad the returning con artist. And so finding out his dream girl was moving on made things worse…