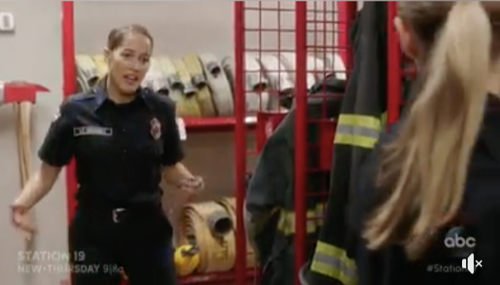 Tonight on ABC Station 19 returns with an all new Thursday, November 08, 2018, season 2 episode 6 called, “Last Day on Earth” and we have your Station 19 recap below. On tonight’s Station 19 season 2 episode 6 as per the ABC synopsis, “Just when Ryan agrees to talk it out with his dad, Greg Tanner makes an unexpected visit to Station 19, leaving Ryan and others confused. In an effort to connect with his crew, Capt. Sullivan enlists the help of an unlikely source for some bonding tips.”

Tonight’s Station 19 season 2 episode 6 looks like it is going to be great and you won’t want to miss it.   While you’re waiting for our recap make sure to check out all our TV recaps, news, spoilers & more, right here!

Ryan and Andy’s relationship has improved since his father came back to town. The two were talking and Ryan even asked Andy to be his emotional support when he agreed to meet with his dad. His dad has always been a flake. He was never around and he was up to something when he did come in town however Ryan thought this time would be different and in case he was wrong he wanted Andy to be there for him. Ryan and Andy had gone to the café and they had waited for his dad to show. Only he never did and so that had been that for Ryan. He didn’t wait around for a man that couldn’t even be there on time. Ryan told Andy that he was fine with what happened and that he won’t give his father another chance to disappoint him.

Andy tried to understand where he was coming from only she couldn’t have. She didn’t know what it was like to have a father like Ryan’s and hers was at least man enough to tell her what he thought to her face, but Andy eventually let the Ryan situation go because she was too frightened about what she could expect at work. Andy had yelled at their new captain. Captain Sullivan was grieving over the loss of his wife and he hadn’t told anyone why he was acting out of character or that it was the anniversary of her death. He just wanted to be an ass that day and so he was. Sullivan tore into Maya for no reason and that’s why Andy got into his face. He wasn’t going to be allowed to hurt her best friend on her watch and so she stood up for Maya.

Andy went as far as going off on the captain and she wondered afterwards if he was going to hold that one encounter against her. She talked about it with her friends and ignored the looks they were giving each other because she thought maybe it was going to be as bad as they were making it out to be yet she was instantly on alert when Sullivan asked to see her in his office. He had no sooner brought up what happened that the Station was called out to an emergency and so Andy thought she was safe. She went on the call and she came back to tease Ben who was busy washing up the truck, so she was in a pretty good mood when she noticed that her father was there. Pruitt got called in by the captain and he thought the worse.

Pruitt was scared that he was being pushed out and so he thought Sullivan called him in to tell him that he needed to be fired. He was so scared of this happening that he worked up Andy and it looked like she wanted to go with him into Sullivan’s office, but Sullivan just needed one Herrera and it wasn’t because he was going to push Pruitt out. He was actually advised to turn to Pruitt for help. Sullivan needed to know how to connect to his team and so the Fire Chief suggested he talk to Pruitt. Pruitt was the old captain and he knew the station better the anybody else. He was also happy to help and therefore he was willing to talk to Sullivan about what he needed to do. And that’s where Pruitt was when an old friend came in.

Ryan’s dad Greg Tanner came to the station. He came in looking for Pruitt because he wanted someone to patch him up. Greg had gotten beaten up and he said that’s why he didn’t meet Ryan at the café. He said that he was knocked out and that his phone was ruined in the struggle. Greg was bleeding everywhere so Andy saw to him and she called Ryan. Ryan came down to the station and took one look at his dad before he asked what really happened. He didn’t believe his father’s story. He thought it was another lie to get out of trouble and so he demanded to know what actually happened or he was going to assume that Greg did the damage to himself. It would be convenient excuse for why he hadn’t showed and so Ryan didn’t really think much of his father.

Pruitt even felt the same. He came out of Sullivan’s office to see Greg and when Greg told him he came looking for Pruitt for one of their old patch ups – Pruitt looked less than impressed. He also asked about the gardening tools that Greg borrowed and never returned. Greg claimed they were in the shed and Ryan shot that down because he knew his father was lying again. His father lived to lie. Its why no one trusted him. Greg had yelled at Ryan because he said he didn’t like to be accused and so Pruitt took Ryan out of the room while Andy answered another call. She was gone for hours and by time she came back she still found Greg on the couch. Greg continued to play ‘woe is me” and Andy had had enough.

Andy told Greg he wasn’t much of a father. She shot him down as a father and as a man because everytime he blows into town he follows a pattern. He plays mind games, overstays his welcome, and then leave people worst off than before. Greg did this countless times to Ryan and Andy believes that’s why Ryan has such a hard time trusting people. He worries about being letdown before it could happen and Andy would have gone on to say more if Ryan hadn’t walked into the room. He heard Andy’s assessment of him and he began to ask if that’s what she really thought of him, but she got another call and so she left Ryan to his father. The two argued back and forth until Greg finally answered.

Greg got into some trouble in Florida. He may or may not be on the run and he told Ryan this using vague language because he hadn’t wanted to technically confess to a crime to his cop son however he was running from something and that’s why he came back to town. He wanted to see Ryan and his mother before whatever he was running form caught up to him. Greg told Ryan he was proud of him and that had been the last thing Greg said prior to passing out. He was unconscious on the floor when Andy came back and tried to revive him. Greg’s condition was more worse off than he let on and he wasn’t the only one hiding. Ben has been pretending that’s everything is ok and it wasn’t because his wife kicked him.

Ben’s wife Bailey had needed time to adjust to his new job. He was once a surgeon and he had been safe in that position though now as a firefighter he was out there taking risks and it made Bailey worried about losing him. She thought the only way to protect herself was to push him away and so she asked for a break. And Ben didn’t take it well. He’s deeply in love with his wife and he wants to go home. He also didn’t want to think about what might happen if he and Bailey never made up, so he threw himself into his work and no one noticed until he admitted that he was running all the time to escape from his thoughts. His friends wanted to know if he was alright and he explained to him how he’s been sleeping at the firehouse because there was no home to go to. And they just hugged him until he cried it out.

Ben was eventually honest with his friends and Greg was revived yet Jack never explained to anyone why he wasn’t sleeping and how he’s been suffering from PTSD since he almost died in that building fire.

Jack chose to live in the shadows and he dismissed anytime anyone was concerned.

Only Andy got around to talking to Sullivan and they both agreed to being in slightly in the wrong. They even said they needed to get to know each other and so they agreed to meet over coffee.