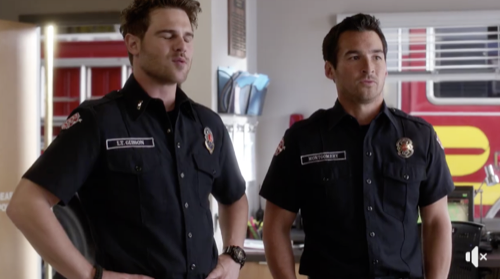 Tonight on ABC Station 19 returns with an all new Thursday, April 12, 2018, season 1 episode 5 called, “Shock to the System” and we have your Station 19 weekly recap below. On tonight’s Station 19 episode as per the ABC synopsis, “Miranda Bailey visits Ben at work, meeting his new co-workers for the first time. While most of the team responds to a motor vehicle accident involving an electrical danger, Andy and Maya are paired up to go on their first stakeout.”

Tonight’s Station 19 season 1 episode 5 looks like it is going to be great and you won’t want to miss it.   While you’re waiting for our recap make sure to check out all our TV recaps, news, spoilers & more, right here!

Ben’s love life has picked up some. Ben has been gaining a lot of muscle since he put down the scalpel and started carrying around firemen equipment, so he’s been noticing how his wife loved to see him when he got home from work. She was either flirty or feeling him up however he liked to point out that it was a lot of hard work to look that good. He was married to Dr. Miranda Bailey and so she was used to going head to head with him. He would just try to make his case by telling her things that she hadn’t wanted to know on tonight all-new episode of “Station 19”.

Ben work tells her what he did that day and she wouldn’t be able to handle it. Baily understood what he did and so her problem with it was being reminded of how dangerous it was. She hadn’t liked hearing about what could happen and so Ben tried to make it easier for her by bringing her to work with him, but things at the station were a little tense. They’ve been tense ever since Pruitt had found out about his daughter and Jack. The two were both up for captain and Pruitt would never have put either in that position if he knew they were in a relationship.

Andy had tried to tell her dad that she had ended it with Jack and that he had actually walked in on them ending it though Pruitt hadn’t been fine with the two stopping at ending it. He also believed the rest of the station deserved to know the truth and threatened to say something if they didn’t. So that got under both Andy and Jack’s skin. They hadn’t wanted to tell their team what’s been going on and they hated it so much that they were horrible to everyone. Everyone had gotten their head bit off for some reason or another and they had tried to make a guess about what was wrong.

They talked amongst themselves and thought that maybe Pruitt had recommended Andy as captain and that Jack hadn’t been able to handle it yet Ben had still tried to make Bailey’s tour of the station worthwhile and so he tried to cover for any awkwardness. He had introduced his wife to everyone and it turns out she already knew Pruitt. Pruitt was a patient of hers and she had been a little concerned about him. She had waited until the others had to respond to a call to talk to Pruitt and it seems she had warned him about returning to work.

Pruitt had been told that if he didn’t take things easy that could die and he had chosen to ignore that warning. He thought if he could take easy at work that it could be ok and so Bailey told him that he had been wrong. She reminded him that she said he had to stay at home. Bailey would have gone to add more words, but the station had arrived and so she had tried to finish the tour. She was discussing with the others about what they did and Ben was hoping that could help when he was called to another issue.

Ben hated leaving Bailey again and so he had asked her to stay because he swore he’d be right back however Bailey had had enough time to take Pruitt to task again. He was still arguing with his doctor about his best form of treatment and the two were going back and forth when a pregnant woman needed them. She had gone to the station because she needed them to install car seats for the triplets she was expecting and unfortunately she began feeling lightheaded. The doctor and the paramedic had asked her to sit down while they checked her out and Pruitt took the lead.

Pruitt had said it was his station and so that’s why Bailey allowed him to take the lead though she naturally hadn’t liked it and she wondered if her husband was ever going to come back. Ben meanwhile had responded to some down power lines. The power lines were being repaired when they snapped and trapped a man inside his car. The guy trapped said his name was Marshall and it had been Ben’s job to keep him calm. He started talking to Marshall and he waited for the go-ahead from Jack to help Marshall leave his car.

Marshall was told to hop out of his car like a bunny. He had taken careful hops and was advised to make them small, but Marshall had accidentally tripped and fell on the ground while it was still electrified. He was trapped out there on his own and Ben wanted to go to him, but couldn’t. He had to wait until the power was turned off and by then it had been to late. He had rushed out to Marshall’s side only to see that the man was bleeding internally and needed to be taken to the hospital immediately. And Marshall wasn’t in a stable enough condition to be moved.

Ben could see that Marshall was going to die and so he allowed Marshall to call his wife. His wife as it turns out was the same woman that come into their station to have car seats installed and so she was still there when she talked to her husband. She was telling him how great the firemen were to her and he had agreed with her yet he also said that he loved her and had gotten the chance to hear her say it back before he died. He hadn’t told her that he was injured and so she hadn’t known what was wrong until much later.

It had been such a bad day for everyone that no one had been willing to hear the announcement that Andy and Jack used to be a thing however they had all been reassured when they were told it was over. Ben had gone home and hadn’t told his wife that he lost someone on the job while Andy decided to pursue things with Ryan. She had gone out on a call and had seen Ryan in action, so she had been impressed and she knew he was a great guy the moment she found out what he did for Bishop’s brother.

So Andy went to Ryan’s house and knocked on his door, but she fled before he could answer it and so she was ready to move just not sure how to go about it.