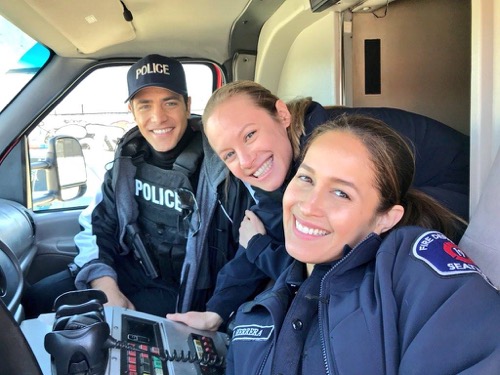 Tonight on ABC Station 19 returns with an all new Thursday, April 19, 2018, season 1 episode 6 called, “Stronger Together” and we have your Station 19 weekly recap below. On tonight’s Station 19 episode as per the ABC synopsis, “Andy, Jack and 18 other candidates take the captaincy drill test, gunning for one spot as captain of Station 19. Meanwhile, Travis is serving as acting captain while Andy and Jack are away for the day; and Ben confronts Vic about her fears.”

Tonight’s Station 19 season 1 episode 6 looks like it is going to be great and you won’t want to miss it.   While you’re waiting for our recap make sure to check out all our TV recaps, news, spoilers & more, right here!

Andy is telling Maya in the kitchen how she ran from Ryan’s front porch. Pruitt comes in. he reminds Andy her big test is today. The doorbell rings. Andy sees Ryan and not Jack who she is supposed to be riding with to the test. He has brought her a good luck charm. Jack shows up. Things are uncomfortable.

Travis is in charge at the station while Jack and Andy are away. He has pressed his uniform. He hands out chores for everyone. Meanwhile, Jack is giving Andy the silent treatment in the car. He thinks they need to give one another some space. When they show up for testing there are dozens of people. They must get into the building for their test, extinguish the flames and carry out a 200-pound dummy.

Dean answers the phone. He sees Pruitt bending over coughing. He asks him if he is all right. Maybe he should go home. Pruitt ignores him and takes the phone.

Andy and Jack end up on the same team with two other people, a macho man and a woman. They begin their challenge by heading into a burning building together. While passing through the flames, the macho man tells Andy to stay back. He doesn’t want her to get hurt. He and Jack move forward.

Ben tries to talk to Victoria about her fear of fire. They get a call and head out. On the scene, Victoria sees a young girl on the road. She is down on her legs with a truck headed towards her. Victoria jumps in front of her and guards her. The truck swerves.

On their next run through the building with their teammate Charlotte in the lead, Andy locates the dummy. She is encircled by fire. Jack and the others finally make it to her and put out the flames. Charlotte is dangerous. Andy confronts her outside. She laughs at her. She calls Andy adorable after Andy tells her she has been helping her father run the station for a long time.

Maya and Victoria work to free the girl from the pothole she is stuck in. She tells them she was headed to tell her female friend she doesn’t want her to move. She thinks she is in love with her. Victoria and Maya give her advice.

It is Jack’s turn to lead the team. He gets nervous when they don’t find the dummy. He pulls Andy to the side. She tells him she will follow his lead. Outside, Jack tells the Chief he has no dummy. The chief congratulates him. There wasn’t a dummy in there.

While the young girl is stuck and being worked, on her friend comes running to her. They talk. She admits she cares for her. They kiss. The team is running out of time. They pull her out when her blood pressure drops.

It is Andy’s turn to lead the crew. They crawl through a smoke-filled room. The ceiling collapses and takes out the macho man, Cole. They radio for the aid car. Andy refuses to leave. She needs to get the dummy. Jack stays with her. They get the dummy and come out. Andy is reprimanded for staying in the building.

Pruitt says goodnight to Dean and asks him not to tell anyone about earlier.

The crew sits for dinner. They talk about their day. Victoria blurts out that she thinks she is afraid of fire. She is afraid to admit it that when they arrive at a scene she wants to run in the opposite direction. Travis cannot believe this has been going on. Victoria tells them all she will tell Andy and Jack when they get back. They stop her. They will all do their part to get her through this.

Ryan is waiting for Andy when she gets home. He asks to stay but Andy tells him she needs her dad. She heads into the house. Meanwhile, Pruitt is at the hospital to see Miranda.