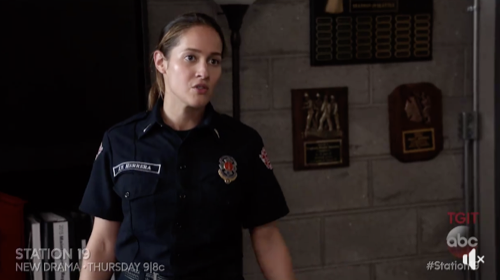 Tonight on ABC Station 19 returns with an all new Thursday, March 22, 2018, season 1 episode 4 called, “Reignited” and we have your Station 19 weekly recap below. On tonight’s Station 19 episode as per the ABC synopsis, “Andy and Jack disagree over spending decisions at the station. Meanwhile, the firefighters respond to a structure fire at a brand-new bed-and-breakfast; and Ryan calls Maya when he finds her brother in some trouble.”

Tonight’s Station 19 season 1 episode 4 looks like it is going to be great and you won’t want to miss it.   While you’re waiting for our recap make sure to check out all our TV recaps, news, spoilers & more, right here!

Two sisters fight as one of them starts the gas stove. Meanwhile, at Station 19 Andy is mad at Jack for spending budget money on boots and a steak dinner. The team listens outside the office. He knows she has a bigger hill to climb because of Frankel. They kiss.

The chief shows up. He wants to know what the guys are talking about. It sounds period. He walks off after it is revealed that Miller is talking about getting laid.

Andy and Jack get dressed quick and plot how they will leave the room individually. They decide they will talk later.

At the grocery store, the team picks out what they need for the station. They get a call and run to the truck quickly. They arrive at a little bed and breakfast. The sisters are out front, still arguing. They just renovated and they don’t want the team to use water. A car comes down the road and runs over the hose. They need to run a new line. Inside, Andy and the team cautiously walk in the kitchen. It is a tiny fire. They cannot believe they showed up for this.

Back at the firehouse, Jack and Andy fight all the way to the office and slam the door. Inside they kiss and laugh.

Maya gets called down to the station. She identifies her brother in a cell sleeping. Ryan recognized him. She tells him that her brother isn’t homeless. She thinks she can help him. Ryan tells her to leave him here and get back to the station for now.

On a cal back to the inn, Andy and Maya talk. Maya wants to know if Andy wants to tell her anything. She smiles. They arrive at the scene. There is smoke everywhere. One of the sisters is in the house. A fire erupts. Warren sees Vic, she is panicking and not talking when he calls her name.

Andy runs in and finds the sister. Her leg is injured as she lay on the floor. The heat is causing bottles of wine to smash and erupt. They use a serving platter to make their way by the wine rack. They realize the sister inhaled some glass. They drag her out and lay her on the lawn. Maya works to incubate her. She finally comes to and starts breathing.

Maya sits and talks to Ryan. She tells him how her brother got left behind. Her parents focused on her too much. He overdosed the day she won an Olympic Gold Medal. Ryan offers to keep an eye on him during his patrol.

Warner talks to Vic. He can help her through her issues, whatever they are. She gets angry. She doesn’t have any issues.

Travis visits the nursing home again and talks to the older women’s grandson. She is okay with him talking about her medical issues. She is ready to face them.

Andy and Jack meet behind close doors. Jack tells her that their current situation doesn’t make him happy. He had a ring for her. She tells him she likes what they have now. She isn’t ready for that yet with him or anyone. She is happy with the station. She starts to undress him. Her father comes out of nowhere.