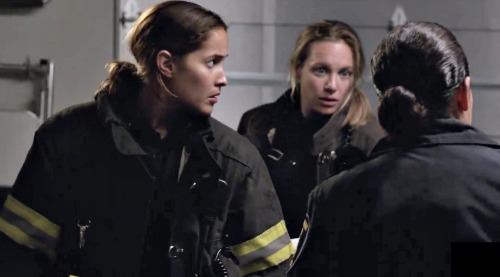 Tonight on ABC Station 19 returns with an all new Thursday, May 17, 2018, season 1 episode 10 called, “Not Your Hero” and we have your Station 19 weekly recap below. On tonight’s Station 19 episode 10 as per the ABC synopsis, “In the final days before the Station 19 captaincy is announced, Pruitt warns Andy not to be disappointed with the outcome of the race. Meanwhile, Ben gets upset with Pruitt for having told Bailey the dangers of firefighting; and the team gets trapped inside the garage of a burning house, putting several lives at risk.”

Tonight’s Station 19 season 1 episode 10 looks like it is going to be great and you won’t want to miss it.   While you’re waiting for our recap make sure to check out all our TV recaps, news, spoilers & more, right here!

Andy wakes up on the couch after a night of partying. She sees Maya escorting Dearborn out of her apartment after a one night stand. Andy cannot believe Maya hooked up with her after how she treated Andy at the incinerator challenge. Maya tells her she is crashing on her couch.

At the station, Maya and Victoria tell Andy to be optimistic about her chances as captain. Pruitt sits by and doesn’t say anything. Travis feels weird that Grant is at the station making plans to hang with some of the team. Ben shows up at work with Miranda. The team has a whole spread set up in celebration of Ben’s 50 fire mark. They give him a set of keys to the aid car. Andy leaves the party. Pruitt follows. She is mad that he doesn’t believe in her or Jack. He is sorry she is hurt.

Andy and Jack wait to meet with Ripley. There is a skyscraper fire he needs to get to so he needs to postpone. Jack tells Andy if he doesn’t get captain he is putting in for a transfer. He needs a fresh start.

Andy calls a group meeting in the barn. They pull out a bunch of extra hoses and check them in preparation for the skyscraper fire that they think they will be called too. Maya wants to be called bad. The girls sit and watch the news while they wait. Travis and Ben talk about Travis’ hesitation with Grant. They get the call. Everyone gets on their gear and in the trucks.

They meet with Ripley on level 22 to get an update. Dearborn is there. They get to the fire. There is a lot of debris falling. Dearborn jumps in. Andy radios her. She doesn’t respond. Jack tells her not to go but Andy goes. She makes it through the flames and finds Dearborn. She is on the floor stuck under some debris. Andy puts out the fire coming towards them. Jack makes it to her. They free Dearborn. Ben works on an injured man who is upset he is late to pick up his kid. Ben tells him that things could have been worse. He makes the man smile. Vic and Maya check the floor below for danger.

Dean admits to Jack while they put out fires that he screwed up on their last fire when they were trapped in the garage. He didn’t put his radio to the right channel. It was all of his fault. They come upon a massive load of combustible materials. They call for a complete evacuation.

Ripley starts calling for an evacuation. Pruitt calls Ryan. He is having trouble breathing and wants to know if he can come and get him. He doesn’t want Andy to know. Maya and Vic are arguing with a man who wants to leave the building now as they try to organize an evacuation down the stairs. Everyone pauses when they hear creaking. They look outside. The fire is jumping floors. Glass blows everywhere.

Ben sees Travis down on the ground. He has a shard of glass sticking out of his chest. Ben calls for help. The radio isn’t working. Ben drags Travis to the stairs. Ripley and Andy work to get the equipment out of the building. She is impressed he is still in the building. He is impressed by her too.

Miranda shows up to see Pruitt. He pushes his appointment until late. Ryan shows up at the same time. They find Pruitt barely breathing on the floor with no pulse. Dean and Jack find a man on the floor inside a closet. They call for help. Ripley tells them he and Andy are in the elevator on their way down. They need to leave the man and get out. Andy fights Ripley and changes the direction of the elevator. She isn’t leaving the man behind.

Dean gets on the elevator with the man but Jack stays behind. Andy begs him to get out. But he isn’t leaving. He needs to close more doors and save the rest of the team. Andy cries. He tells her he has no regrets with her. He leaves. She shuts the elevator shaft and heads to the stairs. She radios him but it is static. There is an explosion.