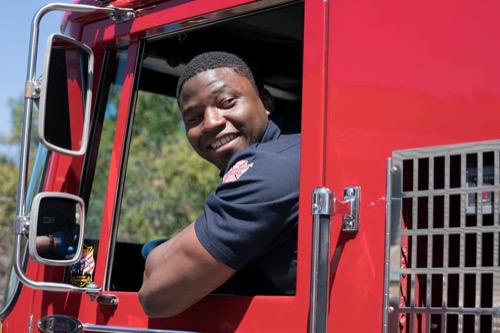 Tonight on ABC Station 19 returns with an all new Thursday, April 26, 2018, season 1 episode 8 called, “Every Second Counts” and we have your Station 19 weekly recap below. On tonight’s Station 19 episode 7 as per the ABC synopsis, “Ripley interviews each member of the Station 19 crew to determine whether Andy or Jack should be given the role of captain. Meanwhile, a mom’s day out on a party bus takes a turn for the worst; and Captain Pruitt continues his treatment.”

Tonight’s Station 19 season 1 episode 8 looks like it is going to be great and you won’t want to miss it.   While you’re waiting for our recap make sure to check out all our TV recaps, news, spoilers & more, right here!

Andy wakes up to next to Ryan. Dean wakes up to his new girlfriend. Meanwhile, Pruitt is being hooked up to his chemo. He is mad that he is missing Andy’s peer review. Ripley shows up to talk to the crew of Station 19. Ben is first up. He wants to know what happened this morning.

Dean has shown up to work with a hangover. His girlfriend JJ comes back and into the back. Jack is annoyed. She shouldn’t be in their private area. They sit for breakfast. They get a call. A man injured himself after he tried to back out of a parking spot. He has neck and back pain. After they help him they head back to the station. On their way, they see multiple car accidents. They have a man in the aid car. Andy decides that he can wait so they can deal with the new victims. Jack disagrees. Several women are strewn across the road injured. They have one woman stuck under the bus.

Victoria is in for her peer review. She gives her side of the story involving the party bus crash. Jack is in the aid car with Jack watching him. Ben cuts a piece of metal that a woman is impaled on. It is coming through her shoulder. Victoria calls to Station 23. She tells Ripley she is angry that the other station took 8 minutes to get there. That is his problem. He needs to worry about them not Jack and Andy. He needs to just pick one of them and be done.

Travis arrives for his peer review.

Travis tells Ripley how they freed the woman impaled. Next, they extract the woman who was stuck under the bus. She loses consciousness. Her heart rate plummets. They work on her and bring her back. Station 23 arrives. Their car accident in the back of the aid car is bleeding from his hand. Jack is mad that they haven’t brought him to the hospital yet. Travis tells Ripley he lost his husband because of a miscalculating captain. He needs to make sure that doesn’t happen again.

Pruitt is still at chemo talking to his nurse. He talks about Andy’s love of the station and her stubbornness. Maya is in her peer review. She tells Ripley how Jack took the gurney from his patient in the aid car and brought it to Andy. When he comes back he finds his patient digging for drugs. Jack tries to calm him down.

Dean is in for his peer review. He tells Ripley about how Jack is always 10 steps ahead. He restrained the drug seeker in the aid car after he punched through the glass to try and get drugs. Dean arrives to see them fighting. He helps out by holding down the seeker so Jack can fix his finger. Dean has trouble deciding who made the right call today.

Andy and Jack sit and wait to hear what is going on. Meanwhile, Ripley tells Ben his account was truthful and enlightening. Ripley tells Victoria he doesn’t need any more from her after her insubordination. Travis picks Andy. He thinks she is the better choice. Ripley tells Maya she would be a great candidate for captain.

Back to Dean, he tells Ripley he agreed with Andy’s decision. The team all meet back in the kitchen and talk about how they think it all went bad.

Ripley meets with Pruitt. Pruitt tells him he wouldn’t pick either one.