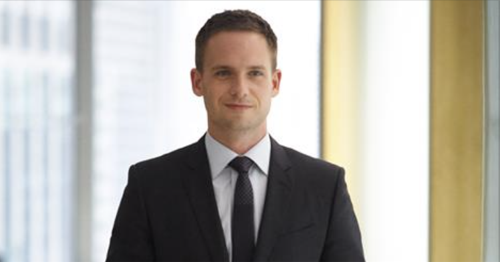 Tonight on the USA Network their critically acclaimed drama, Suits returns with an all-new Wednesday,  April 11, 2017, premiere episode and we have your Suits recap below. On tonight’s Suits season 7 episode 13 called, “Inevitable,” as per the USA Network synopsis, “Harvey is forced into a difficult decision when the impossible is asked of him. Mike and Rachel try to make time to discuss their future. Louis struggles with the rules of his relationship.”

Harvey makes Paula a cup of coffee. He tells her that the last few days have been rough but he isn’t going to keep stuff from her when he is scared. He thinks they need to go out tonight for a nice meal.

Louis and Sheila are role-playing. She is a burglar and he is the scared victim.

At the office later that morning, an old client Teddy shows up in Harvey’s office. He needs his help. The old company that he sold just laid all of their employees off. Harvey tells him he doesn’t have any legal rights at this point. Harvey heads to Mike and tells him what is going on. They need to work this together.

Louis comes into the office. He wants to know where his newspaper is. Gretchen tells him she has it because there is an announcement in there she doesn’t want him to see. Judging by his reaction, she guesses he is still sleeping with her. Louis tells her it is none of her business.

Mike comes to see Harvey. He has taken care of Teddy’s situation. Together they go to talk to the new owner of Teddy’s company. They offer him a deal to supplement him with cash so he won’t lay off everyone and sell. He laughs. He isn’t going to take their deal.

Mike and Harvey arrive at the office. Harvey wants to push the stocks down on his company. Donna wants to take a shot at it. She can persuade him.

Rachel comes to see Gretchen. She wants to know if Louis is seeing someone so she can put a plus one on her wedding invitation. She tells Rachel all about Louis’ situation.

Donna goes to see Stu, a stockbroker. She gives him a heads up on the situation.

Harvey’s mother calls. She is coming to the city. He invites her to have dinner with him and Paula.

Rachel asks Louis about his dating life. Louis admits to his relationship situation with Sheila. He doesn’t feel bad at all about it and he will not be taking her to the wedding.

Harvey tells Paula about his mother and dinner. She isn’t too sure about going. They just went through a big thing. He tells her this is a good thing.

Mike and Harvey take a call from the new owner of Teddy’s old company. He knows what they are up to.

Rachel and Mike go to meet the father about their wedding. Mike didn’t fill out the form. Rachel gets mad that he didn’t take the time to fill out the form. The father comes in and commends them. It’s the couples with all the same answers that worry him.

At dinner, Harvey, his mom and Paula all laugh. They had a good night, but Harvey’s mother tells them she needs to head out. She thanks Paula for encouraging Harvey to forgive her. She is glad she met the special person who helped him. Paula realizes she is talking about Donna. She gets mad.

At home, Paula tells Harvey her ex-husband cheated on her with a woman he worked with. She cannot go through this again. It is too hard.

Mike and Harvey meet with the owner of Teddy’s company. He refuses to budge unless they can offer him more.

Harvey’s mother calls him to apologize for saying what she said. He tells her they are fine. She doesn’t have to worry. Mike comes in. He tells him to take the day and think about what they can do. Harvey calls someone and asks them to meet him. He needs a favor.

Stu visits Donna at the office. He offers her a job with a lot of money. She tells him she will think about it.

Louis arrives at Sheila’s office. Her fiancé is there. Louis feels awkward. He gets out of there quick.

Donna goes to Harvey. She knows he is behind the Stu deal. He admits he was. He tells her about Paula. She gets angry. He has tried to find another way out of this but there isn’t one.

Donna comes to visit Paula at her office. She apologizes to her and tells her she has worked a long time to get her position. Paula asks her if she can promise it won’t happen again. Donna hesitates. Paula tells her that is why she doesn’t trust her. Donna leaves.

Harvey meets with Teddy. He thinks he has a plan. Harvey heads to the office to see Mike. He has convinced Teddy to buy back his company. Pension shares from his former employees can help.

Mike and Rachel talk about their future and what they each want.

Harvey arrives at his office, he finds Donna’s resignation. As he reads it Donna is in a cab leaving for good. Harvey chases after her but then goes to Paula. He breaks up with her. He heads to Donna’s and knocks on her door. She opens. He tells her she needs to come back. She agrees. He tells her that he and Paula have broken up.