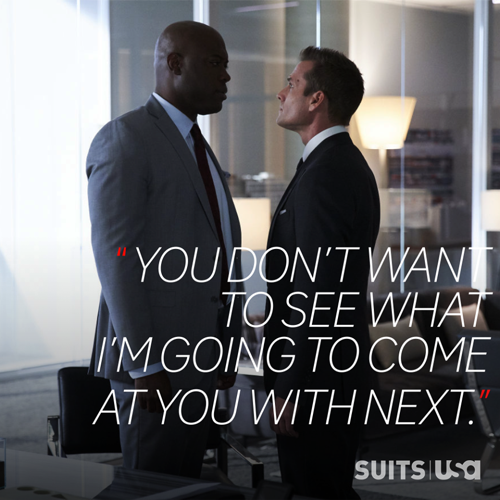 Tonight on the USA Network their critically acclaimed drama, Suits returns with an all-new Wednesday,  August 29, 2018, episode and we have your Suits recap below. On tonight’s Suits season, 8 episode 7, “Sour Grapes,” as per the USA Network synopsis, “Donna’s agreement forces Harvey to help David Fox. Alex comes to Zane’s aid on a personal venture.”

Robert calls Donna. He has a legal issue that is personal and he wants Alex. Meanwhile, David Fox comes to Harvey. He has a case for him. Harvey has no idea what he is talking about until David tells him Donna made a deal with him. Harvey finds Donna. He is angry. Donna tells him to suck it up and take one for the team.

Louis is in his office. Sheila is on the phone. She tells him she is pregnant. But she wants them to keep it quiet for now. Gretchen comes in. She knows Sheila is pregnant. After seeing Louis dance in his chair. He tells her he wants to get certified as a midwife. She laughs.

Harvey and David meet. David wants to buy a building that isn’t for sale and he needs Harvey to deal with it. Meanwhile, Alex meets Robert out in the country at a wine vineyard. Robert owns it and it currently nets zero.

Donna finds Samantha to suggest she help Harvey with his case. She agrees.

Alex tastes Robert’s wine and it tastes terrible. Robert lost his entire harvest and his barrels haven’t been delivered but his neighbors have received there. He wants Alex to go after them.

Harvey attempts to buy the building from a Mr. Billows for 25% over market share but he isn’t selling and especially to Fox. Harvey tells him he will be back.

Louis and Sheila are out for dinner. They argue over religion.

Alex delivers a lawsuit to the man who cheated Robert for lost revenue. The man tells Alex Robert was given a 30% discount because he was the new guy.

Samantha finds Harvey. She tells him she knows how to get the building. Meanwhile, Alex meets with Robert again. They talk about why Robert bought the vineyard but Alex doesn’t tell him anything about what he has learned.

Sam and Harvey head to the judge’s chambers. Harvey find out David has been laundering money and Sam knew about it. He doesn’t want to represent him anymore.

Robert and Alex meet with the man and his lawyer. Alex is suing him on a new set of charges after realizing Robert was offered cheap barrels of bad wine on purpose. They will press criminal charges. The man denies it. Robert knows it is about race. He loses his cool.

Harvey tells Donna he cannot represent David. He is laundering money and lying. Meanwhile, Donna goes to Sam to get her to do the job.

Alex tries to talk some sense into Robert before he goes on a tirade. Robert doesn’t care. He has been dealing with race issue for too long. He sends him packing.

Harvey finds David and confronts him about the money laundering. David admits he is paying a man thousands because he is his old mentor. He saved him and now he needs to get his building back. Harvey asks him why he pretends he is such a jerk when he is really loyal. Harvey tells him he will help him.

Sam and Harvey get to work on helping David. Robert calls Alex. He has had a change of heart after talking to Donna. He loves the community and since he is new to the wine community and his vineyard neighbors, he needs to be nicer.

Sheila and Louis make up after their fight. Louis’ sister called her to welcome her to the family. Sheila has had a change of heart. They can raise the baby Jewish. She has made a nice Jewish meal for them. She proposes to him. He accepts.

The next morning, Sheila has her period. It was a false positive. He comforts her, telling her all the more time for them to have the serious conversations. He tells her he told Gretchen.

Robert calls Donna to thank her for their talk. They might just be friends.

Harvey tells David that he has to pay more for the building. David is angry that he is going to look like a sucker. Harvey tells him to take it to help his mentor.

Donna and Sam talk about Harvey and Robert and how terrible they are with gift giving and gift receiving.

Louis tells Gretchen the sad news. She’s sorry. She will cancel the mid-wife lessons. They hug.