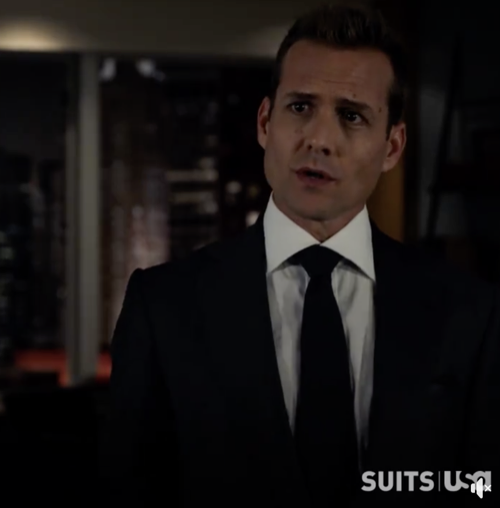 Tonight on the USA Network their critically acclaimed drama, Suits returns with an all-new Wednesday,  August 8, 2018, episode and we have your Suits recap below. On tonight’s Suits season, 8 episode 4, “Revenue Per Square Foot,” as per the USA Network synopsis, “Alex is caught between Harvey and Zane as Louis struggles to overcome a shocking setback.”

Sheila is trying to get Louis to make a baby, but he has a meeting. She demands it. Louis gives in. Alex finds Harvey and asks him about Samantha becoming the next name partner. Harvey tells him to sit tight and have faith. Alex laughs at him. Harvey wouldn’t sit back and wait. Louis walks to his dinner meeting. He is talking to Robert on his cell when a man approaches him with a gun and forces him into the alley. He demands his wallet and his phone. Louis doesn’t want to give up his phone. The mugger demands it or he’ll kill him. Louis hands it over. The man hits him in the back of the head with the gun and runs.

Louis is in the office looking at his wounds. Gretchen comes in. She is in shock. She is going to call Sheila and Robert. He doesn’t want anyone to know they might think he is weak.

Donna finds Harvey and asks him for help. She has a pro bono. He doesn’t have time. He tells her about Alex. She tells him he needs to do something to make Alex want to stay.

Robert gives Louis’ case to Samantha because he missed the meeting the other night. She doesn’t want it. But Robert demands it.

Harvey brings Alex to meet a possible new client to keep him happy and so he can get Robert’s attention. They meet with the woman, but she is asking them to go against one of their own clients. Harvey is up to hear more while Alex isn’t so happy to help.

Robert tells Louis he is off the case. Louis is angry. Louis finds Gretchen. He wants her to get all the files on the case Robert pulled him off of. She tells him the files were already sent to Samantha. He asks Gretchen for help. He already had his dignity taken away. Gretchen thinks he needs to put Samantha in a position where she is forced to give up the client.

Louis intervenes with Samantha’s client and the case. She catches on to what he is doing and allows him to help her. Meanwhile, Robert has heard that Harvey is using a possible new client’s illegal request against them by going to their enemy, also a client of the firms. Robert tells Harvey he shouldn’t be pitting them against each other and tells him he needs to stop. Harvey doesn’t care. He is going to sign who he wants. Alex asks him if they should really be doing this.

Harvey tells Alex he doesn’t care if Robert is top dog. Alex comes in the next morning to find Robert. He demands Alex sign the big client or it will cost him his job.

Samantha and Louis meet at court. He tells her the game plan he has come up with. She thinks it is genius. She steps out to take a call.

Donna comes to use the copier. She tells Alex about Robert throwing his authority around. Alex tells her what Robert has done to him and how he is in a no-win situation between him and Harvey. She tells him he needs to find a solution because where else is he going to get his name on the wall.

Louis is killing it in court when a gun is brought up. Just the mention sends him into a panic filled flashback. He loses his change of motion. Samantha finds him back at the office. She is angry. He tells her to get out. When she doesn’t listen he loses his temper and begins screaming.

Donna tells Harvey about her talk with Alex. She gets Harvey fired up. He goes to Robert ’s office and tells him not to bully Alex into submission. Alex comes in and tells them both that he handled it how he wanted. If they want a “yes” man he doesn’t want his name on the wall with them.

Samantha tells Harvey there is something wrong with Louis. Harvey goes to see Louis. Louis gets angry and breaks down and tells Harvey he was mugged. He can still feel the gun pressed to the back of his head. Harvey consoles him. He isn’t weak. He will tell Robert. Louis cries and thanks him.

Donna brings Robert a report. She tells him what she really does isn’t reports but keeping everyone happy and together. He almost lost Alex but thanks to her, he is staying. Robert sees that now.

Harvey goes to see Alex. They mend fences while arguing about how Alex thinks Star Trek is sh*tty. Harvey cannot believe what he is hearing.

Robert pays Louis a visit. Robert apologizes for coming down on him after hearing about him being mugged. He knows a little something. He helped his friends mug someone when he was 14. He has lived with that ever since. Louis’ mugger will face the same thing.

Harvey talks to Donna and learns she called their competitor about Alex. She could have lost them Alex, but she doesn’t care. Harvey and Robert needed to work their crap out.

On Louis’ walk home he sees Samantha waiting for him. She was mugged too and now she is going to teach him self-defense. He resists at first until she drops him to the ground.