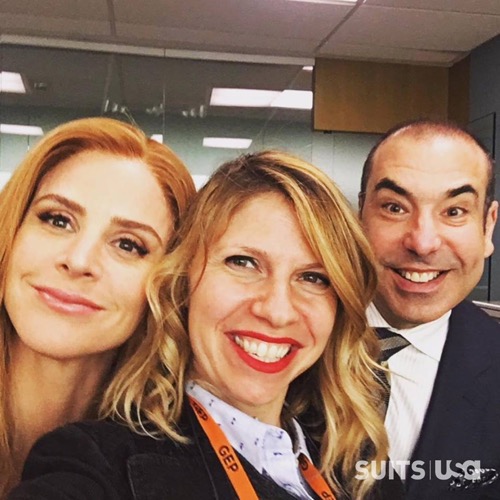 Tonight on the USA Network their critically acclaimed drama, Suits returns with an all-new Wednesday,  September 12, 2018, episode and we have your Suits recap below. On tonight’s Suits season, 8 episode 9, “Motion to Delay,” as per the USA Network synopsis, “An old foe backs the firm into a corner. Samantha and Alex try to broker a peace between clients.”

Alex gets a call from Gavin Andrews, they have a situation, one his of his transport flights was holding some art and one of the pieces got damaged. The art was expensive, and the insurance company said they would sue him for damages.

Lewis surprises Katrina with her own office, she has finally made senior partner, she thanks Lewis for fighting for her.

Alex goes to see Samantha and tells her they have a problem. Gavin’s insurance company is Samantha’s client, she tells Alex to just cut Gavin loose and get rid of a headache. Samantha says she knows that Gavin did something to that flight and she is not backing down.

Robert has a visit from Tommy and he says he is there to make him pay for what is owed to him, which is compensation for the firm he lost. Tommy says he is going to take them all down just like he did to him.

Tommy is suing the firm for 20 million dollars and accusing them of conspiracy. Harvey, Lewis, Donna, and Robert are discussing, Robert, says he is not giving Tommy one nickel. Robert ones them to go through every piece of evidence. Lewis says they should go to Eli Gold, Tommy’s old business partner.

Samantha goes to see Robert, he doesn’t like that both Gavin and the insurance company are their clients and he is hoping she is not asking for Alex to drop his client. Samantha says Gavin is not worth the headache. Robert tells her to speak to Alex, stop acting like children, speak to both their clients and resolve this.

Katrina asks Brian to be her associate. He asks her if it is a good idea that he works for her because they have become closer. The two agree to work together and put their personal lives aside.

Donna goes to see Harvey, she says Eli Gold is not the only person they should be visiting, they should go see Frank Gallo’s daughter.

Samantha goes to see Alex, tells him what Robert said. He says he is not backing down, she is asking him to make peace.

Lewis goes to see Eli Gold, he offers him a gift, a recording that Alex made. which could cost him his license. Lewis asks him to get Tommy to back off in return. Eli is furious, he tells Lewis he is going to pay and to get out of his house.

Katrina and Brian are working late, he says that the case is bullshit but doesn’t she want the first case to be a guaranteed win. Katrina says this case is for a friend of hers, that is why she picked it.

Donna goes to see Denise Gallo, wants to know if a man named Thomas came to see her about the money she received from her father. She says he came to her to ask about the money she received from her and she doesn’t know what her father did to get that money. Donna tells her that she wants her to testify, her father tried to redeem himself before he died. Denise says she doesn’t know the father who was redeeming himself, she knows the one that lied, cheated and stole.

Back at the office, Lewis tells Harvey and Robert, it didn’t work with Gold, then Donna piles on the more bad news, Galo’s daughter is no help. Eli walks in, he asks for the recording back, admit what they did and 5 million dollars, he will convince Tommy to back down. Eli wants this to go away as much as them, he tells them that this is going to be the best that they can get. Robert thinks the whole thing is a good cop, bad cop bluff and plans on shoving it down Tommy’s throat.

Katrina and Brian go to see the women who are copying her friend’s designs, the meeting doesn’t go well.

Alex and Samantha meet with their clients altogether. They all get into an argument, the insurance company and Gavin both are angry and don’t want to give in. Gavin gets up and says he is not signing any deals with anyone, they can take him to court.

Alex speaks to Harvey, he tells him that he is going to court with his case.

Samantha goes to see Lewis, Alex is trying to get her kicked off her own case. Samantha reminds Lewis that he owes her a favor and wants Gavin dropped.

Robert goes to see Tommy, he tells him that he is not taking his deal. Robert says he talks a good game, but it is not going to work. Robert says that all he has to do is play the recording of Frank Gallo calling him out.

Lewis goes to see Harvey, he tells him that Samantha wants them to drop Gavin. Harvey says he has had enough of Samantha.

Alex is angry with Lewis, he found out that Lewis called Gavin and told him they are dropping him. Lewis says he had to do it, he and Harvey are referring him for named partner.

Brian and Katrina are out to dinner, he toasts their case because Brian was able to refer to a case of plagiarism with music that they could compare it to, where the original writer won the case.

Harvey goes to see Robert, he tells him that Samantha is out of control. Donna walks in, she tells them that he just sent over a court date. Lewis says he knows why Tommy did it.

Brian is in early with Katrina, the fashion company who copied her friend’s designs have bribed the manufacturer. Katrina blames herself for letting Brian to take her out to party the night before when she should have been working.

Katrina goes to see Harvey, she tells him the only way she can her case is to bluff but is not sure if she can pull it off. Harvey says to think of something else then.

Harvey goes to see Tommy, he says he knows what is going on, he is diagnosed with cancer and has one year to live. Harvey says they are going to file one motion to delay after the other, Tommy will never even be alive to see the outcome. Tommy tells him to get the hell out, he will see them in court.

Brian is with Katrina, he gives her a file that the fashion company colluded with the manufacturer. Brian tells her that his job is to push back, but it is also to have her back.

Harvey tells Robert about Tommy’s cancer. Robert says to delay this thing as much as possible. Lewis walks in and tells them there is nothing to delay, Tommy is dead, he had a heart attack. Robert asks for a minute to process this, he knew Tommy for thirty years.

Katrina tells Brian that he came through for her in every way in this case. Katrina says that she made reservations for dinner, he says he can’t, he has to go home to his wife and baby but would love to have a rain check.

Donna goes into Samantha, she says that the thing between she and Alex is causing a huge problem. Then she asks Samantha if she will put behind her wanting to be named partner and let Alex have it first. Donna tells her to have the promise put in writing. Samantha says she is not backing down because she thinks she is better than Alex.

Lewis goes to see Katrina, congratulates her on her win and gives her a gift, a plaque. Lewis can see that something is wrong, he tells her that she can’t force things in her private life, it is unpredictable. Lewis asks her to dinner to celebrate, but she wants to stay and catch up on work.

Robert is drinking a glass of scotch when Harvey walks in. Harvey wants Alex and Samantha to fight. One case, head to head, the winner gets named partner. Robert says to let them fight.