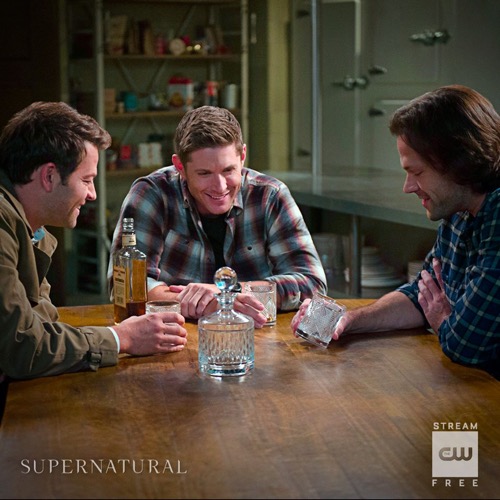 Supernatural airs tonight on the CW with an all new Thursday, December 13, season 14 episode 9 Fall Finale called “The Spear,” and we have your Supernatural recap below. On tonight’s Supernatural episode as per the CW synopsis “Sam and Dean enlist the help of their pal Garth to gain inside information on what Michael may be planning. The brothers split up to each go after weapons that can aid in their fight against the Archangel, but this may be a fight our heroes cannot win.”

Kansas City – Blood is all over the floor of a business suite. A man tries to run to the elevator but is intercepted by a vampire. After he kills the man the vamp heads to report to his boss, Michael, who is disguised in a woman’s body. New recruits are brought in. One of them is Garth. Michael recognizes him after spending time in Dean’s head. Garth tells him that he has a family now and he may be friends with Dean but he needs to be on the winning side for his family’s sake. Michael has something vicious planned for the city.

Back at the bunker, Jack is up in the middle of the night eating sugary cereal. Something Sam told him was bad. Cas comes in and catches him. He won’t tell. They talk. Cast doesn’t want Jack to tell Sam and Dean about his deal with the Empty. He has some time.

Garth calls Sam and tells him all about meeting Michael and the others. He tells Sam they want him to drink blood mixed with Michael’s grace. Before Garth can finish one of his fellow recruits calls him. He tells Sam he has to go. Dean walks in and Sam tells him that Garth is in as their spy but if things go sideways it’s on him. Dean reassures him that they are one step ahead of Michael and everything is going to be fine. Ketch calls. They all go to video chat with him. Ketch has put the weapon for Michael in the mail. Dean is beside himself. Sam tries to make Ketch understand they need it now.

Garth waits in the waiting room with a new recruit. He tells Garth his friend made the change too by drinking Michael’s grace and now he is indestructible. Michael’s right-hand woman comes in and gives them each some grace. She makes sure they drink it. Garth can’t find a way to spit it out so he swallows it. He listens to Michael and his helper talk. They have plans to get a spear at a recycling facility in Kansas City. Garth calls the guys and tells them. They come up with a plan and hit the road.

Cas and Dean arrive at the recycling plant. They need to get the spear. Can reminds Dean this is a risk. Dean accepts that. They head into a warehouse. Meanwhile, Sam and Jack break into the courier office to get the weapon.

Cas and Dean look around and don’t see anything strange. Meanwhile, Sam gets attacked from behind while a vamp takes Jack. Michael comes out from the courier office.

Michael throws Sam up against a truck and melts the weapon right in front of him. Michael returns to the office to find Garth. They need to talk.

Cas and Dean turn around to find Kaia’s doppelgänger. She is there with the sword. She has been harassed by Michael’s people. Dean makes a deal with her – jack will get her back home if she will let Dean use the sword to kill Michael. She agrees. Sam calls and tells them Michael has Jack.

Michael has brought Jack back to the office building he has been staying at. He assumes Jack doesn’t have any powers and tells him all about how he plans to turn everyone in Kansas City. One day jack will understand when his powers come back and grow stronger and stronger.

In a parking garage, Michael’s vamp gives new recruit directions. The recruit runs. Sam comes out of nowhere and kills the vamp as well as Michael’s helper in the office. Sam finds Jack and unties him. The door begins to open..it’s garth. They all had to leave but suddenly garth changes. As he transforms he apologizes to Sam. They fight. Sam chokes out Garth till he passes out. They tie him up and put him in the trunk. Cas and Dean arrive. They all decide to go upstairs to the office suite and take out Michael.

Cas goes in first but within seconds Michael can feel his presence. He attacks Cas. Sam and Jack jump out of nowhere and are no match for Michael. Dean comes in with the spear. He fights Michael and manages to slash his arm but in the end, he takes a pause and then breaks the spear. He is no longer Dean, but Michael and now he has an army. Dean is gone, he tells them as they watch in shock.