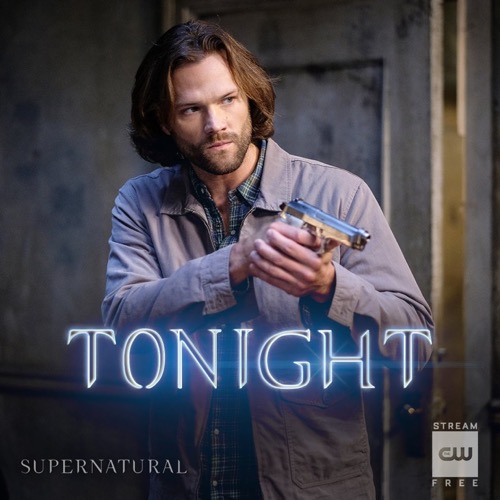 Supernatural airs tonight on the CW with an all new Thursday, October 18, season 14 episode 2 called “Gods and Monsters,” and we have your Supernatural recap below. On tonight’s Supernatural episode as per the CW synopsis “When Coach Spitz produces a play about his life, Booker is certain he is right for the role. Unfortunately, he has a vision of Coach Spitz kicking him out of the play.”

Michael is still in Dean’s body. Working an abandoned house, he is picking off his victims one by one, feeding them bloody potions.

Sam, Cas, Bobby and Mary pick on news reports in Duluth, Minnesota where piles of bodies are turning up. They think it is Michael. They tell Cas he has to stay behind. Michael will pick up on his angelic presence. Jack will stay to and work on getting powerful again.</p

At the coroner, Bobby, Sam, and Mary look at the bodies which have internal trauma and their eyes burned out. Michael kept the people alive for a while. They discover that they are all vampires. The coroner tells them how a young lady stopped by to ID the victims but said she didn’t know any of them and left.

Cas tries to talk to Jack about how he should focus on what he has. Jack gets irritated. Cas tells him he has personal experience when he lost his grace. He tells him about how Sam and Dean were born with no powers but they have developed skills over time.

Michael looks in the mirror. Dean is in there yelling for him to get out. Michael chuckles. He tells him to enjoy the ride.

Sam calls Cas to give him an update. Cas has no idea what Michael is doing with vamps. Nick comes in. He is upset. There is nothing about his family, nothing about the case. It was never solved.

Sam, Mary and Bobby track down the girl from the morgue. She is a vampire who is in hiding because Michael has been killing her kind. He seemed like he was experimenting or something, she tells them. Bobby moves forward to kill her. She screams, she can tell them where he is.

Michael has a date with a lady in a red dress. They sip wine in a hotel room. He picked her up at a bar. She swears she isn’t that kind of girl. But he knows she is. He grabs her by the neck. She shows her fangs. He tosses her across the room and tells her to command her master.

Nick is pacing in the bunker. He is beside himself that no-one cares that his family is dead. Cas sympathizes with him and then tells him he is lucky. He explains that he is occupying a body. The body of Jimmy and he gave his blessing. Nick thinks he is just as bad as Lucifer. Cas heads out to see Jack but tells Nick what happened to Jimmy and his family is still his greatest regret.

Michael meets with Philippe. They drink wine and talk about how humans are vermin. Michael tells him how God has checked out. They should team up and make a world where humans are slaves.

Jack goes to visit Kelly’s parents and tells them he is a friend. They talk about how they haven’t seen her in a long time since she works for the government. They show him baby books. He reveals that Kelly had a baby, a son. She is a great mother. Jack gets choked up. They tell him if he sees Kelly to tell her hello.

Michael shows up at Lydia’s. He wants to know about the hunters. He let her escape so she would lead him to them. He kills her.

Jack comes home. Cas lectures him that what he has done is dangerous. Not only meeting them but being out there with no powers. He wanted to tell them he is their grandson. Cas thinks sparing them was kind. Cas tells him how they think they have Michael and will use spells to subdue him. Jack scoffs. They need to kill him. Dean wouldn’t have it any other way.

Nick meets with an old friend named Arty. He talks about his family and how after they were killed he left. Nick recalls that Arty told the police he saw the man leave his house the night his family was killed. Arty confesses that what he saw was not a man. Nick drills him for more information. Arty gets nervous. Nick threatens him. He wants to know who paid him off. Arty swears he doesn’t know anything.
Sam, Bobby and Mary show up at Michael’s last location where he was experimenting. Suddenly werewolves come out of the woodwork. The silver bullets are working. All three of them do their best to fight them off with axes. After killing them they talk. What kind of werewolves were they? Silver did nothing. Michael arrives. They all go silent. Dean talks. It is him. Dean tells them Michael has left his body and he has no idea why. They are all confused.

Nick looks at himself in the mirror. He is upset, ashamed, bloody and holding a hammer.