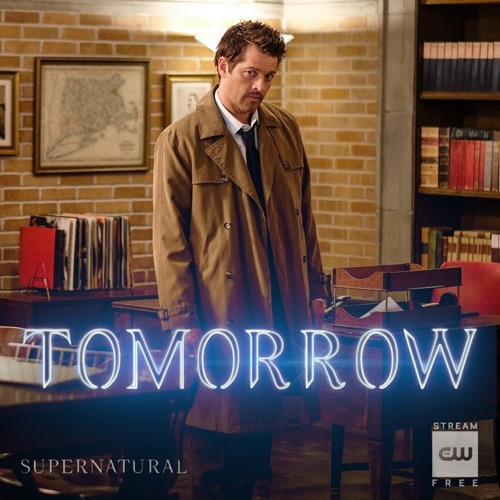 Supernatural airs tonight on the CW with an all new Thursday, October 25, season 14 episode 3 called “The Scar,” and we have your Supernatural recap below. On tonight’s Supernatural episode as per the CW synopsis “Still trying to solve the mystery of what happened to Dean, Sam enlists the help of Jody Mills who may unknowingly already be on the case. Castiel continues to be a father figure to Jack, who surprises even himself, when a life is on the line.”

Dean is giving Sam a hard time about his beard. Duck Dynasty called. Sam really wants to know if Dean is okay. He is and he doesn’t remember a thing. So he doesn’t need to worry. He is just happy to be home until he comes into the library and sees everyone. Jack runs over and hugs him. Cas comes too. He wanted to be there for him, he tells Dean, but Michael would have detected him. Bobby and Mary stayed back to clean things up in Duluth. Cas tells Sam Nick is gone. They ask if Dean is really okay after he heads to shower.

Dean undresses in his room angrily. He finds 2 scares on his arm. Later, he shows Cas and Sam. He wants Cas to get in his head and drag it out. Dean sees himself as Michael being stabbed in the arm by a strange dark figure.

Sam calls Jodi. They all say hi to her. She is happy to hear from Dean. They think the thing that killed Kaia is here. He tells her he has 2 big gashes. Jodi knows what he is talking about. She looks at a cork board in her office with photos of victims with similar gashes.

Dean and Sam tell Jack he needs to stay behind. He gets mad. Jules comes in with a teen girl. She saved her from a witch and the girl has been hexed. Cas will stay behind to help the girl. Sam and Dean hit the road. In the car, Sam tells Dean they need to deal with the Michael thing and he needs to talk about it. Sam tells him he needs to slow down so they can talk. He was gone for weeks and he didn’t know if he was even alive.

They arrive at Jodi’s. They hug her hello. She likes Sam’s beard. The girls are doing good. She shows them a map of where all the headless bodies were found. They start looking right away. Meanwhile, Jack packs a bag and leaves a note.

Cas and Jules work on the teen girl, Lora. Jack stops to see them before he sneaks out. They tell him about Lora and how they need to reverse the spell.
Dean wants to split up, but Jodi and Sam want to stick together. They keep looking through the woods. Dean finds three heads on sticks. They are all vampires. They find a fire nearby with a food can. Suddenly they are under attack by someone in black with a forked sword. She takes off. It looks just like Kaia, they all agree.

Jack sits with Lora to comfort her. She tells him how she ran away so now her mom probably hates her. The witch took her in with 2 other girls. She was nice to them and fed them but then she got mean and locked them up. Both of the other girls were hexed and withered away to nothing. Jack tells her that Cas will fix this.

Sam thinks Michael sent the vamps to try and kill Kaia. Those vamps were like the ones Jodi tested that were immune to dead man’s blood and silver. Dean has a plan. Meanwhile, Cas and Jules chant while creating a potion. It makes Lora worse.

Sam and Jodi talk while Dean leads. Sam doesn’t think he is ready for this case. Meanwhile, Kaia is in a cabin. She takes a sip of water and grabs something in a bag. When she comes out of the cabin, Dean knocks her out.

They strap her to a chair. She tells them she isn’t afraid of them. She is afraid of the monsters he keeps sending after her.

They couldn’t help Lora. Jack cries. If he had his powers he could have saved her. He thinks he knows what to do. They go to see the witch’s body. The bullet is still in her. Meanwhile, Jodi wants to take Kaia back to the station. Dean wants to torture her. They need to get the weapon she uses. It hurt Michael. Dean goes crazy. Kaia accuses him of being just like Michael. Meanwhile, Jack thinks if they break the witch’s necklace it could help Lora. She is wearing the same necklace. He breaks it and Lora rises.

Dean doesn’t know what to do when Kaia’s look alike accuses him of being fearful. She has seen it before. She is a dream walker just like Kaia. She tells Dean Michael hurt her too. Dean starts to remember. Jodi looks out the cabin window and sees some of Michael’s monsters headed their way. They want the weapon too. Sam, Dean, and Jodi fight them and eventually take them out when Kaia’s doppelganger helps. Jodi’s arm is injured. She thinks it is broken.

On their way back, Dean tries to apologize to Jodi. She tells him it is okay. She is going to have to tell Claire. She is sad she didn’t get a chance to get to know Kaia before she died. She feels like she lost before she even began.

Cas tells Jack that Lora is going home to her mom. Cas apologizes that he has been going through a lot and he hasn’t really been there for him. He is proud of him. He did a lot today without his powers. He has the mind of a hunter. Maybe Sam and Dean will let him g on a hunting trip. Jack begins to cough a lot. He tells Cas he must be getting a cold.

On the way home, Dean tells Sam he was right. He didn’t want to even think about how Michael used him. He put them all into danger. He said yes to Michael so this is all on him. Meanwhile, Jack coughs up blood alone in his room.