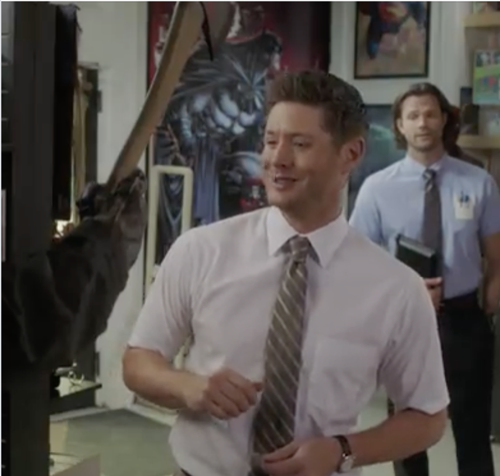 Supernatural airs tonight on the CW with an all new Thursday, November 1, season 14 episode 4 called “Mint Condition,” and we have your Supernatural recap below. On tonight’s Supernatural episode as per the CW synopsis “Still trying to solve the mystery of what happened to Dean, Sam enlists the help of Jody Mills who may unknowingly already be on the case. Castiel continues to be a father figure to Jack, who surprises even himself, when a life is on the line.”

An employee named Stuart at a comic book store unpacks inventory. His supervisor Sam calls and yells at him for a  bad Yelp review. He gets ready to go home and shuts the lights before locking the doors. A scary mannequin with a hatchet looms in the corner.

At home, Stuart’s action figure comes to life and strikes him with a weapon in the face. Meanwhile, Dean watches a horror marathon on TV while eating pizza in his room. Sam comes in. Dean makes fun of him now that he has no beard. Sam wants to know why he really hasn’t come out of his room. Dean tells him that Michael and Kaia are in the wind, Cas is busy with Jack and there are a bunch of strangers in their house. Sma has a case for them – a killer toy. Dean wants in. They hit the road.

Dean and Sam arrive at the store. Sam, the store supervisor, offers to help them after they walk around. Dean sees the hatchet man and wants it. They pose as insurance agents, asking for Stuart. She tells them he has been staying at his mom’s and gives them the address. They show up there and talk to Stuart. He tells them he made the killer toy incident up. They don’t believe him. Stuart kicks them out.

Dean and Sam plan to come back after they leave so they can look around the house. While they wait, Dean wants to know why Sam hates Halloween. Sam doesn’t explain. They see Stuart’s mom leave. Seconds later, Stuart comes out on the front stoop bleeding. They help him before heading in. Dean looks around and only finds blood splatter.

At the hospital, Dean and Sam visit Stuart. His mother is there. Dean stays behind while Sam goes to look around their house.

Dean sees the little blue action figure in Stuart’s room. It doesn’t register any EMF. Meanwhile, Dean talks to one of Stuart’s best friends who has come to visit. They watch and talk about horror movies while the marathon runs on TV. They see the hatchet man and get excited, reciting lines from the movie.

Sam visits Sam at the comic store. She tells him about the employees mentor Jordan who died from cancer. Jordan left Sam and another employee the store but not Stuart. They had their differences. She hired him back. Sam wants to know where Jordan is buried. She tells him Jordan was cremated. Suddenly the room goes cold. He tells her to leave. The hatchet man comes out of nowhere and strikes Sam, knocking him out.

Sam comes to, the store owner Sam is hiding next to a counter, frightened and confused. She asks Sam what just happened. He tells her that he thinks the ghost of Jordan might be trying to kill Stuart. He took off with the guys to the store. They try to get out but the glass in shatter proof. Meanwhile, Dean is having fun eating and drinking junk food while watching the marathon with Stuart’s friend.  Sam calls and tells him what is going on. Dean makes a salt line and tells Stuart’s friend what is going on.

Sam and Sam try to get out of the store as the hatchet man walks down the street. Back at the hospital, Stuart’s friend sees his own breath. A ghost begins to shake and rattle things, tormenting them. Dean grabs a hatchet while Jordan goes to attack Stuart’s friend. He yells fro help but Dean is busy and the security guards are watching the horror marathon.

Sam and Sam blow the door off with a lunchbox full of chemicals. Meanwhile, Jordan finds Stuart and Sam in the morgue. Dean tries to reason with Jordan as he holds a hatchet. Jordan isn’t interested. They fight.

Sam tells Sam that the only real thing left behind of Jordan’s is a key chain. They track him down and find him strangling Dean who grabs the keychain off of his body. Sam and Sam light it on fire. Jordan lights on fire before he shrivels up and falls to the floor.

On the way home, Dean thanks Sam for getting him out and on a job. Sam tries to explain to him that he needs to stop blaming himself for the Michael situation. He did it for his family. Sam finally admits he hates Halloween because he threw up in front of his crush. Dean laughs. Next year they are going to do Halloween right.