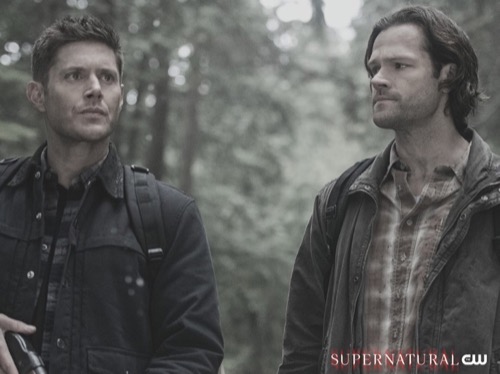 Supernatural airs tonight on the CW with an all new Thursday, November 8, season 14 episode 5 called “Nightmare Logic,” and we have your Supernatural recap below. On tonight’s Supernatural episode as per the CW synopsis “A hunt gone wrong leaves Maggie’s whereabouts unknown. Sam, Dean, Mary and Bobby race to find her, but what they find are their own worst nightmares.”

A young girl goes out to the woods and videotapes herself entering a famous haunted location. She has a large knife at the ready as she looks around with a flashlight. Something in the dark comes at her.

Sam is updating the team when Dean comes in. Dean gives him a look. Sam sends them on a mission. Dean teases him that he has a camp counselor vibe going on. Sam’s phone sounds. One of their own is missing, a younger hunter named Maggie. Sam gets on her body cam footage. They see her attacked. It looks like a ghoul. They head out to try and save her.

They arrive at a family cemetery. They find drag marks. Someone yells hello. Its a man, associated with the family. They tell them they are with the HPS. He is surprised. He has two other employees from the Historical Society in the house. They come in to see Bobby and Mary. The man tells them he isn’t the owner of the house, Mr. Rawlings is. He is his nurse. He shows them Mr. Rawlings who is ill in a hospital bed hooked up to machines. He had a stroke Meanwhile, Maggie is dangling from a set of rafters by her wrists in a dark place.

Mr. Rawlings daughter arrives. She tells them she had has enough going on, they need to leave. Outside the 4 of them argue. Bobby is mad Sam let Maggie go hunting solo.
Mary and Sam team up while Bobby and Dean go off into the woods. Sam thinks Bobby may be right. Mary tells him she is proud. Bobby just has his walls up and doesn’t always come off great. They see something as they walk.

Sam and Bobby find a cabin. They look around and find clothes and other items. Dean finds a body. Just as he goes to get Bobby outside, a man charges at him. He grabs something and stabs him. The man evaporates into dust. At the same time, Sam and Mary find the ID of a hunter with clothes.

Inside the house, Mr. Rawlings’ daughter hears a noise. She heads upstairs. Something lunges at her and then disappears.

Mary and Sam go back to the house. The daughter tells them what just happened. They explain that they hunt monsters. Dean comes in without Bobby. Mary asks where he is. At the truck, Dean tells her. She runs to find him. Meanwhile, Dean talks with the daughter who is having a hard time with the revelation that there are monsters.

Sam finds Maggie. She tells him to watch out. A vamp comes at him. Sam stabs him. He turns into dust. Meanwhile, Bobby gets attacked in the woods by the same thing. Mary comes up. They fight him. Bobby stabs him and he turns into dust.

Dean comes in the room to see Mr. Rawlings nurse giving him a blood transfusion. Dean tells him a daughter to leave the room. He takes his gun out. He knows what is going on. The man admits he is taking the blood not giving it. He’s a djinn. And he recognizes Dean as Michael. Dean tells him he is no longer him. They fight. The man tells him that Michael made more traps just like him as Dean kills him.

Dean fixes Mr. Rawlings. The daughter is happy. Dean tells her that she might get an apology after all from her dad who worked a lot when she was young. They all head home.

Back at the bunker, Maggie is welcomed back. Dean tells Sam it was all him who got her home safe.

Bobby tells Mary about his wife and son. They are gone now. Mary tells him they will find a way for him to go on. They get ready and get back out on the road.

Sam and Dean start calling the other hunters about the new supercharged monsters. Sam reassures Dean that they will find Michael.